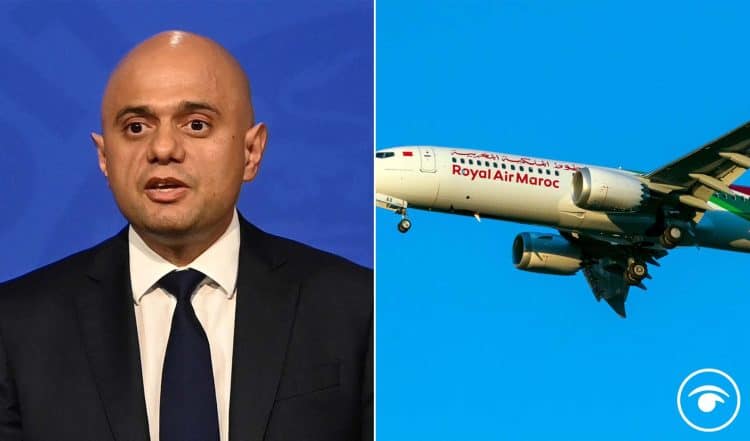 The Government has no current plans to implement its Plan B for tackling coronavirus, the Health Secretary has said, adding that ministers do not believe the pressures on the NHS are unsustainable. It comes as Morocco has banned flights from the UK as the number of Covid cases rises.

In his first ever Downing Street press conference, Sajid Javid repeated his warning that Covid-19 cases could reach 100,000 a day as the country enters a challenging winter period.

He said the UK was seeing “greater pressure” on the NHS but said the Government will “do what it takes to make sure that this pressure doesn’t become unsustainable, and that we don’t allow the NHS to become overwhelmed.”

Deaths “remain mercifully low” at the moment, he said, but added: “We’ve always known that the winter months would pose the greatest threat to our road to recovery.”

He added: “Thanks to the vaccination programme, the link between hospitalisations and deaths has significantly weakened, but it’s not broken.

“So we must all remember that this virus will be with us for the long term and remains a threat to our loved ones, and a threat to the progress that we’ve made in getting our nation closer to normal life.”

Latest Government figures show that a further 179 people had died within 28 days of testing positive for Covid-19 as of Wednesday.

Hospital admissions stand at 868 on average per day over the last seven days, up from 780 a week earlier, a rise of 11%.

Earlier, Matthew Taylor, chief executive of the NHS Confederation which represents health bodies, warned “we risk stumbling into a winter crisis” unless measures such as face masks and vaccine passports – the Government’s “Plan B” for the coming months – are introduced in England.

Mr Javid told the Downing Street press conference the Government was concerned about the number of cases, but that vaccines were “clearly working” when it came to hospital admissions and deaths.

Asked about unsustainable pressure on the health service, he said: “We don’t believe that the pressures that are currently faced by the NHS are unsustainable.

“Don’t get me wrong, there are huge pressures especially in A&E, in primary care, for example, as well, but at this point we don’t believe they are unsustainable.

“If we feel at any point it’s becoming unsustainable then the department, together with our friends in the NHS, we won’t hesitate to act.”

Dr Jenny Harries, the chief executive of the UK Health Security Agency (UKHSA), said the UK is going into winter with a “really high level” of cases.

“What we can see is that the cases now are almost as high as they were in July and actually not far off where they were last winter,” she said.

“What we are not seeing is that dip down again at the other side of the peak and that is really important because we are kicking off the winter at a really high level of cases.

“Fortunately that is not currently working through into serious disease and deaths.”

However, she later said the last two days have seen the highest death rates for some time, adding that the number of deaths are “moving in the wrong direction”.

Morocco is banning flights to and from the UK due to rising coronavirus case rates.

Airlines cancelled several flights between the countries on Wednesday ahead of the suspension coming into effect at 11.59pm.

Latest figures from the European Centre for Disease Prevention and Control show that the North African nation’s weekly rate of reported coronavirus cases on October 14 stood at just 10.4 per 100,000 people.

EasyJet cancelled two flights from Gatwick and Manchester to Marrakech on Wednesday, but will operate flights in the opposite direction to bring passengers back to the UK before the ban comes into force.

The airline said in a statement: “We are still awaiting clarity from the Moroccan authorities as to whether we are permitted to operate repatriation flights beyond midnight today.”

British Airways cancelled flights between Heathrow and Marrakech, which were due to resume on Thursday after being suspended due to the pandemic.

The flight ban will affect families in England and Wales who booked half-term holidays in Morocco for next week.

Morocco’s National Office of Airports said the policy will remain in place “until further notice”.

The country is also banning flights to and from Germany and the Netherlands.