Iain Duncan Smith's mail artilce today was titled...“In the 1940s they kept coming to the office – even when Hitler’s bombs were raining down." 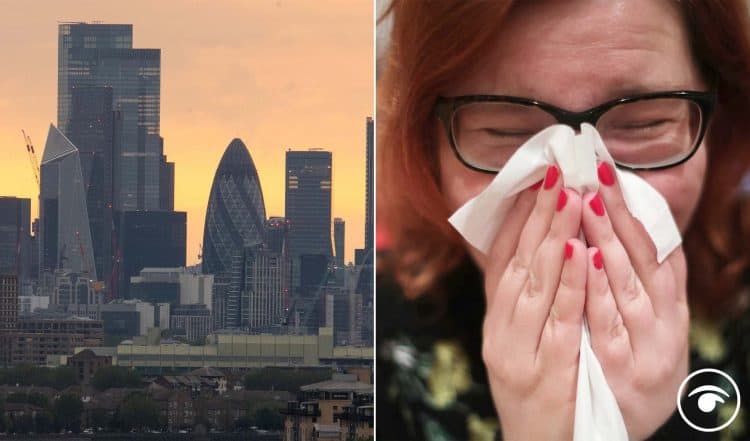 Workers are being urged not to grin and bear illness this winter but instead stay away from the office if they are feeling unwell.

As the UK prepares to face the flu virus spreading alongside Covid-19 in the coming months, people are being encouraged not to take the somewhat traditional approach of just getting on with it, but rather to avoid the workplace if they are sick.

It comes as Iain Duncan Smith’s article in the Mail on Sunday led with a title “In the 1940s they kept coming to the office – even when Hitler’s bombs were raining down”, former Tory leader Sir Iain Duncan Smith said “all too many” civil servants and government employees “have failed to see Covid as a challenge’.

“And instead of rising to that challenge, as the wartime generation would have done, they have thrown their hands up in despair – before locking the doors and scuttling off home, of course.”

The front page was just as crazed.

UK Health Security Agency chief executive Dr Jenny Harries said she hopes the public will now realise when they have symptoms that might be infectious and can be supported in staying away from work in those situations.

She told Times Radio: “I think, particularly as we approach the flu season for example, whereas people traditionally in the UK have sort of grinned and borne their infectious disease and then gone into work and spread it around, I’m hoping that, as we go through winter, people when they are symptomatic will generally recognise that and stay away and be supported to do so.”

On the general point of people no longer working from home, she said there is likely to be a rise in Covid cases if everyone returns to work immediately, but added that the double-vaccinated are generally protected from getting seriously ill with the virus.

“If everybody returned immediately to work without due consideration, then I think it’s likely we would see more cases over a short period of time, depending on whether they were wearing face coverings, whether they were taking appropriate precautions,” she said.

“But, of course, most people are protected now, so even people who are doubly vaccinated are becoming infected, (but) they are not becoming seriously ill and they are not dying in the way that we saw previously.”

There have been increasing calls for people to return to offices, after the pandemic caused a widespread switch to working from home.

At the recent Conservative Party conference Prime Minister Boris Johnson issued a fresh call for workers to return to “buzzing” town centres, adding “we will and must see people back in the office” as he continued his drive to end working from home.