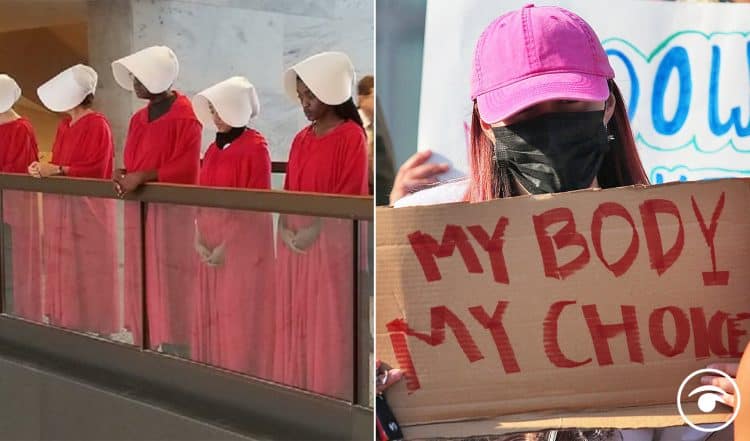 A divided Supreme Court is allowing a Texas law that bans most abortions to remain in force, stripping most women of the right to the procedure. The news made Handmaid’s tale and Gilead trend as people compared the new law with the dystopian TV show.

What makes the Texas law different is its unusual enforcement scheme. Rather than making officials responsible for enforcing the law, private citizens are authorised to sue abortion providers and anyone involved in facilitating abortions.

One example would be anyone driving a woman to a clinic to get an abortion.

Under the law, anyone who successfully sues another person would be entitled to at least 10,000 US dollars (£7,270).

Abortion opponents who wrote the law also made it difficult to challenge in court, in part because it is hard to know who to sue.

The court voted 5-4 to deny an emergency appeal from abortion providers and others that sought to block enforcement of the law that went into effect on Wednesday.

The Texas law, signed by Republican Governor Greg Abbott in May, prohibits abortions once medical professionals can detect cardiac activity, usually around six weeks and before most women know they are pregnant.

It is the strictest law against abortion rights in the United States since the high court’s landmark Roe v Wade decision in 1973 and part of a broader push by Republicans across the country to impose new restrictions on abortion.

Joe Biden said the law “outrageously” gives private citizens the power “to bring lawsuits against anyone who they believe has helped another person get an abortion”.

Marc Hearron, a lawyer for the Centre for Reproductive Rights, told reporters that “as of now, most abortion is banned in Texas”.

Mr Hearron said his group and the abortion providers it represented were still hoping to hear from the Supreme Court.

Abortion providers who are asking the Supreme Court to step in said the law – signed by Republican Governor Greg Abbott in May – would rule out 85% of abortions in Texas and force many clinics to close.

Twitter was awash with people comparing the new law to Gilead, the fictional state from Margaret Atwood’s 1985 book the Handmaid’s tale, which has become a very popular TV show.

TX Republicans think masks and vaccines violate their right to control their bodies, but allowing anyone to sue an Uber driver for taking a woman 7 weeks pregnant after being raped by her uncle, to get an abortion, that’s legal. Even if you’re Pro-Life, this is Gilead-type stuff.

I usually hate The Handmaid’s Tale comparisons, but at midnight tonight, individual Texans can rat out (and sue) people who do as much as drive someone to get an abortion—that feels adequately like Gilead.

People will die because of this law. Dark times.https://t.co/wJrYS1trai

America: Not quite Gilead, but working on it.

Texas is the new Gilead. You get 10k to turn your neighbor in. A woman has no right to her body. And it all happens quietly. The Supreme Court is on vacation. Like what the hell is going on. @ACLU @neal_katyal.

Gilead wasn't built in a day.

Roe vs. Wade has practically been overturned without a case ever coming before the Supreme Court.

Apparently, this is how the law is determined in modern Gilead.