Giant dinosaurs bigger than a double decker bus roamed the Isle of Skye 170 million years ago, say scientists. Dozens of footprints belonging to early sauropods – the largest animals ever to walk the planet – have been unearthed in a lagoon on the remote Scottish hideaway. Others were made by the older theropod cousins […] 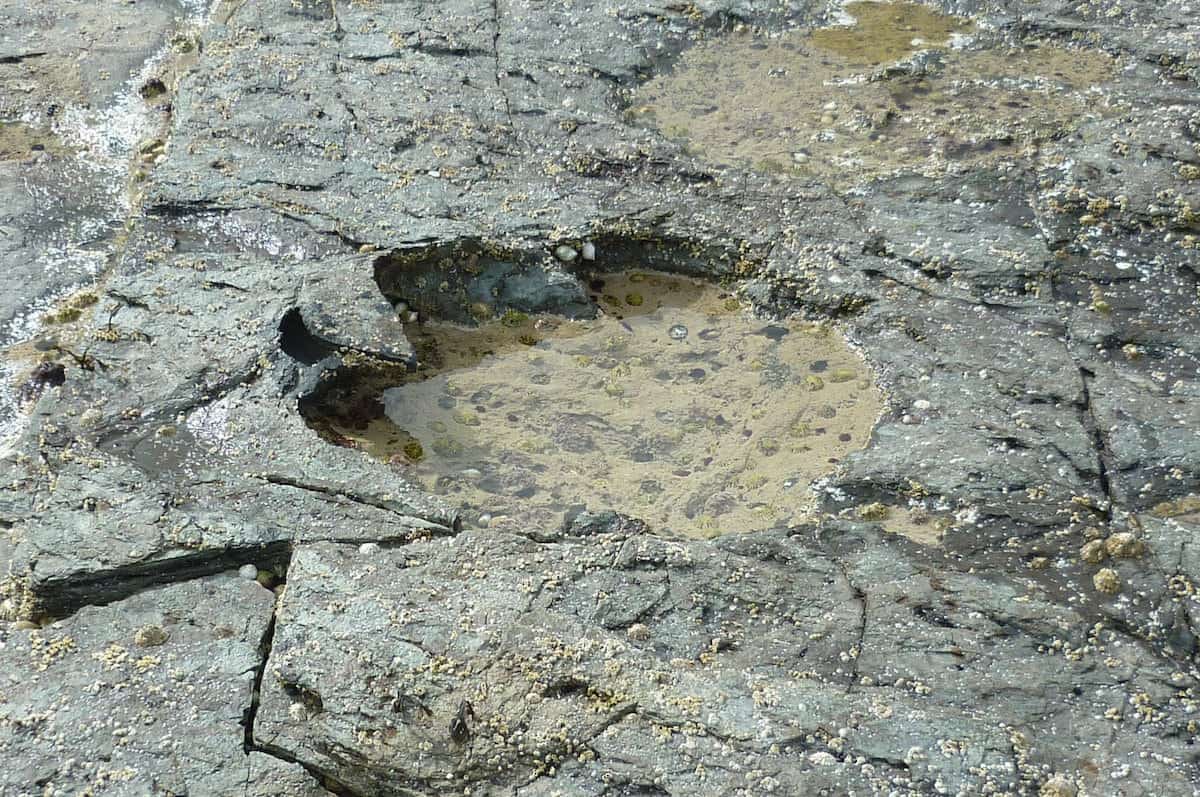 Dozens of footprints belonging to early sauropods – the largest animals ever to walk the planet – have been unearthed in a lagoon on the remote Scottish hideaway.

Others were made by the older theropod cousins of T Rex as herds splashed about in the muddy shallows off the north east coast.

They were identified by their claws. The discovery adds to evidence the prehistoric beasts were widespread on Skye at a vital time in their evolution.

It also suggests far from being strict land lubbers as once assumed they spent long spells in water. They didn’t swim but waded into the plant rich environments for food.

rs were taking over the world.

Dr Steve Brusatte, a geoscientist at Edinburgh University who led the field team, said: “We can tell they were made by sauropods – fairly primitive ones.

“But they would have been among the first species of truly colossal sauropods that lived on Earth.

“They were probably more than 15 metres (49ft) long and weighed more than 10 tons.

“It appears as if these tracks were made in shallow water – so the dinosaurs look like they were probably wading.

“The water may have been quite shallow – maybe only a few feet deep or even less.

“It’s hard to say exactly why these dinosaurs were in the lagoon – but we seem to be finding more and more footprints of lagoon-dwelling dinosaurs these days.

“Lagoons were probably their homes – at least part of the time. Maybe there was abundant food there – or maybe it was a safe place to hide from predators.

“The Skye dinosaurs lived about 170 million years ago. Back then Skye was part of a small island perched in the middle of the growing Atlantic Ocean.

“The Atlantic was much narrower because the supercontinent of Pangea had started to break up only about 30 million years earlier.

“So the continents were all much closer together. Dinosaurs were truly dominant at that time and lived all over the world.”

The impressions were left by long necked sauropod ancestors of Brontosaurus and sharp-toothed relatives of T Rex during an era ‘lost in time’.

They were up to 15 inches long – allowing researchers to estimate the hip height of the track makers.

Palaeontologist Paige dePolo, an Edinburgh University student who led the study as part of her degree, said: “This tracksite is the second discovery of sauropod footprints on Skye.

“It was found in rocks that were slightly older than those previously found at Duntulm on the island.

“It demonstrates the presence of sauropods in this part of the world through a longer timescale than previously known.

“This site is a useful building block for us to continue fleshing out a picture of what dinosaurs were like on Skye in the Middle Jurassic.”

Her researchers measured, photographed and analysed about 50 prints in a tidal area at Brothers’ Point (Rubha nam Brathairean).

This is a dramatic headland on Skye’s Trotternish peninsula – the location of the Old Man of Storr, one of Scotland’s most iconic geologic features.

In spite of tidal conditions, the impact of weathering and changes to the landscape they were able to identify two seperate tracks in addition to many isolated footprints.

A site map was made using photographs taken by drones with additional images obtained by paired cameras and software tailored to model the prints.

This enabled detailed analysis of the track outlines . The shape and orientation of the toes – and the presence of claws – identified them as those of sauropods and theropods.

The track sites described in the Scottish Journal of Geology were dug up by dinosaur prospectors two years ago.

Ms dePolo said: “Dinosaur fossils are very rare in rocks from the Middle Jurassic which is frustrating because this epoch was an important time in their evolution.

“This is when the first birds probably took to the skies, the earliest meat-eating tyrannosaurs and plate-backed stegosaurs diversified and long necked sauropods begin growing to colossal sizes.”

Sauropods ended up reaching 50 metres (164ft) in length and weighing as much as 77 tons – 14 times as heavy as an African elephants.

The necks of some made up much of their entire body lengths – up to 15 metres (49ft) in the aptly named Supersaurus.

Ms dePolo said: “The presence of sauropod tracks in this locality reinforces the growing number of observations – including in the slightly younger Duntulm Formation of Skye – that sauropod dinosaurs frequented the lagoons of Middle Jurassic Scotland.”

A similar discovery on Skye of over a hundred dinosaur footprints up to 2ft in length was reported three years ago.

The island is famous for its dramatic landscapes, some carved during the age of the dinosaurs. It was recently voted the most desirable place in Britain to live.