James Kelly of Scot Goes Pop described the “frustration” of the “sizeable minority of voters who don’t seem to see the very obvious connection between the shortages and the arguments for independence and for restoring freedom of movement”. 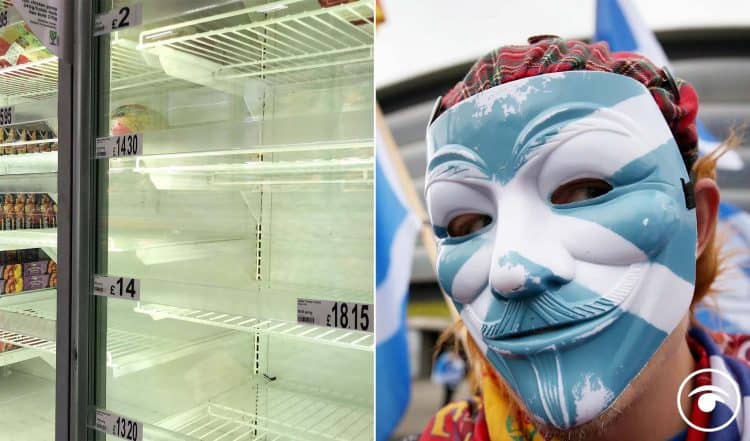 Food shortages caused by Brexit give boost to the case for Scottish independence, according to polls.

One third of those surveyed said seeing empty supermarket shelves and closed forecourts made them think Scotland would be better off independent.

Pollsters Panelbase quizzed 1,000 people in Scotland on whether shortages made them see the independence question differently.

Some 35 per cent said the situation strengthened the case “for Scotland to become an independent country and to then seek to restore freedom of movement with the countries of the European Union”.

The polling was commissioned by blog Scot Goes Pop, and also reveals further detail about how 2014 voters feel about the issue.

James Kelly of Scot Goes Pop described the “frustration” of the “sizeable minority of voters who don’t seem to see the very obvious connection between the shortages and the arguments for independence and for restoring freedom of movement”.

He questioned “whether the Scottish Government and other independence campaigners have been relentless enough in making the linkage between Brexit and the difficulties people are now facing from day to day”.

Most Yes voters felt the case has been strengthened, while the majority of No voters thought the opposite.

But among those who did not vote in the referendum, 34 per cent said supply chain problems had provided new impetus for an independent Scotland in the EU.

Only 16 per cent of that group opposed that.

Almost one third of people who voted Labour in the 2019 General Election also said the position was strengthened, as did 15 per cent of LibDem backers.

Among Conservative voters, the figure was only five per cent.

This is in contrast to an SNP voter figure of 61 per cent.

No other party affiliation was included.