A falconer has been cleared of breaching strict hunting laws because he hunts foxes -using a GOLDEN EAGLE. John Mease, 45, was found not guilty after a court heard he used the enormous bird of prey to catch animals – not a pack of dogs. He was further cleared of causing unnecessary cruelty to an […] 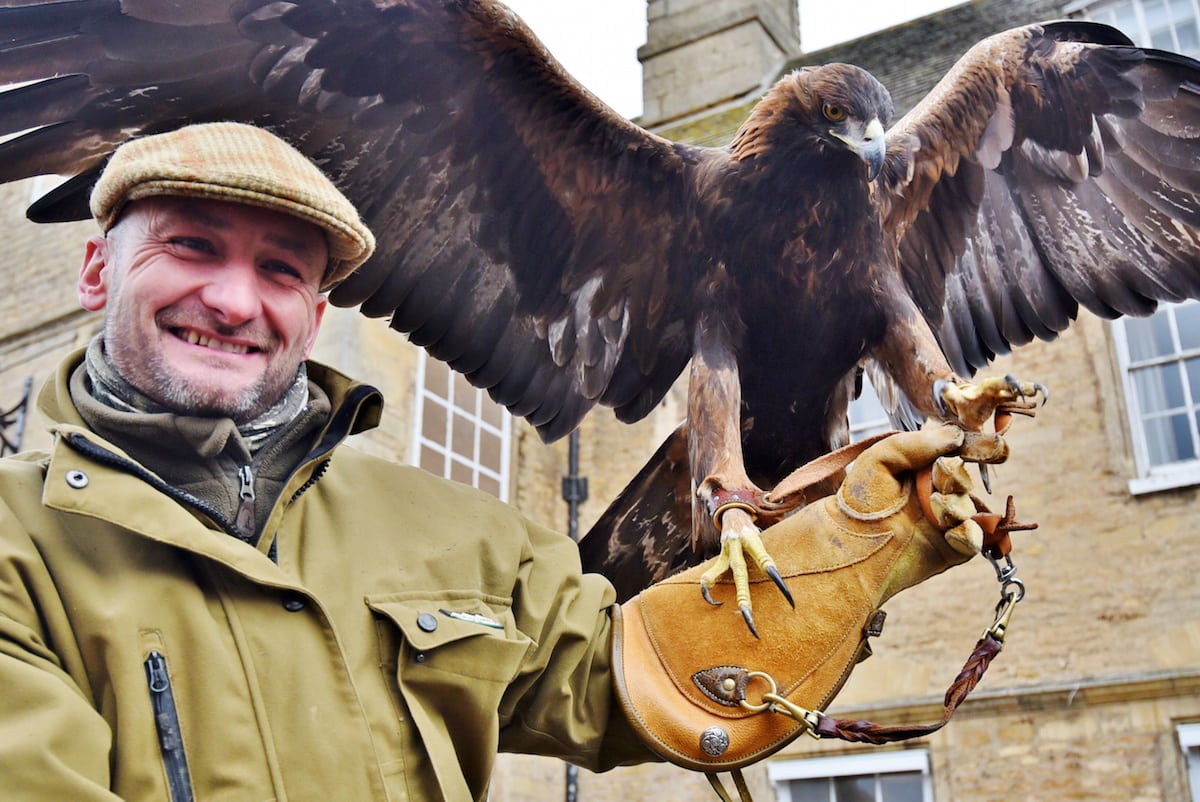 A falconer has been cleared of breaching strict hunting laws because he hunts foxes -using a GOLDEN EAGLE.

John Mease, 45, was found not guilty after a court heard he used the enormous bird of prey to catch animals – not a pack of dogs.

He was further cleared of causing unnecessary cruelty to an animal despite ‘dispatching’ another fox by driving a KNIFE through its eye after it was caught by his raptor in 2013.

Co-accused Fitzwilliam huntsman George Adams, 66, was convicted of using hounds to kill the fox on January 1 2016.

Hunting with foxes is banned – but the 2005 law permits dogs to “flush” out the fox so it can be caught by a bird of prey.

The prosecution during Adams’ and Mr Mease’s trial maintained the eagle was used as a “smokescreen” to allow the hunt to continue as it had before the ban.

Peterborough Magistrates Court was shown headcam footage from Mr Mease in November 2013, when he used the golden eagle to catch a fox.

Mr Mease – who joined the Fitzwilliam Hunt after hunting with dogs was made illegal – used a falconers knife to “dispatch” the fox by driving the spike through its eye.

The court heard the hunt’s hounds were used to flush the animal out into the open before the eagle was released to catch the fleeing mammal.

He would then ride up to the bird and the prey on a quad-bike and then make sure the fox was killed humanely.

The court heard it took him 47 seconds to kill the fox from the moment it was caught by the eagle.

He said while it would have been better to have killed the fox quicker he said: “No-one else could have done it quicker.”

Mr Mease denied hunting for sport and added: “Not at all. I am employed as a pest controller.

“I respect all animals. I don’t get pleasure in dispatching a fox. There is no nice death. This is just how it is.”

Mr Mease and Adams were also accused of using hounds to kill the fox on January 1 2016.

Video footage by hunt sab Stephen Milton played to the court showed the 40-hound hunt in field near Wansford, Cambs., and a hunting horn could be heard.

The court heard the hounds got scent of the fox and Mr Milton said he didn’t hear anyone from the hunt calling the dogs off the fox.

Video footage taken from Mr Mease’s headcam showed him saying the fox would have escaped had hunt sabs not blocked its escape route – something they denied in court.

The fox was killed by the pack of hounds and Mr Mease’s golden eagle was not released – and he did not tell Adams to call off the hunt, the court heard.

Adams, who joined the Fitzwilliam Hunt in 1981 and became a huntsman in 1984, told the court he had not seen the fox before it was killed.

When asked if it was his intention to kill the fox with hounds, he said: “Absolutely not. We wanted to flush it out for the bird of prey.”

Mr Mease told the court there was no chance for him to release his golden eagle because the saboteurs were in the field.

Asked why he didn’t radio Adams to call the hunt off, he said: “A hunt is a fluid thing. It was changing minute by minute.

“It was the heat of the moment and it was the first time I had come across saboteurs in my 11 years.”

He told the court he was in charge of the bird – but had no control over the pack of hounds, which was Adams’ responsibility.

District Judge John Woollard said he had heard no evidence the hunt had made any changes to their activities – other than using the falconer – since the hunting act was brought in in 2005.

Joe Bird, prosecuting, labelled Mr Mease and his eagle a ‘smokescreen’ used by the hunt to allow it to continue as it had before the ban.

He said: “The set up was never going to work. It was a smokescreen.

“There were so many occasions when they would not have been able to fly the eagle.”

Stephen Welford, defending both men, said: “There is video footage of Mease using his eagle to kill a fox. That would not exist if it was a smokescreen.”

Both men denied the charges and, following a two-day trial, Adams was convicted of using hounds to kill a fox on January 1, 2016.

Mr Mease was found not guilty of the charge, and also not guilty of causing unnecessary cruelty to an animal relating to hunting of a fox in 2013.

Judge Woollard said it was clear he had no control over the hounds during the hunt.

Speaking after the trial, Hunt Saboteurs Association spokesperson Lee Moon said: “To anyone who witnessed the events on the day in question it was abundantly clear that a wild mammal was hunted and killed illegally, in a most gruesome manner.

“Although a fox had to suffer and die due to the blatant and remorseless actions of the defendants we are pleased that hunt saboteurs were able to bring at least one of them to justice.

“We would like to thank Cambridgeshire police who conducted a robust and unbiased investigation.

“The loopholes and exemptions in the current act have always been cynically exploited by hunts in order to operate much as they would have done prior to the ban.

“The guilty verdict proves that hunting with a full pack of hounds is not the same as Falconry and the judge in summing up confirmed as much.

“The outcome will of course have wider reaching implications for all those hunts around the country who claim to use this exemption.

“We will continue to vigorously oppose those who gain enjoyment from the torture and killing of our wildlife and will use all the tools at our disposal to those ends.

“We have the overwhelming support of the general public who wish to see an end to the barbaric minority pastime.”

Speaking following the verdict, Adrian Simpson, from the Countryside Alliance, said they believed the judge had made the wrong decision, and Adams was planning to appeal against the verdict.