Extremism is increasing significantly in the UK – from the right-wing groups who claim to be fighting it. Suspected Right-wing extremists now make up a quarter of people referred to the Government’s flagship counter-radicalisation programme, the terror watchdog has revealed. David Anderson, QC, said the large numbers being identified as far-Right sympathisers illustrated the scale […] 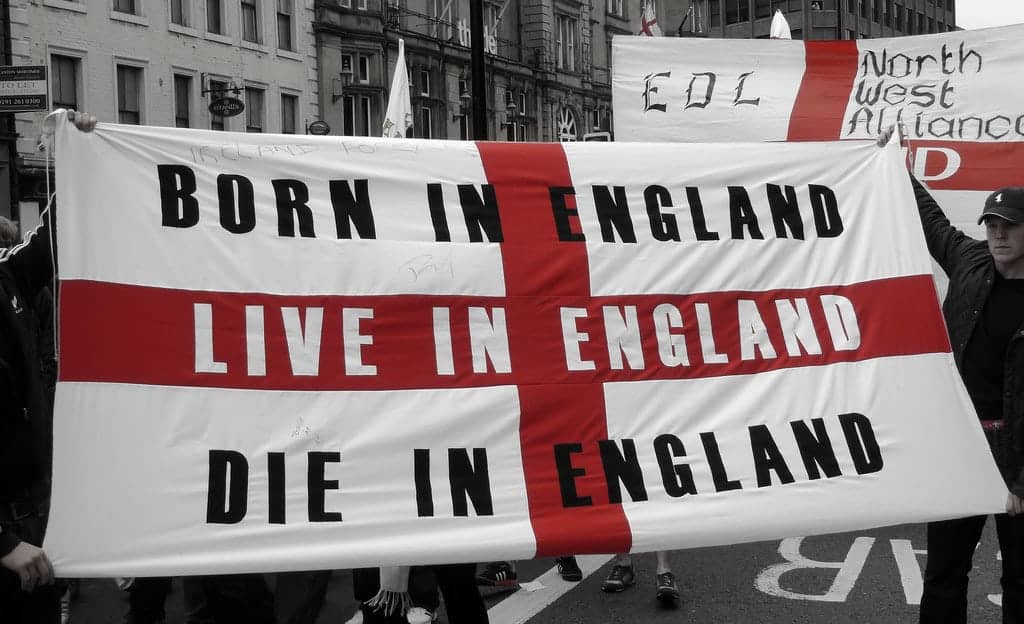 Extremism is increasing significantly in the UK – from the right-wing groups who claim to be fighting it.

Suspected Right-wing extremists now make up a quarter of people referred to the Government’s flagship counter-radicalisation programme, the terror watchdog has revealed.

David Anderson, QC, said the large numbers being identified as far-Right sympathisers illustrated the scale of the sector’s growing danger to Britain, saying the extremists are increasingly feeding off the tension caused by Islamist terror to plan violence of their own.

Makes sense. The English Defence League website marks as their primary introduction that they have “risen from the English working class to act, lead and inspire in the struggle against global Islamification”.

“The EDL was founded in the wake of the shocking actions of Muslim extremists who, at a regimental homecoming parade in Luton, openly mocked the sacrifices of our service personnel.

“Time has shown that the views of that minority on that day are increasingly widely shared by other Muslims.

“What’s more, time has also shown that the antipathy displayed by those Luton extremists is reflected in other expressions of Islam-inspired intolerance up and down and across Britain.”

But right-wing fights against extremism has turned into sympathy for their methods. A sharp rise of anti-Semitic attacks have been reported in London — including a brick covered in swastikas thrown through the window of a Jewish family’s home — and similarly unpleasant Islamophobic incidents.

There was also a rise in hate crime following the Brexit vote.

“Increasingly, Right-wing extremists such as Thomas Mair, the killer of Jo Cox MP, feed off the tension [caused by Islamist extremism] to plan violence of their own.

“The threat from extreme Right-wing terrorism in the UK is currently fragmented but the massacre perpetrated by Anders Breivik in Norway is a warning against underestimating the threat.

“Both the Government and the courts treat the threat with the seriousness it deserves. Extreme Right-wing ideology can be just as mur- derous as its Islamist equivalent. A sophisticated network is not a prerequisite for mass slaughter.”