The right wing paper named three sources in the piece. They were two of them! 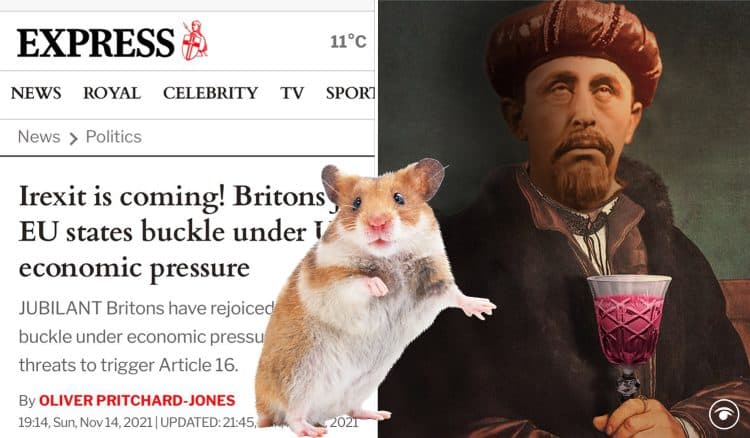 Attempts by The Express to undermine the European Union reached new lows this weekend after it turned to ‘Pished Artist’ and ‘Ruffles The Guinea Pig’ to add weight to a story about ‘Irexit’.

Talks between London and Brussels over the contentious Northern Ireland protocol remain deadlocked coming into a crucial period, and there is speculation that the UK is poised to trigger Article 16 in the coming weeks.

The UK Government has set a December deadline for a resolution in talks on the protocol.

But Prime Minister Boris Johnson and Brexit negotiator Lord Frost have argued the EU’s interpretation of the deal has led to difficulties.

The EU has already warned that there will be consequences should the clause be triggered – sparking fears about a trade war.

According to Oliver Pritchard-Jones, Express.co.uk readers were “quick to jump on this – gleefully reminding them of the potential cost of any trade war.”

One reader (who goes by the moniker of Russels The Guinie Pig) said: “The EU knows Ireland can’t afford to build and man a 500-mile border.

“Ireland is going to be suspended from the common market and the customs union.

“That essentially means Ireland will be out of the EU. Irexit is coming, and there won’t be a referendum or any negotiations.

Another reader (Pished.Artist) said: “The UK has put no financial pressure on the EU.

“They have done it to themselves, no one trusts a liar, and the EU is full of them.”

Irish Fine Gael politician Neale Richmond pointed out the bizarre use of sources in a tweet sent out yesterday, with this reaction really stealing the show: