As Boris Johnson went AWOL on the day he would have had to vote against the Government or with them against his principles on a new Heathrow runway, the Foreign Secretary was ridiculed by all sides. Fellow anti-Heathrow expansion campaigner and international trade minister, Greg Hands could easily have avoided tonight’s vote with a foreign […]

As Boris Johnson went AWOL on the day he would have had to vote against the Government or with them against his principles on a new Heathrow runway, the Foreign Secretary was ridiculed by all sides.

Fellow anti-Heathrow expansion campaigner and international trade minister, Greg Hands could easily have avoided tonight’s vote with a foreign trip, but instead took ministerial responsibility seriously and resigned on principle on Friday.

Despite the junior minister having thrown the gauntlet down to his Conservative colleague, Johnson opted to fly to Afghanistan and dodge the vote his colleagues were forced to vote for. 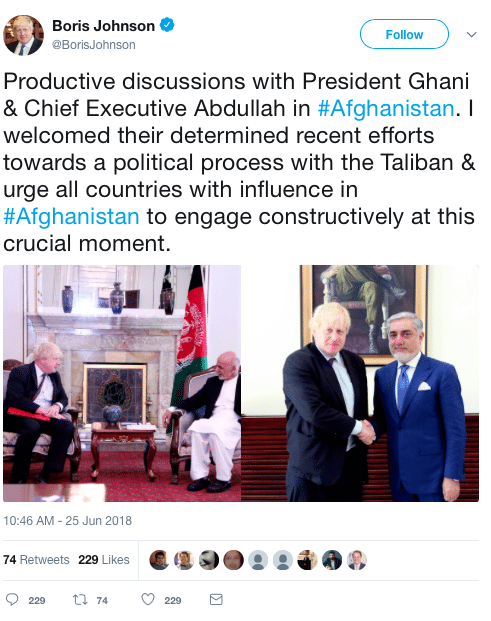 Greg Hands had explained that he would have to resign now Theresa May’s whips were insisting Tory MPs vote for Heathrow expansion, which the Labour leader says fails environmental and economic tests.

But as even prominent Conservatives today called out Boris Johnson’s cynicism, Theresa May’s own flipflop on the heated debate emerged. Her wesbite had deleted previous promises to stop Heathrow’s “flawed” expansion.

While Boris Johnson had promised his constituents back in 2015 when he became an MP that he would he would “lie down in front of those bulldozers” to stop the expansion, a now deleted vow on Theresa May’s website made a similar commitment to her constituents.

“Theresa is firmly against plans to build a third runway at Heathrow Airport and is campaigning against it on behalf of Maidenhead residents,” said the deleted statement that journalist Adam Bienkov unearthed. 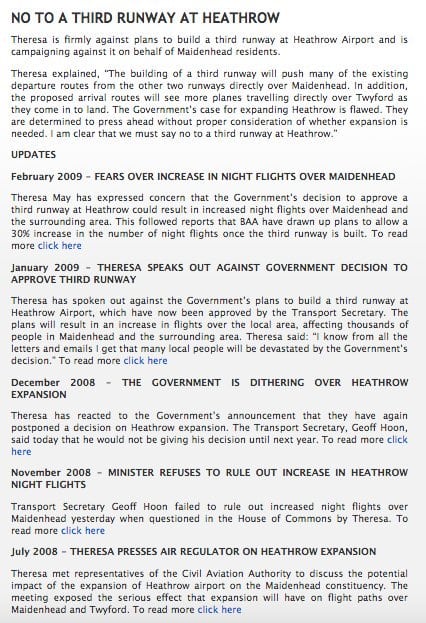 “The Government’s case for expanding Heathrow is flawed” Theresa May had insisted in words she must now regret. “I am clear that we must say no to a third runway at Heathrow.”

But by 2017 Heathrow expansion was a manifesto commitment in May’s Conservative Party election manifesto.

Despite accusations of hypocrisy from her constituents, environmental campaigners and the opposition, Theresa May made the third runway vote a three-line Whip. 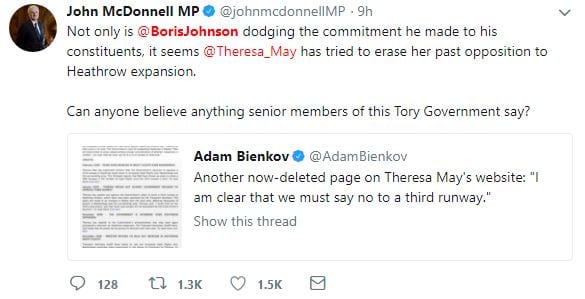 She could have won tonight with a free vote, but clearly the Prime Minister was intent on humiliating Boris Johnson who is increasingly attacking her and her approach to Brexit negotiations in public.

Fortunately for Theresa May, her hypocrisy has escaped largely unreported, and the Foreign Secretary drew most of the fire for running away from the runway vote to take a sudden interest in Afghanistan.

There had been rumours that Boris Johnson would attend a meeting of foreign ministers in Luxembourg to dodge the vote, hut his deputy Alan Johnson travelled to the meeting and promised to be back for the vote, insisting in a veiled dig at the Foreign Secretary that: “I was always down to go to this council. I’m not standing in for Boris. I will be back at six-ish and I will vote for the expansion of Heathrow.”

Instead Boris Johnson appeared to suddenly need a rare trip further afield to Afghanistan to avoid facing up to his promises. 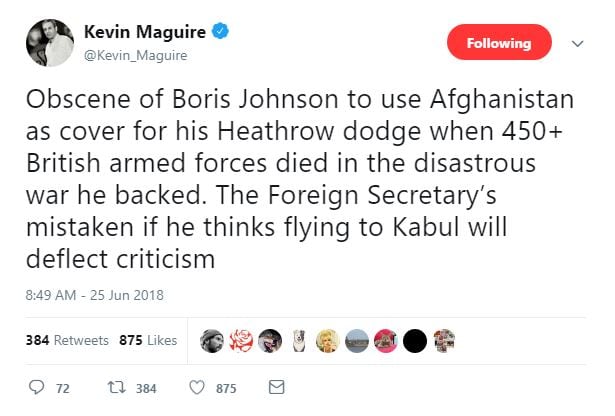 But nobody failed to see through his sudden trip to Afghanistan. Johnson faced ridicule and contempt from all sides. His Tory colleague MP Sarah Wollaston said that BoJo’s actions today “won’t wash” and called on him to make a “principled decision” to stand down.

Former Conservative whip Stephen Crabb told Radio 4’s Westminster Hour that Mr Johnson would “need to look his constituents in the eye and explain where he was on the night of the Heathrow vote”.

Shadow foreign secretary Emily Thornberry said: “Boris Johnson likes to call other politicians invertebrate jellies, yet his decision to flee the country rather than make good his previous promises on Heathrow shows him to be the most spineless of all. On this issue, he has proven himself utterly devoid of courage, strength, or principle. Never again should he dare to call Winston Churchill his role model.”

Boris Johnson had attempted to placate local councillors in his constituency writing to them with the following excuse:

“I have made clear my opposition since joining the Government, and I will continue to lobby colleagues from within government.  Some of my critics have suggested that I should resign over the issue. No doubt they have my best interests at heart.

“But it is clear from what is likely to be a large majority of MPs who are in favour of a third runway that my resignation would have achieved absolutely nothing.” 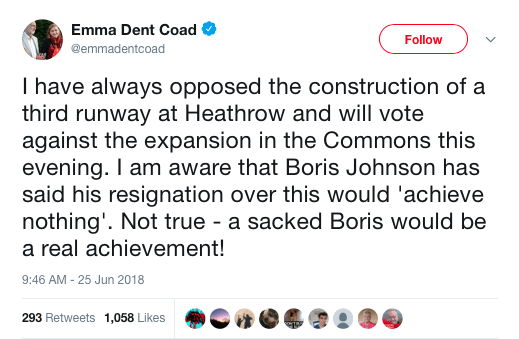 Eight Conservatives voted against the government, but with Jeremy Corbyn allowing Labour MPs a free vote and the SNP abstaining, Theresa May had her way in the Commons.

Boris Johnson speaking after his election: "I will lie down with you in front of those bulldozers and stop the construction of that third runway." pic.twitter.com/6Pzvjfwehf