Today, on Clear Air Day, the Chelsea and Fulham MP Greg Hands who has always told his constituents he would oppose athird runway at Heathrow announced that he was forced to resign as Theresa May is insisting on bringing out the whips to get the majority she needs in a vote on the airport’s expansion […]

Today, on Clear Air Day, the Chelsea and Fulham MP Greg Hands who has always told his constituents he would oppose athird runway at Heathrow announced that he was forced to resign as Theresa May is insisting on bringing out the whips to get the majority she needs in a vote on the airport’s expansion on Monday.

The Foreign Secretary has also always expressed his very vocal opposition to a third runway at Heathrow. But he remains tight-lipped on whether he will resign on principle too or take the easy way out and dodge Monday’s vote by heading abroad.

His Chelsea and Fulham colleague today explained he was resigning to honour a pledge to oppose Heathrow expansion after it was confirmed Tory MPs would not be allowed a free vote. As an international trade minister, Greg Hands could easily have avoided Monday’s vote with a foreign trip, so if Johnson uses this as an excuse it will be yet another stain on his tarnished political reputation for putting career over country.

“I wrote to the PM earlier this week on how I will honour these 2017 General Election pledges to the people of Chelsea & Fulham and vote against the Heathrow 3rd runway on Monday,” tweeted Greg Hands with snapshots of his election promises.

On one of the leaflets it says how Hands has been an “active campaigner against Heathrow expansion, and like Boris Johnson, is opposed to the recent decision to go ahead with the Third Runway.” 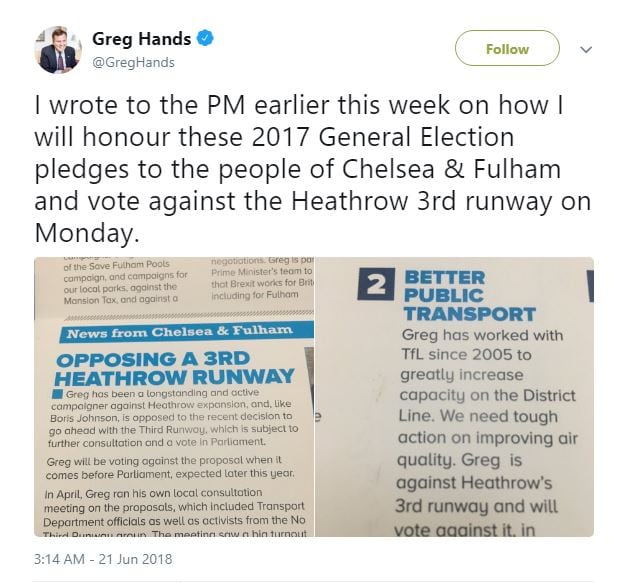 But if Hands was throwing down the gauntlet to his Conservative colleague, Boris Johnson was keeping shtum about his whereabouts on Monday’s whipped vote.

Many suspect Boris Johnson will dodge the bullet by jetting off to a meeting of European Union foreign ministers instead.

– Even though a recent ministerial statement announced that Foreign Office minister Sir Alan Duncan will be representing the UK and the Foreign Office has not confirmed if Johnson would be going too.

“If Boris Johnson has a backbone, or a shred of credibility left, he will join Greg Hands in resigning,” tweeted the Green Party’s Caroline Lucas.

Labour’s shadow transport secretary Andy McDonald said: “Greg Hands’ resignation piles the pressure on Boris Johnson who promised his constituents he would ‘lie down in front of the bulldozers’ to stop a third runway.

“Instead he is jetting off to Luxembourg on Monday to avoid the vote because he is too weak to stand by his promises.

“Labour opposes a third runway at Heathrow because it doesn’t meet our four tests and we are calling for a free vote for all parties on Monday.”

When he was elected as MP for Uxbridge, also under the Heathrow flightpath, Johnson vowed to fight for his constituents’ air quality too, branding a third Heathrow runway a “disaster” for the environment.

Boris Johnson vowed to do all in his power in government to fight any expansion, saying it was “barbarically contemptuous of the rights of the population” putting their health at risk.

When he was elected as MP for Uxbridge, also under the Heathrow flightpath, Johnson vowed to fight for his constituents’ air quality too, branding a third Heathrow runway a “disaster” for the environment.

Boris Johnson vowed to do all in his power in government to fight any expansion, saying it was “barbarically contemptuous of the rights of the population” putting their health at risk.

Last month the Foreign Secretary threatened to resign, disloyally pouring scorn on Theresa May’s compromises with her Tory MPs on what customs arrangements to offer the EU in negotiations.

But as Westminster circles are so used to Johnson attacking the Prime Minister, nobody paid much attention to his threats to resign.

Phillip Lee resigned as a Justice minister last week ago to vote against his government, complaining Tory MPs were being forced into “positions of being blindly supportive” of the Brexit “process.”

He warned this week that Tory whips were using “dark arts” to force through controversial Brexit legislation that would deny parliament a say on whether the government should go back to the negotiation table if they were about to drag Britain out of the EU’s trading arrangements without a deal with their European counterparts.

Hands is the sixth ministerial resignation since Theresa May formed a weakened majority with the DUP after the snap general election she called last summer for a stronger mandate for her Brexit negotiations backfired spectacularly.

A week later Priti Patel was forced to resign as International Development Secretary after she breached ministerial protocol with Israeli visits that she was accused of carrying out without informing Downing Street or the Foreign Office.  She had recommended that her department give British foreign aid to hospitals for Syrians run by the Israeli army. A senior colleague told the Telegraph that Priti Patel “saw the Israeli Prime Minister with a donor lobbyist, and failed to declare or admit to the meetings. She commissioned policy work as a result. It is a total breach of the code. She’s toast.”

And in April Amber Rudd resigned as Home Secretary as details of the Windrush Scandal emerged and she was forced to admit that she had “inadvertently misled” the Home Affairs Committee when she said she was not aware of her department’s removal targets. Emails between Rudd and Theresa May about the targets were revealed and many speculated that her resignation helped shield May from the consequences of immigration policies enacted when she herself was responsible as Home Secretary.