“For many they may mean lost job opportunities, missing out on rental properties, being refused loans/or mortgages,” EU citizens campaign group In Limbo said. 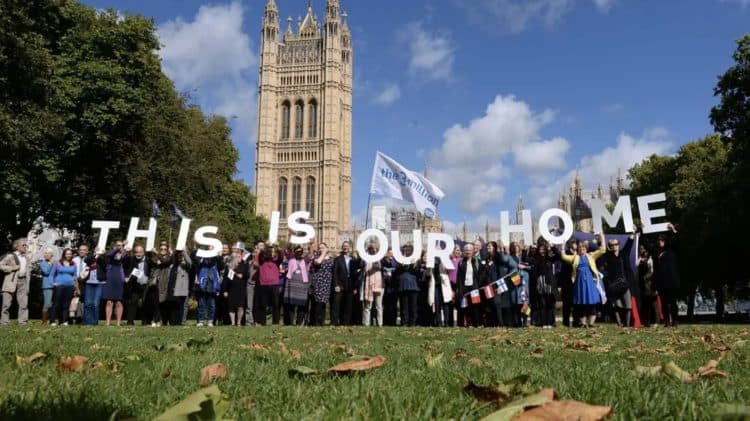 This year has already seen the highest rate of rejections of EU citizens applying to keep their rights in the UK after Brexit, it has emerged.

The EU Settlement Scheme figures for January 2022 revealed the highest percentage of refused, withdrawn or invalid applications in three years since the scheme was launched, at 34 per cent.

According to the3million, a group campaigning for EU citizens’ rights in the Britain after Brexit, January saw a continuation of a low application processing rate.

“The backlog of 315,000 applications will take 24 months to clear at this rate,” the group said in a series of tweets.

It added: “Only 69,000 applications were concluded in Jan 2022, still leaving 315,000 in the backlog facing insecurity, worries and threats to their ability to work, rent and live in the UK.

“This backlog doesn’t include Family Permit applications. We are also seeing reports of family members of EU citizens facing awful consequences because they are waiting for months on end for decisions. The most vulnerable are the most affected – for example seriously ill parents.”

In Limbo, a prominent group campaigning for EU citizens rights in post-Brexit Britain, said the figures are “very worrying”.

“For many they may mean lost job opportunities, missing out on rental properties, being refused loans/or mortgages,” the group said, adding: “A soul destroying state of affairs for those whose applications are caught up in the backlog.”

Bremain in Spain, a group campaigning for UK citizens rights in the EU, added: “This is truly worrying. Our fellow EU migrants living in the UK deserve so much better.”

Former civil servant Richard Haviland suggested the government’ scheme for EU citizens “told a story of lives turned upside down, of constant stress, even of high levels of homelessness” and highlighted the picture “hasn’t improved” based on the new data.

And EU rights campaigner Monique Hawkins said the infographic presented by the3million is at risk of being normalised.

“Just LOOK at the gap between applications left to process, and the tiny bit of excess capacity being allocated to eat away at the backlog each month. This represents hundreds of thousands of people STUCK,” she said.

Over half of EU citizens’ calls to Home Office helpline unanswered

Last month, it emerged that the Home Office did not answer more than half the phone calls made by EU citizens seeking to preserve their post-Brexit rights.

The department’s own data revealed just 44 per cent of calls got through between November 2020 and 2021, pro-EU website Free Movement said.

During this period, over 1.4 million calls were made in an attempt to address problems and clear confusion related to the EU Settlement Scheme (EUSS) – but just around 650,000 were connected, a Freedom of Information request revealed.