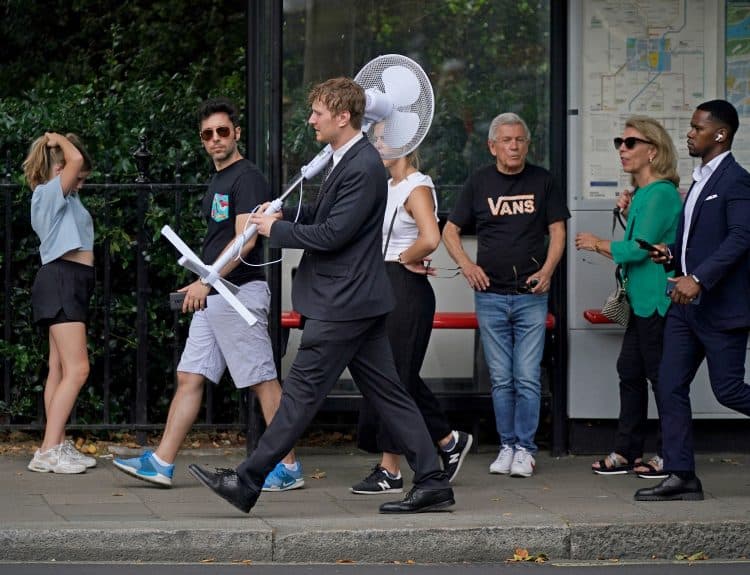 Ministers will hold an emergency Cobra meeting on Saturday after meteorologists warned of record high temperatures in England that could put lives at risk.

Cabinet Office minister Kit Malthouse is to chair a meeting of the Government’s Cobra civil contingencies committee to discuss the escalating heatwave, a Government spokesman said.

It will be the second Cobra meeting Mr Malthouse has led on the issue.

Meteorologists have given an 80% chance of the mercury topping the UK’s record temperature of 38.7C set in Cambridge in 2019, with the current heatwave set to peak on Tuesday.

However, over on GB News the concern about the heat was not met with the same concern.

Hammond said: “I think there’ll be hundreds, if not thousands of excess deaths early next weeks. The charts I can see in front of me are frightening, so we all like nice weather, but this will not be nice weather – this will be potentially lethal weather, for a couple of days.”

But Bev didn’t want to hear Hammond’s doom and gloom.

She said: “I want us to be happy about the weather. I don’t know whether something’s happened to meteorologists to make you all a little bit fatalistic and harbingers of doom.

Hammond shot back: “No, and we are seeing more and more records more and more frequently and more and more severely … Heatwaves are becoming more extreme, this is yet another one which is coming down the tracks towards us.

“I don’t think we should be too light-hearted about the fact that many are going to die over the next week because of the heat. 40 degrees, this sort of temperature in this country, I’m afraid, is not geared up to cope with.”