"This is SO good," wrote Stewart Reynolds after watching the parody video, which could end up being essential viewing for future Tory candidates! 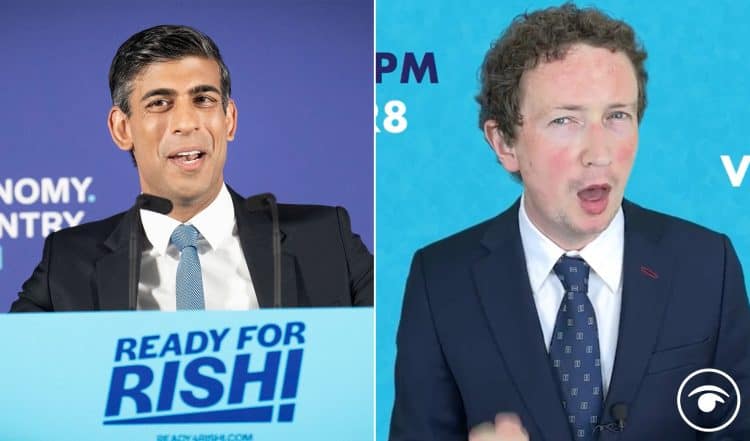 Here are some of the quotes from last night’s first round of debates to become PM.

But a satirical video of how Tories launch their leadership bids is amazing, but first here are some of the lines from the televised debate.

“We are all responsible for our own campaigns and I take it as a big fat compliment that no-one wants to run against me.” – Penny Mordaunt, asked about attacks on her.

“I’m running an entirely positive campaign which is about the great challenges we face and what we need to do to deliver for the people of Britain because we are facing a cost-of-living crisis, families are struggling.” – Liz Truss, asked if she “had the dogs out” to attack Penny Mordaunt.

“No.” – Tom Tugendhat, answering the question of whether Boris Johnson is an honest man.

“You’ve also given me two children.” – Tom Tugendhat responds to a question on the NHS from a woman in the audience, before hastily adding: “Not you personally, of course.”

“Why should the public trust us? We haven’t exactly covered ourselves in glory and it has, on occasion, looked like we were doing this for ourselves.” – Kemi Badenoch.

“Energy is a subject that worries me a lot, I grew up in Nigeria where there were blackouts every single day, there still are. I know what it’s like not to be able to turn on the light, so it terrifies me seeing how high bills are going.” – Kemi Badenoch.

“Our country can still be so much better. Better for those working hard to make ends meet like I did on minimum wage, flipping burgers at McDonald’s all those years ago.” – Kemi Badenoch.

“I don’t think the responsible thing to do right now is launch into some unfunded spree of borrowing and more debt, that will just make inflation worse, it will make the problem longer.” – Rishi Sunak.

“I have two young girls and they’re not massively bothered about my job (but) the one thing they ask me about is the environment.” – Rishi Sunak.

“Borrowing your way out of inflation isn’t a plan, it’s a fairytale.” – Rishi Sunak to Liz Truss.

“I think it is wrong to put taxes up.” – Liz Truss responds.

“I support the extra money, I just don’t support the way we funded it. I support spreading the Covid debt over a longer period of time.” – Liz Truss on Rishi Sunak’s national insurance increase.

Comedian Matt Green has created a new video and this one concerns ‘every Tory leadership launch!’

Watch it then return to the current contenders’ real ones and see how he nails it!

If you like his work then you can support him here.

Related: Watch: Spoof telephone caller blames Corbyn for rail strikes and everything else