William Darling, 14, decided to undertake the challenge after discovering 65 bits of rubbish in less than an one-mile stretch of the Norfolk Broads 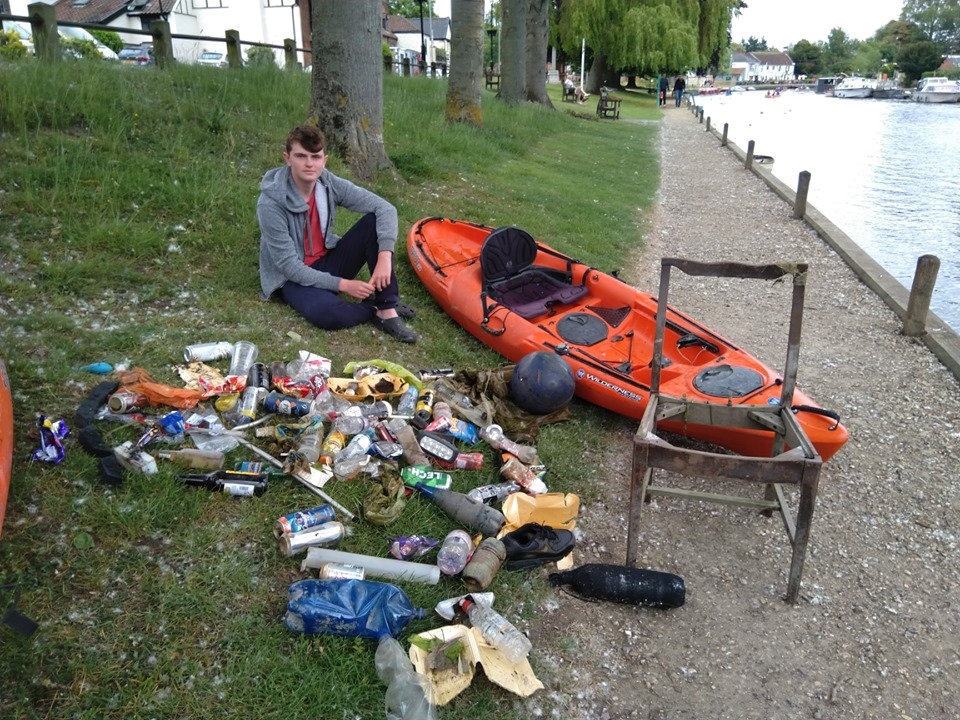 A teenage kayaker has clocked up more than 100 MILES clearing rubbish including a toilet from rivers and waterways.

William Darling, 14, decided to undertake the challenge after discovering 65 bits of rubbish in less than an one-mile stretch of the Norfolk Broads.

The young lad has been clearing the waterways since last year in a bid to reverse “this worrying trend” of rubbish being dumped in Britain’s water systems.

William said he mostly comes across plastic bottles and wrappers including a sweet packed dating back to 2005.

He said: “The weirdest thing I have found is a portable toilet floating along the river

“I thought that it would be a good idea to act sooner rather than later to reverse this worrying trend.

“I have kayaked over 100-mile of river, picking up rubbish and plastic.

“I have picked up numerous trailer-fulls of rubbish.

“The impact of this problem is that it can affect the beautiful natural wildlife and their habitats along with visitors’ perception and enjoyment of the locals.”

William said that picking litter from his kayak is the most effective way to help collect rubbish.

The student, from Wroxham, in Norfolk said: “The majority of rubbish is trapped in reeds, under over-hanging trees or in dense bushes- picking it up from my kayak is a lot easier and safer.”

William said: “I went out onto Wroxham Broad recently and discovered within approximately 200 yards of the banks.

“I found six plastic bottles, four buckets, one fender, one tin can, one item of fishing tackle, one boat hook, one car tyre and nine other various plastic items.

“I then decided to carry out a check of the main river between the two entrances to Wroxham Broad and there I discovered a further 22 plastic bottles, three glass bottles, one paint can, one tin can, two supermarket carrier bags full of waste, one item of fishing tackle, a McDonalds balloon and a further 11 items of plastic waste.”

As well as improving Britain’s waterways, he has raised more than £5,000 for a trip to Tanzania in Africa where he will be taking part in a volunteering project this summer.

William is taking the opportunity to be part of an expedition to Tanzania, where part of his time will be spent clearing the beaches there of plastic.

William added: “I’ll continue to kayak and litter pick on weekends and evenings until the job is done.”

Catchment and Coastal strategy manager at Anglian Water, Lu Gilfoyle, said: “It’s fantastic to see William taking personal responsibility for where he lives and we’re proud to support him in this impressive challenge.

“We set up our RiverCare and BeachCare programmes to encourage volunteer led clean-up activity right across our region with the aim of protecting and enhancing our rivers and oceans.

“It’s hard work and never-ending so individuals like William should be celebrated. We are particularly pleased to see how much plastic this initiative has removed.”

William said: “The support I’ve had with funding has been great, it’s definitely kept me going every day and I’ve now covered over 100 miles of river in my kayak and the broads are looking a lot smarter.”

Microplastics found in water, food and air the equivalent of eating a “credit card a week” – click here