Jason Alexander packs up boxes of around 1,000 butts and ships them off to companies in the UK with the hashtag 'Have your butts back'. 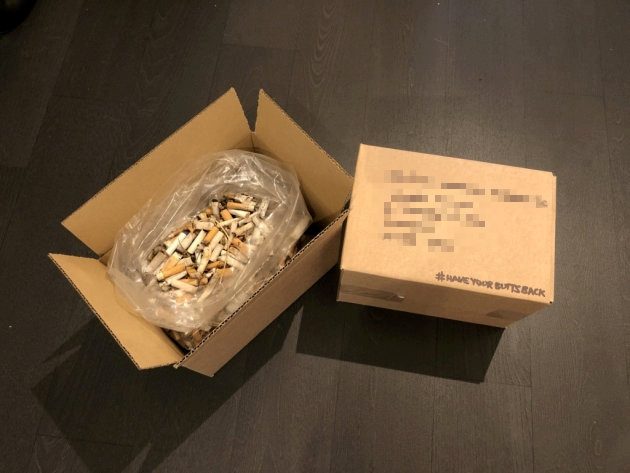 Green-minded Jason Alexander is waging a one man war against fag butts – by posting thousands of them back to the tobacco firms which made them.

Jason, aged 48, has collected a staggering half a million butts this year from his home town and on beach walks.

He has already sent off his first box of 1,000 butts to cigarette giant British and American Tobacco with the message; ‘Have your butts back’.

The former product designer from Ipswich, Suffolk, explained: “I started doing regular beach cleans and ended up doing a beach clean marathon so over a week I walked along the entire length of the Suffolk coast picking up litter.

“As I was going along, I noticed there was a lot of cigarette butts that I couldn’t pick up at the time because I was on a time limit. If I started picking them up I’d still be there.

“When I finished I just knew that this was such a big issue and wanted to do something about it.”

It was then that he came up with the idea to send back the cigarette butts to the producers in a bid to get them to recycle them.

With his social enterprise company Rubbish Walks CIC, Jason is hoping to collect a million cigarette butts in a new campaign.

And to make producers responsible, he sent his first box of cigarette butts to British and American Tobacco- and plans to deliver them to other companies in the UK.

He added; “It’s extremely difficult to divide the cigarettes into particular brands.

“It can be quite difficult to get tobacco companies to deal with the issue and discuss it with us. We wanted to make the producers responsible, to put the obligation on them.

“We want them to take part in a conversation with us and take an active role in helping to recycle the butts.

“We want the tobacco companies to say that they recognise this is an issue and are trying to do something. But helping local groups won’t make as much as a difference as we would like, we need a national strategy to tackle the problem if we are going to be effective.”

After carrying out some extensive research, Jason discovered the huge scale of the problem.

Jason, who has never smoked, said: “Six million cigarettes are smoked every hour of every day and that’s just in the UK. It’s quite scary.

“Most people do not think cigarette butts are litter, they don’t realise they contain plastic, they don’t know it’s the most common form of litter on the planet.

“In the media, people talk about single use plastic, and straws and plastic bottles which is all vitally important to address but the most common form of single use plastic on the planet is cigarette butts. We need to make sure that issue isn’t forgotten about.”

Jason also discovered that there is no longer a free option for people in the UK to recycle their cigarette butts.

He worked out it would cost more than £12,000 to recycle the ones he had collected so far, which he described as “ridiculous.”

To help him on his mission to bid the planet of butts, Jason ran an event called ‘Blitz The Butt’ where people came together to pick up butts- and collected 100,000 during the first event.

Jason is already working on the ‘world’s first charity cigarette bin’ and a tin for people to put their butts in if they find themselves without a bin.

But Jason said he doesn’t have an issue with people smoking- just those who decide to flick their butts on the ground.

He added: “I’m not going to say whether people should smoke or not that has got nothing to do with what I’m trying to do.

“Everyone has a right to choose whether they want to smoke, it’s perfectly legal, everybody has a choice there’s lots of information out there on the effects of smoking on your health.

“It’s not a choice however to flick your butts on the ground, it is illegal and there are laws against littering.”

A British American Tobacco spokesperson said: “It is important that smokers dispose of cigarette butts in a responsible way.”