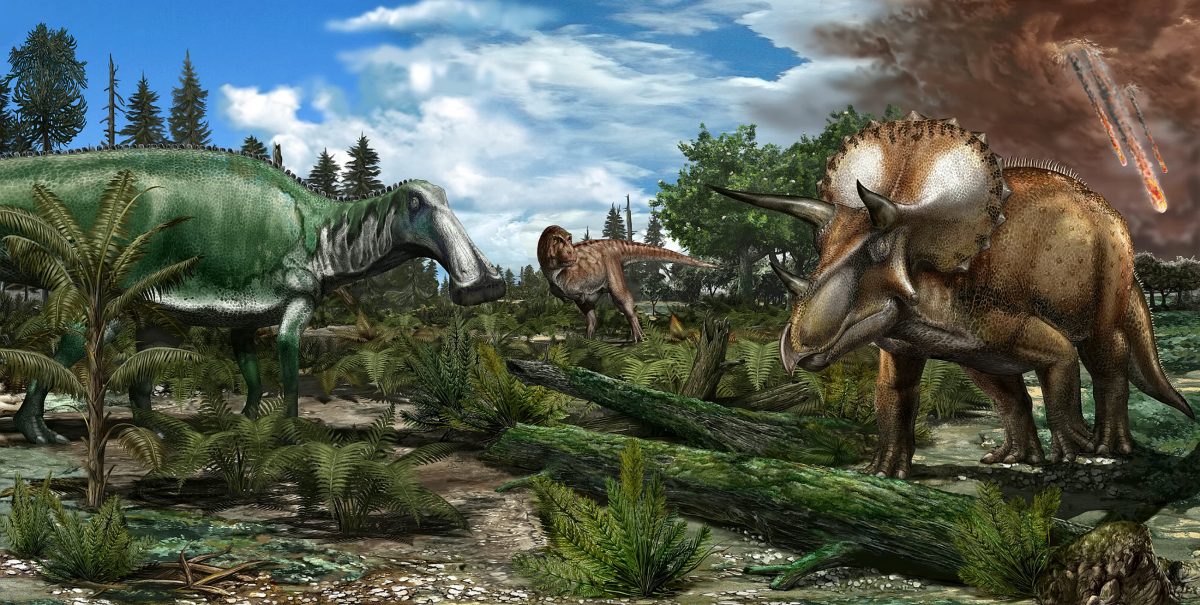 Dinosaurs were thriving before the deadly asteroid strike that wiped them out 66 million years ago, according to a new study.

For decades scientists have believed dinosaurs were already in decline because of changes in the climate.

But British researchers have now refuted that theory after new analysis suggested the reptiles were flourishing before the Cretaceous period came to a dramatic end.

Lead researcher Alessandro Chiarenza, a PhD student of Imperial College London, said: “Dinosaurs were likely not doomed to extinction until the end of the Cretaceous, when the asteroid hit, declaring the end of their reign and leaving the planet to animals like mammals, lizards and a minor group of surviving dinosaurs: birds.

“The results of our study suggest that dinosaurs as a whole were adaptable animals, capable of coping with the environmental changes and climatic fluctuations that happened during the last few million years of the Late Cretaceous.

“Climate change over prolonged time scales did not cause a long-term decline of dinosaurs through the last stages of this period.”

Researchers who examined fossils and made mathematical predictions previously argued the number of dinosaurs and diversity of species was already in decline before the asteroid strike.

But the new study, published in the journal Nature Communications, revealed that the change in conditions for fossilisation led previous studies to underestimate how many dinosaurs roamed the earth in the lead up to the asteroid strike.

Scientists from Imperial, University College London (UCL) and Bristol University focused on North America where the majority of dinosaur fossils are found – including the remains of Tyrannosaurus rex and Triceratops.

During the time when these huge creatures walked the Earth, the continent was split in two by a large inland sea.

The university scientists broadened their research to contradict the belief that there was a dwindling dinosaur population because far more fossils were found in western North America – rather than the east.

But the new study argues this is simply because the ground near the Rocky Mountains in the west is in perfect condition to preserve fossils when compared to the rest of the continent.

The British based team also examined the environmental conditions the dinosaurs would have endured, such as temperature and rainfall.

Changes in climate were mapped out across North America and scientists analysed how it changed over time.

This created a picture of where groups of dinosaur species could have survived – rather than simply where their fossils were found millions of years later.

Study co-author Dr Philip Mannion, of UCL, added: “Most of what we know about Late Cretaceous North American dinosaurs comes from an area smaller than one-third of the present-day continent.

“Yet we know that dinosaurs roamed all across North America, from Alaska to New Jersey and down to Mexico.”

The groundbreaking study revealed dinosaurs roamed a much larger area of the North America than previously believed – but some areas simply don’t contain the right sediment to preserve fossils.