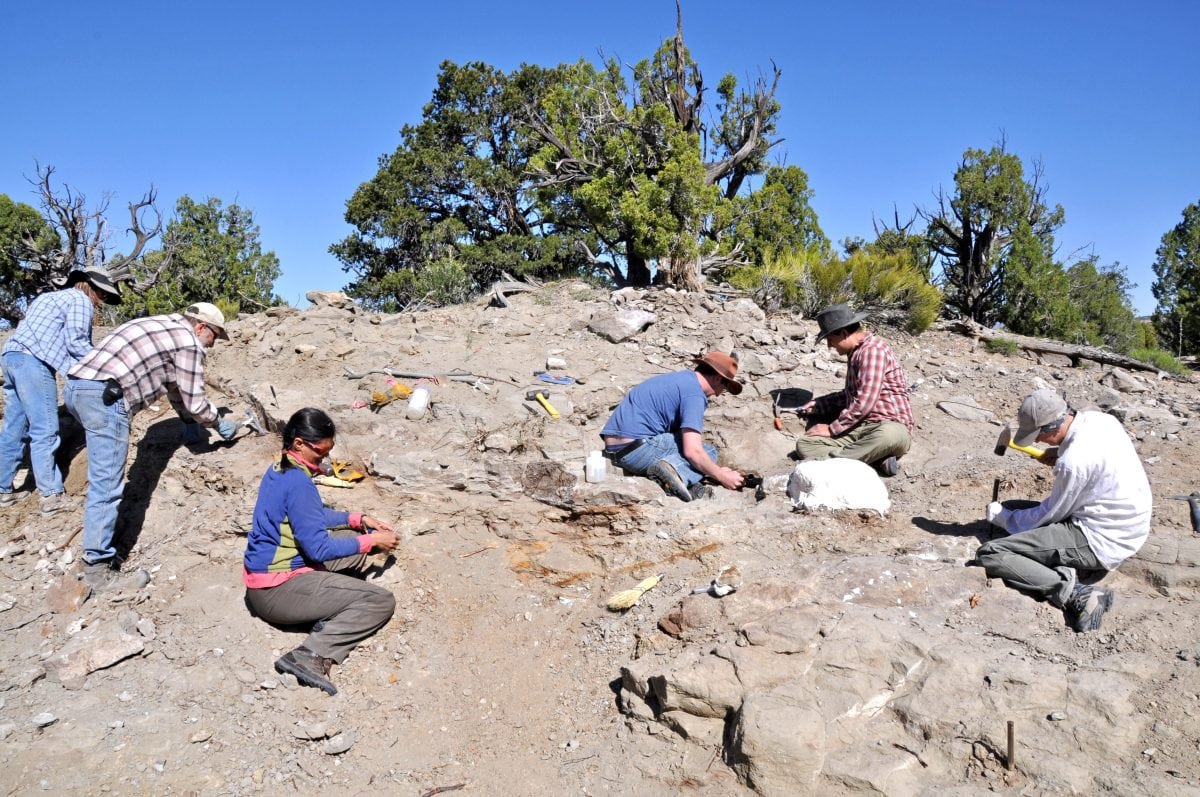 A new species of armoured dinosaur has been discovered in America and named after the volunteer that helped clean its skull.

The herbivore, which lived 76 million years ago, was dug up from the desert at the Grand Staircase-Escalante National Monument in Kane County, Utah.

And scientists believe it could have walked across a land bridge from Asia.

Standing at around three and a half feet tall and 13 feet long, Akainacephalus johnsoni is the oldest example of an armoured dinosaur from the Late Cretaceous period in western North America. 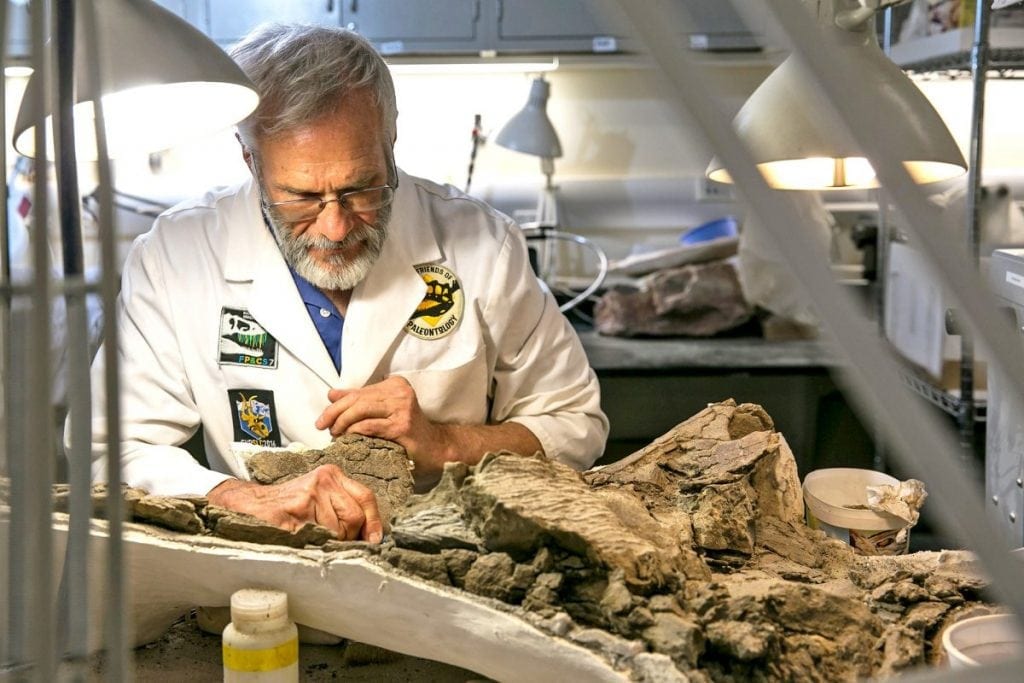 It is also the most complete complete skeleton of an ankylosaurid dinosaur that has been found in the southwestern US.

The armoured dinosaurs, known as ankylosaurids, were expected to look like other North American ankylosaurids, but instead resembled an Asian species – which had protective spiky armour covering the skull and snout.

Asian ankylosaurids had more pronounced spikes covering their skulls than the smooth boned armour of their American counterparts.

New research published in PeerJ says that although ankylosaurids originated in Asia between 125 to 100 million years ago, they are not known to have been in western North American until around 77 million years ago.

Scientists suggest lowered sea levels may have allowed the Asian dinosaurs to walk over a land bridge and immigrate to North America.

The new skeleton includes a complete skull, most of the vertebral column, a large bony club at the end of its tail, several fore and hind limbs elements, and bony body armour that includes two neck rings and spiked armor plates.

The four-legged dino would also have had small leaf-shaped teeth for eating plants.

The genus name is derived from the Greek words akaina, which means ‘thorn’ or ‘spike’, and cephalus, meaning ‘head’.

It took four years to prepare the whole skeleton after the skeleton was first discovered.

Retired chemist and paleontology volunteer Randy Johnson said the dedication was a ‘once in a lifetime honour’. 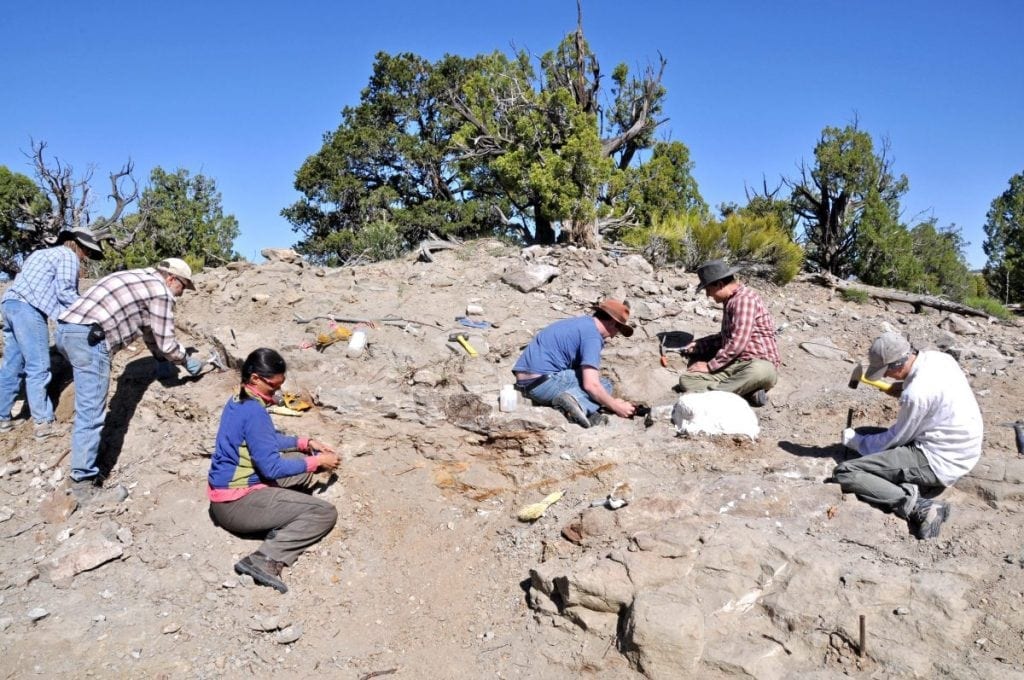 He said: “I couldn’t believe it when they told me they are naming the ankylosaur after me, a once in a lifetime honour.”

Nearly every species of dinosaur discovered over the past 15 years in the National Monument is new to science and palaeontologists are continuing to research why.

The area would have been on the southern part of the ‘lost continent’ of Laramidia – an island that stretched from Alaska to Mexico before the two parts of North America formed to make one continent.

Other recently discovered species in the area include large and small meat-eating dinosaurs, horned dinosaurs, and duck-billed dinosaurs.

Also found at the site of the new dinosaur was the skeleton of a duck-bill dinosaur known as Gryposaurus, a recently-discovered species of turtle, and a species related to alligators that is yet to be named.

Lead author and Phd student Jelle Wiersma said: “It is always exciting to name a new fossil taxon, but it is equally exciting if that taxon also provides additional insights into the bigger picture of its life, such as its diet or aspects of its behaviour, and the environment it lived in.

“Such is exactly the case with Akainacephalus johnsoni; not only is this the first described and named Late Cretaceous ankylosaurid dinosaur from Utah, but this unique animal also strengthens the evidence that distinct northern and southern provincialism existed during the late Campanian stage in Laramidia.

“A major long-term goal of our work in southern Utah is to try and understand why the species in GSENM differ from relatives of the same geologic age found in other parts of Laramidia.”

Dr Randall Irmis, co-author of the study said: “A reasonable hypothesis would be that ankylosaurids from Utah are related to those found elsewhere in western North America, so we were really surprised to discover that Akainacephalus was so closely related to species from Asia.”