"How much are we paying Allegra Stratton for these pearls of wisdom?" wrote one disgruntled Twitter user. 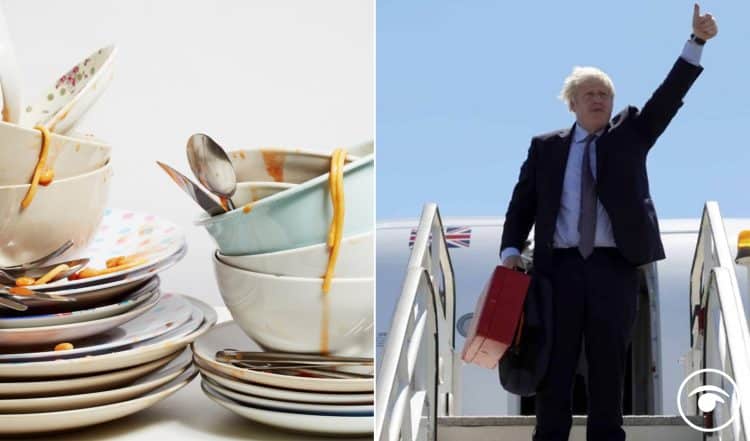 Boris Johnson’s COP26 spokeswoman, Allegra Stratton, has said that people should freeze leftover bread, order shampoo in cardboard packaging and not rinse plates before putting them in the dishwasher.

It might all be useful information but she didn’t mention whether flying to Cornwall in a private plane, like the PM did for the G7 Summit, should be banned.

At the time Piers Morgan said: “Nothing says ‘greener’ more than you flying to Cornwall from London to discuss how to reduce the globe’s carbon footprint…”

She also failed to highlight that Johnson has “almost always voted against measures to prevent climate change” as an MP, as the parliamentary vote tracking website TheyWorkForYou point out.

The capital saw nearly a month’s worth of rainfall on Sunday with homes, roads and Tube stations flooded, while a flooded hospital cancelled all surgery and outpatient appointments on Monday due to the heavy rain.

Mr Khan is holding a meeting with councils, Transport for London, the London Fire Brigade and Environment Agency on Tuesday to see how flooding can be prevented and its impact reduced.

Writing in The Telegraph, Ms Stratton says: “Did you know, according to COP26 principal partner Reckitt, who make Finish, you don’t really need to rinse your dishes before they go into the dishwasher?

“Does your brand of plastic bottle shower gel come as a bar in cardboard packaging? I bet it does. It might be freezing half a loaf of bread when you get it home, to get out later in the week, rather than throwing half of it away when it goes mouldy.

“It could be walking to the shops, not driving. Micro-steps maybe, but all the more achievable because of it.”

She responded to some of the comments to her plans on Twitter.

Ok, I know I’ve caused rows btw couples but ntl… for the ?: you know you don’t *need* to rinse b4 stacking in d’washer? Before #cop26 choose ONE thing to save carbon + cash #onestepgreener Clearly COP26 is about big stuff: coal cars + forests. But lots of micro makes macro too https://t.co/j7Nxc6L3ZS