Reports of a Tory revolt over the Dominic Cummings saga feature prominently on the nation’s front pages. 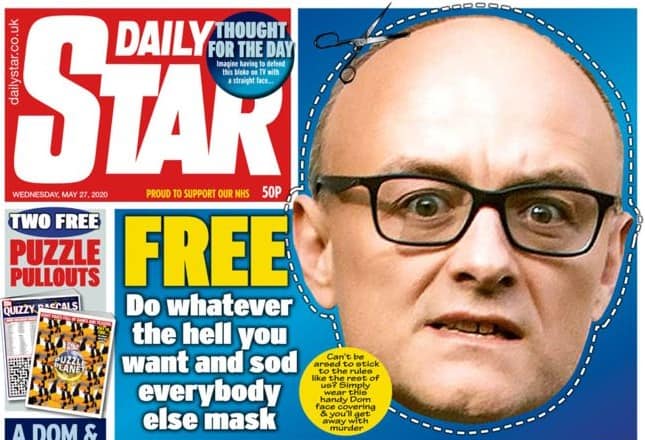 The Daily Star became an unlikely hero of the ensuing Dominic Cummings saga this morning.

The red top ridiculed his claim of taking a drive to test his impaired eyesight with the headline:

They also offered a free “Do whatever the hell you want” mask bearing the controversial aide’s face which you can cut out and use in most sticky situations.

It comes as attacks and ridicule aimed at Boris Johnson’s Government and his aide dominated the Wednesday papers.

The Daily Mirror keeps up its attacks on a Government in “chaos”, rounding on Mr Cummings and the minister deployed to front the media on Tuesday, Michael Gove.

So too The Guardian, which leads on a “rising Tory revolt” over the Prime Minister’s refusal to sack his senior adviser.

The Daily Telegraph reports on the same revolt, while The Independent adds Tory MPs will “interrogate” Mr Johnson over the Cummings case.

The Times and the i splash with a drop in Mr Johnson’s approval rating over the Cummings affair.

Some in No 10 think they’re through the worst of the Dominic Cummings row – tomorrow’s papers suggest not yet. pic.twitter.com/RalL66Lumi

Meanwhile, the Daily Mail says housing estates will face new localised lockdowns in the event of coronavirus flare-ups as the country reopens.

The Sun strikes an upbeat tone, reporting on families getting back together as lockdown restrictions ease.

The drug Remdesvir has provided a boost for the treating of Covid-19, according to the Daily Express.

And the Financial Times reports on bank warnings that soaring public debt will put the eurozone under pressure.