Nigel Farage - the former UKIP leader - had criticised the charity, claiming it was being used as a “taxi service for illegal trafficking gangs”. 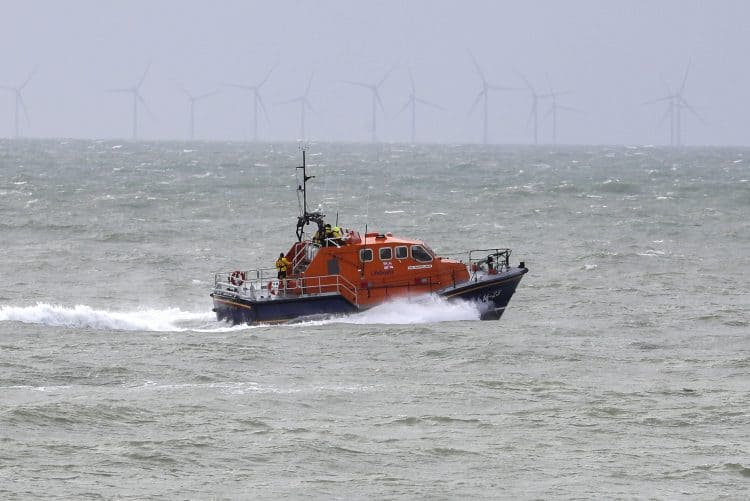 A RNLI lifeboat continues it search for the missing two fishermen that went missing near Seaford, Sussex, after their fishing boat, Joanna C, sank off the coast near Seaford, East Sussex on Saturday.

A crowdfunding campaign to buy a new hovercraft for the RNLI nicknamed ‘The Flying Farage’ is approaching £20,000.

Donations to the lifesaving charity have rocketed after the its chief executive this week described its role in rescuing people crossing the English Channel as “humanitarian work”.

Nigel Farage – the former UKIP leader – had criticised the charity, claiming it was being used as a “taxi service for illegal trafficking gangs”.

“We have seen an uplift in donations, with over £200,000 being donated yesterday alone through a combination of one-off donations, new regular support and supporters increasing their regular donation amount. This is simply incredible.”

That has spurred some supporters of the charity to support the RNLI. The crowdfunder, run by a man called Simon Harris, urged supporters to “give generously”.

He wrote: “I am trying to raise enough money to buy a new lifesaving hovercraft for the RNLI< and I would like it to be called ‘The Flying Farage’.

“I feel that this would be incredibly appropriate due to Mr Farage taking such an active interest in the RNLI’s activities right now.

“If there is any money left over, we will purchase a pint of real English ale to smash against the front in the naming ceremony, and if there is loads of money left over we may even buy a second vessel and call it ‘The Galloping Grimes’ or ‘The Hovering Hopkins’.

‘Humanitarian work of the highest order’

The head of the RNLI, Mark Dowie, insisted the sea charity was “doing the right thing” by going to people’s aid, regardless of their reason for being in the water.

He said: “The people of these islands fundamentally are decent people, and all decent people will see this as humanitarian work of the highest order.

He added: “We have seen the negative reaction to the issue over the course of the last five years, since this route was opened up.

“It’s polarising, but it’s humanitarian work of the highest order. That’s what we should remember.

“Our volunteers get out of bed in the middle of the night, leave their employment, leave their families, and go out and do this because they believe in doing the right thing. Never doubt their commitment to that.

“If you look at social media, around almost any issue you will find very strong views one way or the other. We are doing the right thing.”