“This was a political trial not just of me and the Shrewsbury pickets, but was a trial of the trade union movement," Tomlinson said. 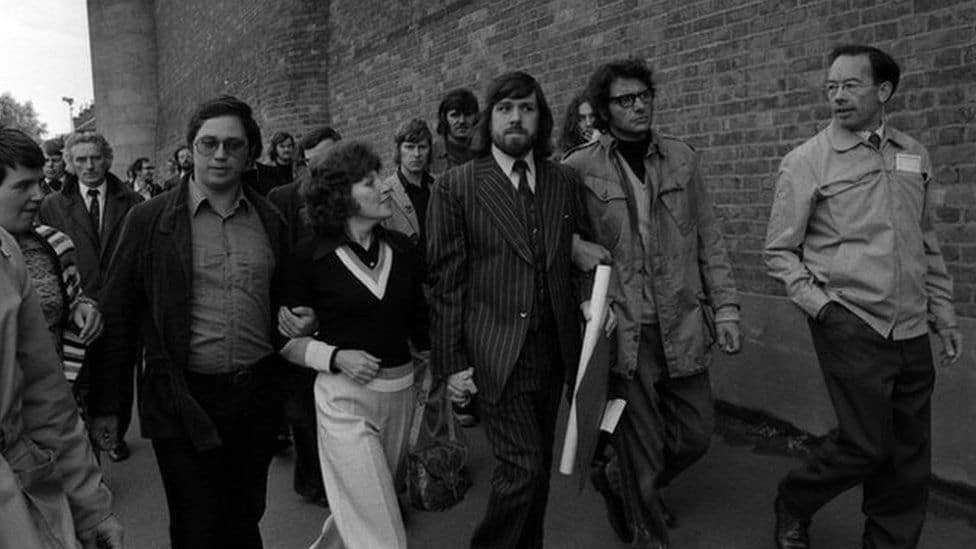 Members of the so-called Shrewsbury 24, who were convicted for picketing nearly 50 years ago, have won a bid to clear their names at the Court of Appeal.

Two dozen trade unionists who picketed during the 1972 national builders’ strike were charged with offences including unlawful assembly, conspiracy to intimidate and affray for picketing, with 22 of them convicted.

Lawyers representing 14 of the Shrewsbury 24, including The Royle Family star Ricky Tomlinson, argued the destruction of original witness statements means their convictions are unsafe.

They also claimed the broadcast of a documentary, Red Under The Bed, during the first of three trials in 1973 and 1974 was “deeply prejudicial” as it would have “provoked panic in the mind” of the jury.

On Tuesday, the Court of Appeal allowed the appellants’ challenge to their convictions.

Announcing the decision at the Royal Courts of Justice in London, Lord Justice Fulford said: “These 14 appeals against conviction are allowed across the three trials and on every extant count which the 14 appellants faced.”

The judge added: “It would not be in the public interest to order a retrial.”

In its written ruling, the Court of Appeal allowed the 14 appellants’ appeals on the ground that original witness statements had been destroyed.

BREAKING: The Court of Appeal has quashed the convictions of Ricky Tomlinson, Arthur Murray and the Shrewsbury 24, who were arrested during the national building workers strike of 1972. They are now formally – as they always have been – innocent men. pic.twitter.com/zoxDgKvKid

Lord Justice Fulford said: “If the destruction of the handwritten statements had been revealed to the appellants at the time of the trial, this issue could have been comprehensively investigated with the witnesses when they gave evidence, and the judge would have been able to give appropriate directions.

“We have no doubt that if that had happened, the trial process would have ensured fairness to the accused. Self-evidently, that is not what occurred.”

The judge added: “By the standards of today, what occurred was unfair to the extent that the verdicts cannot be upheld.”

But the Court of Appeal dismissed the appeals on a second ground, which was that the broadcast of Red Under The Bed during the first of the trials may have prejudiced the jury.

“We should never have been standing in the dock”

In a statement after the ruling, Mr Tomlinson, who was sentenced to two years in jail for conspiracy to intimidate and affray, said: “Whilst it is only right that these convictions are overturned, it is a sorry day for British justice.

“The reality is we should never have been standing in the dock.

“We were brought to trial at the apparent behest of the building industry bosses, the Conservative government and ably supported by the secret state.

“This was a political trial not just of me and the Shrewsbury pickets, but was a trial of the trade union movement.

Never should have taken 40 years.

Thoughts with the families of the 6 men who died before getting justice.
https://t.co/xeIC1NiyMq

“My thoughts today are with my friend and comrade Des Warren.

“Like me, he was victimised by the court for defending the interests of the working class.

“I’m just sorry he is not here today so we can celebrate, but I’m sure he’s with us in spirit.”

Mr Warren, who was sentenced to three years alongside Mr Tomlinson, died in 2004.

One of Mr Tomlinson’s co-appellants, Arthur Murray, who was convicted of affray and unlawful assembly and sentenced to six months, said: “We were innocent all along, yet it has taken us nearly 50 years to clear our names.

“We all came from respectful working-class families – sadly my mother and four of my siblings have passed away without knowing that we were innocent.

“This was a major miscarriage of justice and victimisation of not only innocent workers, but an attack on the working class and the trade union movement as a whole.

“We have stood firm and we have been vindicated.

49 years ago, two dozen Shrewsbury builders joined their union's first national strike for safe sites and fair pay. In response, bosses, police and courts trampled over the law to jail them.

It's taken half a century to get justice. This morning, every conviction was quashed. pic.twitter.com/cC8CatCjaw

“However, serious questions need to be asked about the role of the building industry bosses in our convictions and the highest offices of Government who all had a hand in our trial and conviction.

“Make no mistake, our convictions were a political witch-hunt.”

“However, it is important to remember that following their convictions in 1973 they were blacklisted by the building industry,” Mr Heron said.

“Many of the men could not find work and as a result suffered more punishment.

“Whilst we understand that the court was unwilling to consider the wider issues regarding the involvement of the secret state, we are calling for a public inquiry into blacklisting in the industry, the role of the building industry bosses and the secret state.”