The TV naturalist marched on Buckingham Palace to deliver a petition asking the Queen to rewild royal lands. 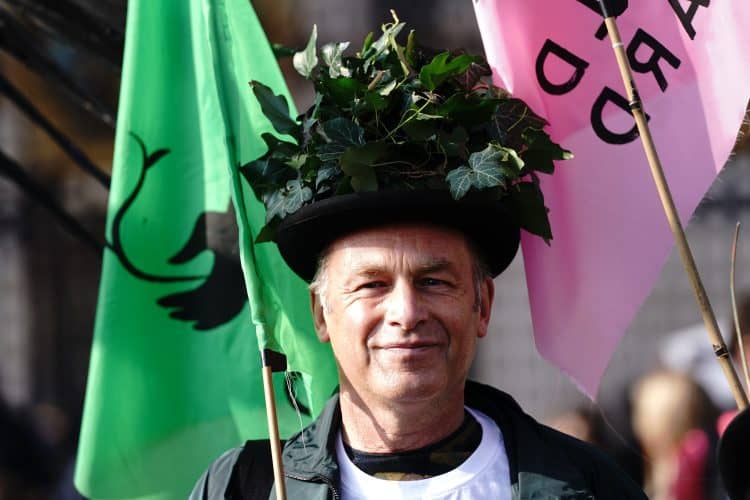 Chris Packham has led a children’s march to Buckingham Palace to deliver a petition with more than 100,000 signatures asking the Queen to rewild royal lands.

The TV naturalist and eco campaigner was joined by around 100 “school strikers” in a procession across Green Park to the palace.

The crowd of youngsters and their parents, many wearing headdresses of leaves and flowers, marched across the park waving banners to the sound of a brass band.

The petition urges the royal family to commit to rewilding its estates before the Cop26 climate summit in October.

Speaking outside the palace on Saturday, Packham said: “Frankly, my conscience is not clear.

“On my watch as an environmentalist and conservationist, I have failed these young people – I have failed to act quickly and broadly enough to prevent the crisis that we find ourselves in.

“The world that they are likely to inherit – unless we act urgently, properly and quickly now – will not be as pleasant as the one I inherited when I was their age. And that’s not something I want to take to my grave.

“It’s the most harmonious, beautiful and peaceful demonstration I have been on for some time.

“We’re asking our royal Family, denizens of the property behind us, to rewild the 800,000 acres of land that they have in the UK.

“If they were to do so it would be a very powerful message that would resonate with people all over the world.”

Among the youngsters was Noah Macaulay, 16, a sixth-form student from Hampshire and co-founder of choir SOS from the Kids, which performed at the march and is also to perform at Cop26.

He said: “The royal family has an amazing opportunity, because they own so much land, to lead by example and rewild that.

“They could really, really help to improve nature and help biodiversity.”

The royal family is the UK’s biggest landowner with an estate that includes lands owned by the duchies of Lancaster and Cornwall and the Queen.

‘Such a big difference’

Campaign group Wild Card calculates the family owns land equivalent to 1.4 per cent of the UK, much of which they say could be used to encourage nature.

Demonstrator Hannah Clayton, 41, from Islington, north London, who attended the march with her young son, said: “The royal family have a huge amount land, they are really committed environmentalists, and I think rewilding would be a really easy thing to do and makes such a big difference to biodiversity.”

Barbara Cope, 70, from Hampshire, whose granddaughter is a member of the choir, said: “I think it’s so wonderful the children are here to support rewilding and being aware of the environment. I think people will listen to children.”

A Royal Estates spokesperson said: “Members of the royal family have a longstanding commitment to conservation and biodiversity, and for over 50 years have championed the preservation and development of natural ecosystems.

“The Royal Estates are constantly evolving and looking for new ways to continue improving biodiversity, conservation and public access to green spaces, as well as being home to thriving communities and businesses which form part of the fabric of the local community.”