Last week anti-vaxxers tried to storm the head offices of the Medicines and Healthcare products Regulatory Agency to protest at the possibility of vaccinations for young people. 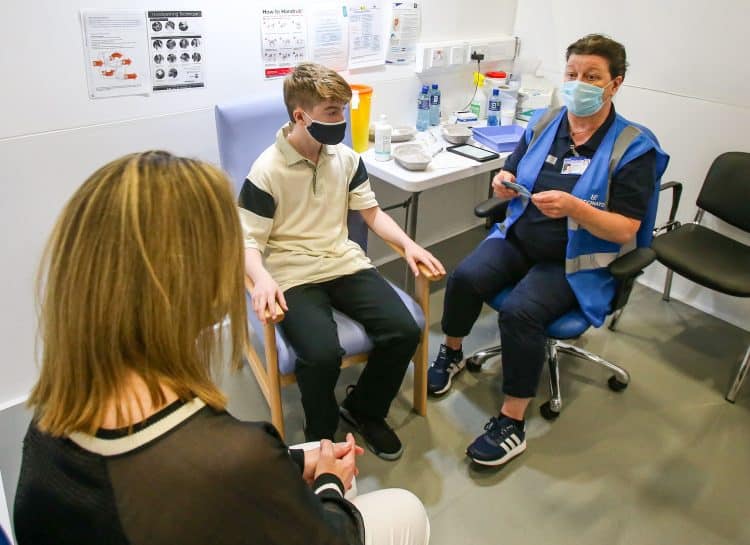 The vaccines minister has denied not listening to the experts as he insisted the Government is yet to decide whether to vaccinate healthy 12 to 15-year-olds against coronavirus. However,12 to 15-year-olds could override their parents’ wishes “if they’re deemed to be competent to make that decision, with all the information available”.

Nadhim Zahawi said if the UK’s chief medical officers recommend vaccination then it “absolutely” is the right thing to do, but he said he does not want to “pre-determine” that.

The Joint Committee on Vaccination and Immunisation (JCVI) decided against backing the move on health grounds alone because Covid-19 presents such a low risk to younger teenagers.

But Professor Chris Whitty and the three other chief medical officers in the UK are reviewing the wider benefits of vaccinating the age group, such as minimising school absences, and are expected to present their findings within days.

The Government is awaiting their advice before making a final decision but ministers have indicated they are keen to authorise a wider rollout.

Speaking on Sky’s Trevor Phillips on Sunday, Mr Zahawi said: “We have not made any decisions, so we haven’t decided not to listen to the experts.

“On the contrary, all four ministers, the Secretary of State, Sajid Javid, and his fellow ministers in the devolved administrations have agreed to ask the chief medical officers to convene expert groups, including the JCVI being in that, to be able to recommend which way we should go on healthy 12 to 15-year-olds.”

He said parents of healthy 12 to 15-year-olds will be asked for consent if coronavirus jabs are approved for their children.

“I can give that assurance, absolutely,” he said.

But on Times Radio he said 12 to 15-year-olds could override their parents’ wishes “if they’re deemed to be competent to make that decision, with all the information available”.

Mr Zahawi told the T&G programme: “What you essentially do is make sure that the clinicians discuss this with the parents, with the teenager, and if they are then deemed to be able to make a decision that is competent, then that decision will go in the favour of what the teenager decides to do.”

Meanwhile, Professor Peter Openshaw, a member of the New and Emerging Respiratory Virus Threats Advisory Group (Nervtag) which advises the Government, told BBC Breakfast he is “a little surprised” at the JCVI’s decision.

“We do know the virus is circulating very widely amongst this age group, and that, if we’re going to be able to get the rates down and also prevent further surges of infection perhaps later in the winter, then this is the group that needs to become immune,” he said.

“And the best way to become immune is through vaccination, and there’s never been as much information as this in the past. To think there hasn’t been enough research is completely wrong.”

Prof Openshaw added: “To my mind, the public health benefit is very, very important, and we have to take the wider view that, unless we do get infection rates down amongst this particular part of the population, it will be very, very hard to prevent further large recurrences (of Covid-19).

“I would say that teenagers are often amongst the most altruistic and the most generous people in society. They often think very deeply about these moral and ethical issues and they want to protect others as well.

“So I would think that a lot of teenagers, actually, if they see the evidence in the round, would prefer to be vaccinated.”

On Friday, the JCVI approved a widening of the vaccination programme to another 200,000 children aged between 12 and 15 who have underlying health conditions.

But they stopped short of recommending the full rollout after investigating potential side-effects, such as the extremely rare events of inflammation of the heart muscle, known as myocarditis, after Pfizer or Moderna vaccinations.

While the condition can result in short periods of hospital observation, followed by typically swift recoveries, the JCVI concluded that the medium to long-term outcomes are still uncertain and more follow-up time is needed to get a clearer picture.

Professor Wei Shen Lim, the JCVI’s chairman of Covid-19 immunisation, said the group’s view is that the benefits of vaccinating the age group “are marginally greater than the potential harms” but that the benefits are “too small” to support a universal rollout at this stage.