Jolie said: “I’m thinking of all the women and girls who don’t know now if they can go back to work or school. And I’m thinking of the young Afghans who are worried that they will lose their freedom.” 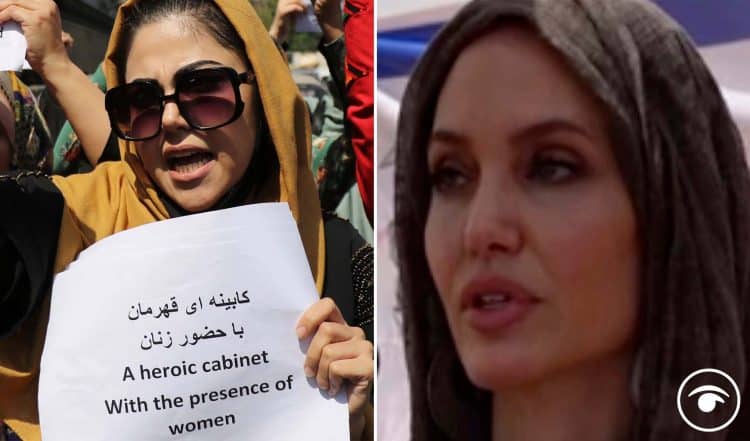 Taliban special forces have brought a protest march by Afghan women demanding equal rights to an abrupt and frightening end in Kabul by firing shots into the air.

The women’s march – the second in as many days in the capital – began peacefully as demonstrators laid a wreath outside Afghanistan’s defence ministry to honour Afghan soldiers who died fighting the Taliban, before marching on to the presidential palace.

One prominent protester, 20-year-old Maryam Naiby, said of the campaign in the wake of the Taliban seizing power: “We are here to gain human rights in Afghanistan.

“I love my country. I will always be here.”

As the protesters’ shouts grew louder, several Taliban officials waded into the crowd to ask what they wanted to say.

The Taliban official promised women would be given their rights, but the women, all in their early 20s, were sceptical.

As the demonstrators reached the presidential palace, a dozen Taliban special forces ran into the crowd, firing into the air and sending demonstrators fleeing. One witness told reporters the Taliban also fired tear gas.

Angelina Jolie has expressed concern about the situation of women and girls in Afghanistan.

The actress, who is also a special envoy to the United Nations High Commissioner for Refugees, told a German newspaper on Sunday that she does not think the incoming government can simply turn back the clock so that everything will be as it was 20 years ago.

But she nevertheless has major worries about the situation for women there.

Jolie told the weekly Welt am Sonntag: “I’m thinking of all the women and girls who don’t know now if they can go back to work or school. And I’m thinking of the young Afghans who are worried that they will lose their freedom.”

Taliban fighters captured most of Afghanistan last month and celebrated the departure of the last US forces after 20 years of war.

The insurgent group must now govern a war-ravaged country that is heavily reliant on international aid.