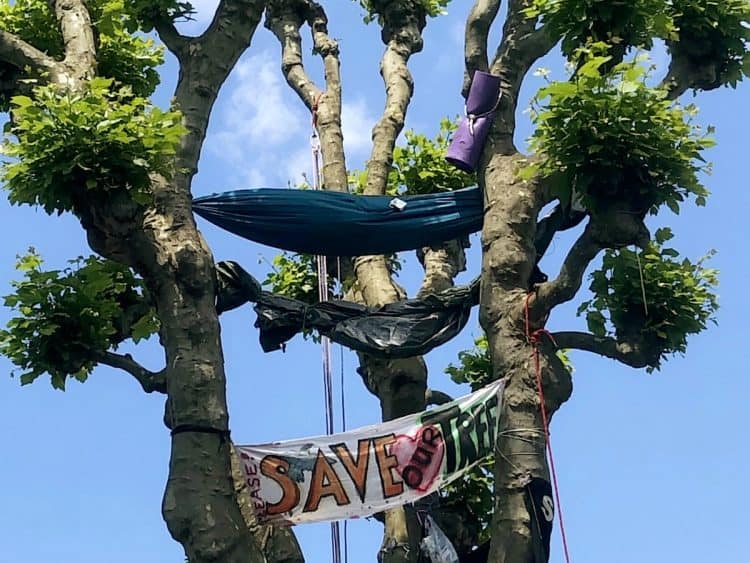 A group of campaigners are battling to save a 100-year-old tree from being chopped down – by guarding it day and night.

They are watching over the aged plane tree in case council chainsaws come after it when they aren’t looking.

The tree has been condemned as the council say it could cost them £400,000 in claims if they allow it to grow further and undermine nearby houses.

The group stand by the tree for two-hour shifts while the hardiest among them risk the wind and rain to sleep in a hammock in its branches at night.

The eco-conscious protestors are battling a bid by insurer Allianz, who want it chopped down.

They have vowed not to leave until they get a proper meeting with the council.

They say around 200 other trees in Haringey are at risk and that they are protesting about a wider problem and not just one tree.

Campaigner Giovanna Iozzi said: “This tree has been guarded since 1 May.

“We have a lot of local people who want to save the tree. No one seems to want to take it down.

“We have someone sleeping here every night and there is always someone here. We are engaging with the local community who are very supportive.

“Ninety nine per cent of the houses’ owners are supportive, including in the houses that are supposed to be affected by it. They completely understand what we are trying to do.

“We have a rota of 56 people including around eight overnighters.

“There has not been too much rain because we are in a drought but one night it poured and our night shifter got absolutely soaked.

“They came to my house to have a hot shower and toast and tea. Lots of people were bringing him tea and croissants.

“We have got a campaign going and we have people from as far away as Ealing and Croydon coming to us.”

She added: “The insurance companies are using bullying tactics.

“We are fighting to get some sort of legal framework that protects trees. Often the tree will be implicated as the problem when that is not the full picture.

“Some people say ‘it’s just a tree’ but it is a symbol of a wider issue.

“There are 18 insurance claims on this street where trees are affected, 15 on nearby Stapleton Hall Road and 200 across Haringey.

“The council’s tree department has to work harder at maintaining our mature trees.

“There should be larger fall pits and an irrigation programme to protect trees.

“In Australia they use wastewater to water trees. We do not feel the council have engaged with us meaningfully.

“A couple of times they came under the tree to try and have a meeting. We asked for a full meeting with residents and protestors.

“They are doubling down on their position and not engaging us.

“They go on about something called co-production which is supposed to mean making policy based on residents’ views.

“We are astonished the Senior Tree Officer had not seen the new tree plan.

“What we want is full disclosure of the insurance company’s report, which the council say is commercially sensitive, we want an independent survey done, we are asking for a full meeting with the council to look after trees.

“Trees are multi-tasking. They absorb pollution, they are carbon sinks, they connect us with nature, and they are so good for our mental health.

“We don’t know how long we will have to go on for but we will be here until the end.”

An Allianz spokesperson said the company looks for “long-term solutions that protect our natural and built environment” and is “committed to operating in a climate-friendly way”.

They added: “What is at stake here is the solidity of two homes.

“Many experts, including an arboriculturist, have assessed the situation over time and looked at the best way to protect these properties from further structural damage while also saving the tree.

“Unfortunately, the only practical solution is to remove the tree, as an independent engineer has confirmed.”

Mike Hakata, deputy leader of Haringey Council and cabinet member for climate action, environment and transport, said he did not want to see trees removed and had met with residents in Oakfield Road on a number of occasions.

He added: “We have been fighting to save this tree since the original claim was made in 2015, but the technical evidence we have received supports the requirement for this tree to be removed, as it is causing significant damage to the residents’ homes.

“If the tree remains and these adjoining homes are underpinned, we will be facing a high-value insurance claim in excess of £400,000.

“That cost would need to be met by the council rather than an insurance company or any other organisation.

“This is simply beyond our budgetary control and would have significant impact on other key service areas.

“As a council, we are fighting to get this law changed and will continue to fight for our residents.

“In the meantime, we will look to provide a more suitable tree at this location once the existing tree is removed and plant additional trees to ensure that we at least match the overall environmental benefit that the removed tree would otherwise bring.”