After last night’s humiliating defeat for Theresa May, with many of her MPs defying the government whip, Brexiteers woke up to a rejection of the chaos of a no deal Brexit. As Theresa May hoarsely vowed to carry on putting her deal to MPs repeatedly, Donald Trump made a last minute intervention. According to The […] 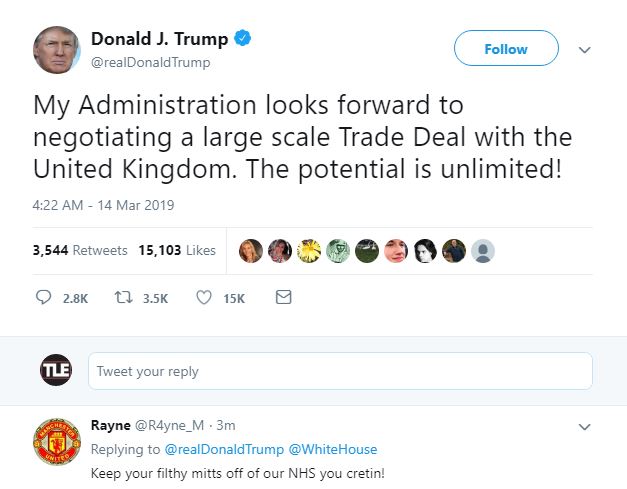 After last night’s humiliating defeat for Theresa May, with many of her MPs defying the government whip, Brexiteers woke up to a rejection of the chaos of a no deal Brexit.

As Theresa May hoarsely vowed to carry on putting her deal to MPs repeatedly, Donald Trump made a last minute intervention.

According to The Telegraph Nigel Farage claims he has been lobbying Donald Trump to put pressure on the UK to leave the EU with no Brexit deal lined up.

Today The US President tweeted with eerie timing:
“My Administration looks forward to negotiating a large scale Trade Deal with the United Kingdom. The potential is unlimited! “

The US trade objectives included:

“Full market for US products” – which could end NHS bargaining protections that keep the cost of medicines down.

Stopping goods being classified as “used goods that are restricted or banned” even those containing dangerous asbestos.

Empower the US to ditch the trade deal at any time if it objects to a UK trade agreement with a “non-market economy”, such as China.

And in a massive loss of sovereignty – meddling in Britain’s control; of its own currency, by controlling whether “the UK avoids manipulating exchange rates.