Run out of petrol? Opportunistic Facebook floggers could help - but it'll cost you. 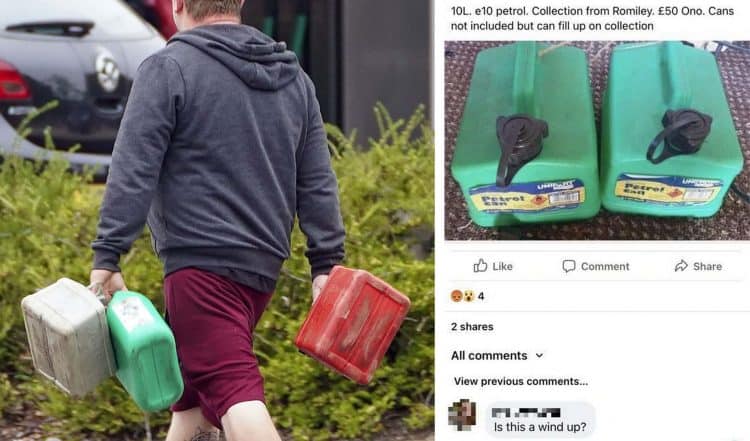 As Brits fighting on the nation’s forecourts, some opportunists are cashing in on the spiralling fuel crisis by selling petrol online at huge mark-ups.

Over the past few days, fuel prices have risen to their highest level in eight years – with some petrol stations charging upwards of £2 per litre. But others have been using sites such as Facebook to illegally sell fuel for almost four times the pump price.

After posting an ad on a community Facebook page belonging to a Stockport neighbourhood, a woman has come under fire for brazenly attempting to sell 10 litres of petrol for £50.

She wrote: “10L e10 petrol. Collection from Romiley. £50 Ono. Cans not included but can fill up on collection.” The post received backlash from outraged locals, with one Facebook user asking: “Is this a wind up?”

Although the post has since been deleted, the same user who posted the ad has shared another post in the Marple, Romiley & Bredbury Community group, saying: “Thanks a lot to whoever reported me for trying to make some money. This is not what community spirit is about.”

This post has sparked even more outrage from locals, with one user commenting: “Selling something that’s scarce at 4x its RRP is definitely not community spirit. Taking those cans to a local ambulance station and donating them is community spirit. Do you know it’s illegal to sell petrol without a licence?”

Another said: “Community spirit? By ILLEGALLY selling petrol 5 times the cost it really is? (and yes it is illegal unless you have a license.. Well done.. Now police know who you are..)

One group member added: “I need a brief exchange of words with you and there are only two of them, seven letters, three of them are f.”

In Hull, another Facebook user sparked outrage by offering five litres of petrol for £15 on Facebook Marketplace, with users calling this particular ad the work of a “con man”, blaming “selfish people deciding to “stock-up on fuel” as the reason for the current situation.

A number of similar ads have been listed on Facebook Marketplace over the past few days, but it’s been difficult to tell how serious they are. In Dewsbury, for instance, one user posted: “20 litres of E10 unleaded petrol in a new Halfords jerry can. Very rare. Perfect gift for a selfish w*****.”

Related: Grant Shapps finally admits Brexit is a ‘factor’ in the fuel crisis