Leading figures in the livestock industry say that the animals face being killed and burned because Priti Patel has failed to include the butchers on a list of shortage occupations. 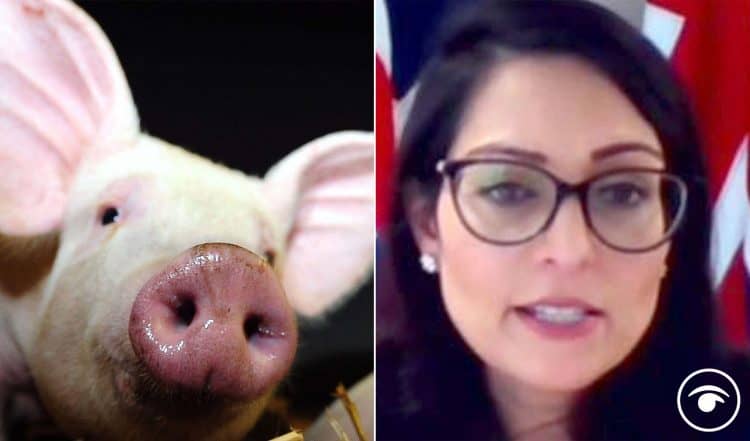 Brexit minister Lord Frost has said the UK will not sweep away the Northern Ireland Protocol as he warned conflict over the deal risks creating “cold mistrust” with the European Union.

It comes as the UK faces having to kill nearly 100,000 pigs due to a shortage of butchers to work in slaughterhouses following Brexit.

The negotiator of the post-Brexit agreement renewed calls on Saturday for Brussels to accept a “substantial and significant change” to the deal.

Northern Ireland is effectively kept in the EU’s single market for goods by the protocol, which prevents a hard border with Ireland but has created trade barriers with Britain.

Unionists have pressured for the abolition of the protocol, but Brussels has repeatedly rejected the UK Government’s plea to negotiate it.

Speaking at the British-Irish Association conference in Oxford, Lord Frost said: “The stakes are high. The arguments can be bitter.

“And I worry this process is capable of generating a sort of cold mistrust between us and the EU which could spread across the relationship.

“It’s holding back the potential for a new era of cooperation between like-minded states in a world which needs us to work together effectively.”

The exodus of EU workers has led to an “absolute crisis” in pig farming and forcing healthy animals to be destroyed, said the National Pig Association.

Leading figures in the farming industry have told the Daily Mail that they blame Priti Patel for failing to put butchers on the list of shortage occupations so that foreign workers could come in on a skilled visa and fill any gaps in the sector.

NPA chief executive Zoe Davies told the BBC’s Today programme: “The issue is that because, for whatever reason, a lot of workers have left processing plants and gone home because a lot of them are eastern European.

“The abbatoirs themselves cannot process the number of pigs that we supply them with on a weekly basis.

“So for the last six to eight weeks, all of the major processers have been cutting their kills by up to 25%, which is leading to pigs being kept on farms for far longer than they should be. And that is leading to an absolute crisis for us on the pig side.”

Davies added “Even if we stopped serving sows now – and that means mating them – it will take 10 to 11 months before the pigs stop coming.

“So you’re getting people in increasingly desperate situations. They are getting into debt. They’re getting very stressed out. And we’re now starting to head towards a situation where healthy animals may well need to be destroyed.”