Captain Tom's death was confirmed by his two daughters, Hannah and Lucy, in a statement on Tuesday afternoon. 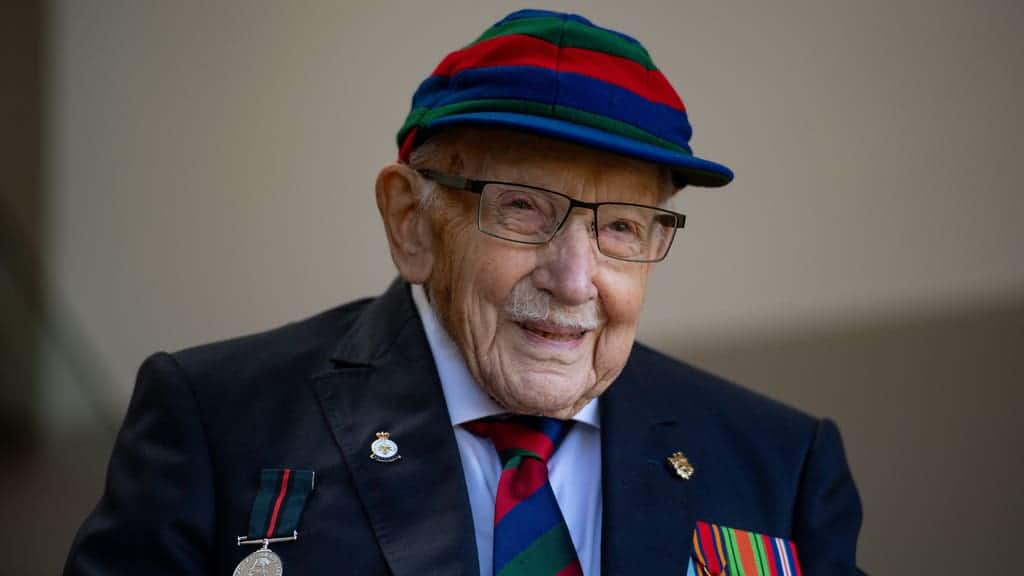 Captain Sir Tom Moore, who raised more than £30 million for NHS charities during lockdown, has died after testing positive for coronavirus.

The 100-year-old was taken to Bedford Hospital on Sunday, after requiring assistance with his breathing. His daughter said he had contracted pneumonia a few weeks earlier, and tested positive for Covid-19 last week.

Moore’s death was confirmed by his two daughters, Hannah and Lucy, in a statement on Tuesday afternoon.

Born in Keighely, West Yorkshire, in April 1920, Moore’s remarkabel fundraising efforts during the first national lockdown last April saw him raise £38.9 million for NHS charities – after his pledge to walk 100 laps of his garden by his 100th birthday captured the country’s heart. He initially set out to raise just £1,000.

Boris Johnson, the prime minister, said that Moore’s “heroic efforts have lifted the spirits of the entire nation”. He was praised as a “one-main fundraising machine” by the Duke of Cambridge.

In acknowledgement of his efforts, he was knighted by the Queen during a unique open-air ceremony at Windsor Castle in summer 2020.

Sir Tom rounded off 2020 with a trip to Barbados with his family, and his fundraising efforts were marked during the New Years drone display in London, as his figure appeared over the O2 Arena.

On Tuesday, the Archbishop of Canterbury described Sir Tom as “a gift”, telling ITV’s Good Morning Britain: “I think one of Sir Tom’s extraordinary achievements is to stand for all of us in the most remarkable way – in his courage, in the way he supported the NHS and raised so much money, and now to stand for all of us in this battle against Covid, he stands for every patient.”

In a statement, Captain Tom’s daughters Hannah and Lucy said: “It is with great sadness that we announce the death of our dear father, Captain Sir Tom Moore.

“We are so grateful that we were with him during the last hours of his life; Hannah, Benjie and Georgia by his bedside and Lucy on FaceTime. We spent hours chatting to him, reminiscing about our childhood and our wonderful mother. We shared laughter and tears together.

“The last year of our father’s life was nothing short of remarkable. He was rejuvenated and experienced things he’d only ever dreamed of.”

Related: “We will get through this”: Captain Sir Tom Moore in his own words

5 wines to try this Valentine’s Day