Corbyn had said if the flooding had happened in Surrey, the Tory response “would have been a very different story” and Johnson was heckled as he finally visited Yorkshire. 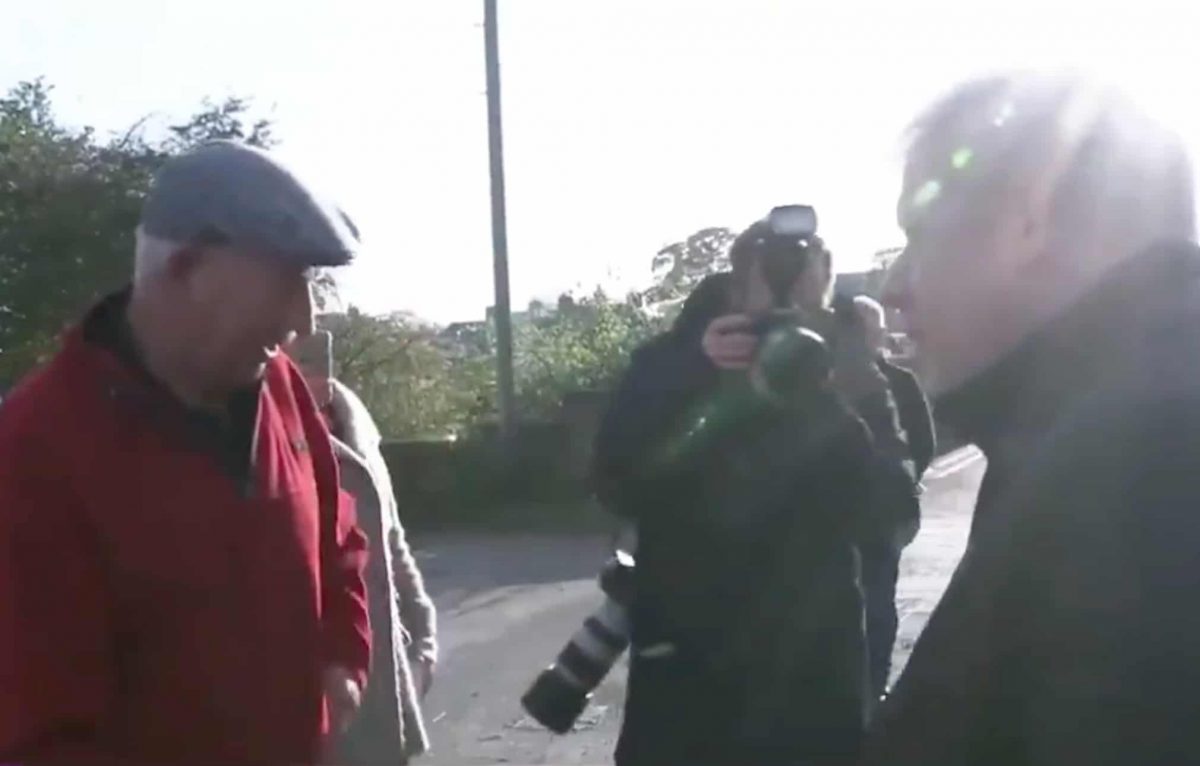 Finally visiting areas devastated by severe flooding that claimed one woman’s life and forced people from their homes, Boris Johnson was heckled today.

“You took your time, Boris,” one local told the Prime Minister as he donned wellies to visit Yorkshire where many homes have been devastated. Another asked Johnson: “Where’ve you been?”

Another woman was too angry to talk to the PM, insisting “You’ve not helped us.”

Boris Johnson finally visiting the areas of the North East six days after flooding ruined many homes, refused requests by the local press for interviews, instead only agreeing to a statement to the pooled media.

The Tory Party leader was criticised for only convening the emergency Cobra committee after Labour leader Jeremy Corbyn wrote to him demanding an emergency response.

Corbyn said if the flooding had happened in Surrey in the South East, it “would have been a very different story.”

On Tuesday, the Prime Minister announced relief funding would be made available for those affected by the floods.

It came amid criticism the Government had not done enough to help, as the flooding threatened to become an election issue.

He said funding for locals councils to help affected households would be made available to the tune of £500 per eligible household.

Up to £2,500 would be available for small to medium-sized businesses which have suffered severe impacts and which are not covered by insurance.

Johnson also said 100 Armed Forces personnel would be deployed to help the recovery effort in badly-hit areas of South Yorkshire.

The PM chaired a meeting of the Government’s emergency committee Cobra on Tuesday afternoon, as pressure mounted on ministers to take action.

Speaking afterwards, he said the country had to “prepare for more floods” this winter because the ground is so waterlogged.

He said: “The worry for me is that there are some people who are continuing not to listen to the advice of the emergency services.

“I would just say to people – the emergency services do have sound advice. When they advise you to evacuate, you should do so.”

“You can’t trust Boris Johnson to look out for the North or the Midlands or protect our communities from flooding,” he said.

“But Labour will provide an extra £5.6 billion in flood defence funding, to level up flood defences over 10 years.

“Every home ruined and every business destroyed demands we act now.”

It comes after Labour leader Jeremy Corbyn branded the Government’s response as “woeful”, while Lib Dem leader Jo Swinson said it was not taking it seriously enough.

Jeremy Corbyn said if the flooding had happened in Surrey in the South East, it “would have been a very different story”.

He said Johnson had only called a Cobra meeting on Tuesday after he had written to the Prime Minister demanding one.

Speaking at a rally in Blackpool, Corbyn added: “More than a thousand homes have been evacuated and one woman, Annie Hall, has lost her life. Our hearts go out to her family and friends.

The government’s emergency Bellwin scheme reimburses councils for costs they incur during a response to flooding, for items such as rest centres, temporary accommodation and staff overtime.

Annie Hall, the former high sheriff of Derbyshire, died after she was swept away by water on Friday in Darley Dale, near Matlock.

Jeremy Corbyn returned to south Yorkshire to meet families and volunteers on Tuesday afternoon and announced plans for a new £5.6 billion fund to level up flood defences over 10 years.

Labour said this will be funded through its £250 billion Green Transformation Fund and prioritise “areas of need” such as the North West, Yorkshire an the East Midlands.

The party also said that Conservative spending on flood defences “overwhelmingly favours” the south east. Spending on defences has been cut over a decade of Tory rule.

Downpours last week meant several areas in Yorkshire and the East Midlands were struck by a month’s worth of rain in a single day.

Around half the 700 residents of Fishlake, near Doncaster, left the village and those who stayed behind have faced waist-high floods.

Visiting Fishlake on Tuesday, Lib Dem leader Jo Swinson accused the Government of not taking it as seriously as it should.

She added: “It should be declaring a national emergency so they can open up the ability to apply to the EU for the emergency funds that are available at times of extreme floods.

“They are not yet doing that and they should be doing that.”

She said the party’s policy of spending £5 billion on flood defences was necessary, particularly as the climate emergency would make such events more common.

Thirty-five flood warnings are still in place across England as people in affected areas are urged to heed the warnings of emergency services.

The warnings sit alongside a further 80 flood alerts – warning residents to be on alert for possible flooding – after heavy rains over the past week.

The warnings and alerts are in place in locations from Somerset and East Sussex in the South, to as far north as the Lower River Nidd near Harrogate in Yorkshire, and the Holderness Drain in east Yorkshire.

Seven flood alerts are also in place in Wales.

More widespread rain is forecast for Wednesday, with the Met Office having issued a weather warning for heavy rain, bringing possible transport disruptions from late afternoon onwards, across south Wales and parts of England’s south-west.

And Boris Johnson has passed on warnings there could be more flooding across the country this winter as rain continues.

Boris Johnson says widespread flooding is ‘not a national emergency’