"Boris Johnson: Continuing a proud tradition of Tory PMs with an interest in Peppa Pig World," wrote one person next to a picture of David Cameron. 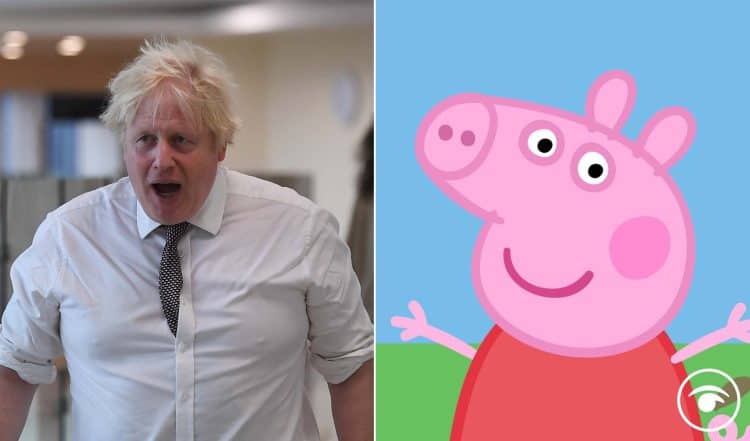 Boris Johnson stumbled through a major speech in which he lost his place in his notes, talked about a day trip to a Peppa Pig theme park and imitated a car, before insisting: “I thought it went over well.”

The prime minister’s keynote address to business leaders saw him struggle with his papers, at one point muttering “blast it” before shuffling sheets and begging the audience to “forgive me” as he tried to find the right point to resume.

The speech to the Confederation of British Industry was an attempt to set out how pursuing green policies could help in the “moral mission” to “level up” the UK.

But it risks being remembered for Mr Johnson’s reflections on his trip to Peppa Pig World, comparisons with Moses, a reference to Lenin and the spectacle of a Prime Minister of the United Kingdom making car noises.

Following the speech in South Shields, Mr Johnson was asked: “Is everything OK?”

He told ITV: “I think that people got the vast majority of the points I wanted to make and I thought it went over well.”

But Labour mocked Mr Johnson online, saying “the joke’s not funny any more”, while Liberal Democrat leader Sir Ed Davey said: “Businesses are crying out for clarity. Instead, all they got was Boris Johnson rambling on about Peppa Pig.

“It is a perfect metaphor for Johnson’s chaotic, incompetent Government as it trashes our economy, but it is not worthy of a British Prime Minister.”

Mr Johnson told the audience how he spent Sunday at Peppa Pig World in Hampshire, describing it as “very much my kind of place” but “they are a bit stereotypical about Daddy Pig”.

Praising the ingenuity of the private sector, Mr Johnson said “no Whitehall civil servant could conceivably have come up with Peppa”, which had become a £6 billion global business with theme parks in the US and China.

He mimicked the sound of a roaring car as he said electric vehicles, while lacking the characteristic noise of a high-powered petrol engine, “move off the lights faster than a Ferrari”.

He quoted Soviet leader Lenin as he said electrification will be the key to the new “green” industrial revolution.

“Lenin once said the communist revolution was Soviet power plus the electrification of the whole country,” Mr Johnson said.

The Prime Minister compared his 10-point plan for a green economy with the 10 commandments in the Bible.

It was “a new Decalogue that I produced exactly a year ago when I came down from Sinai”, he said.

Well that was a LOT to take in!

But the Peppa Pig memes are well worth a look.

There was a serious poont made though.