"In my view Fiona Bruce and Laura Kuenssburg are acting as the Fifth Column for the Tories. Their bias is beyond question", one person said.

by Charlie Herbert
in Media, News 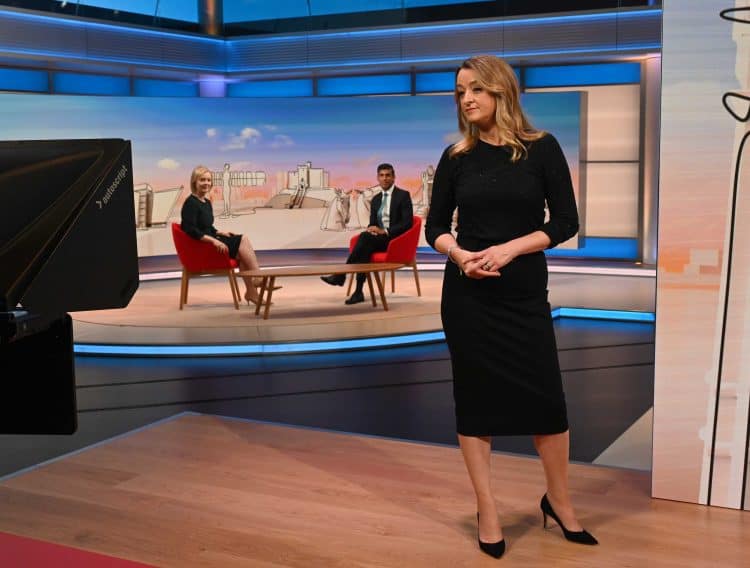 Viewers have called for BBC presenters Fiona Bruce and Laura Kuenssberg to be investigated over their political “impartiality,” following the backlash to a BBC News presenter who said she was ‘gleeful’ at the news that Boris Johnson had dropped out the Tory leadership race.

Presenter Martine Croxall was on air when the news broke that Johnson would not challenge for the Tory leadership and a return to Number 10.

She told viewers: “Well, this is all very exciting, isn’t it? Am I allowed to be this gleeful? Well, I am!”

Later in the segment, she could be heard giggling and interrupted one of her guests: “Sorry! I shouldn’t probably. I’m probably breaking some sort of terrible due impartiality rule by giggling.”

The comments caused outrage amongst some, including former culture secretary Nadine Dorries, who said it was an example of “deep seated bias” within the BBC.

Croxall is understood to have been taken off air following the comments because they breached the BBC’s strict impartiality rules.

The broadcaster has launched an “urgent” investigation, saying in a statement: “It is imperative that we maintain the highest editorial standards. We have processes in place to uphold our standards, and these processes have been activated.”

But this has led some to ask why the broadcaster has not taken similar action against what they believe to be examples of Tory bias from presenters Laura Kuenssberg and Fiona Bruce.

One person tweeted: “Just read Maxine newsreader is to be investigated for impartiality. Please start with Fiona Bruce first question time is ruined b/c of her bias towards Tories.”

A third wrote: “Fiona Bruce & Laura Kuenssberg should be investigated then. @BBCNews you can’t pick and choose depending which way the bias is. You long since abandoned balance This is truly pathetic.”

A fourth added: “Apparently BBC presenter Martine Croxall has been suspended for a ‘potential breach of impartiality’. In my view Fiona Bruce and Laura Kuenssberg are acting as the Fifth Column for the Tories. Their bias is beyond question. The BBC won’t act against them.”

And a fifth fumed: “If the BBC are investigating Martine Croxall for impartiality over one comment, it’s about time they investigated Laura Kuenssberg and Fiona Bruce who can’t conceal their pro-Tory bias every time they are on!”

The BBC’s guidelines make it very clear that employees are prohibited from expressing any bias on a matter.

Section 4.1 of their editorial guidelines states: “The term ‘due’ means that the impartiality must be adequate and appropriate to the output, taking account of the subject and nature of the content, the likely audience expectation and any signposting that may influence that expectation.”

The BBC’s impartiality rules are often a hot topic of debate, with the broadcaster having previously threatened to take away the Twitter accounts of some if they refuse to abide by the strict rules.