Martine Croxall struggled to contain her glee when it was revealed Boris Johnson was no longer running for prime minister. 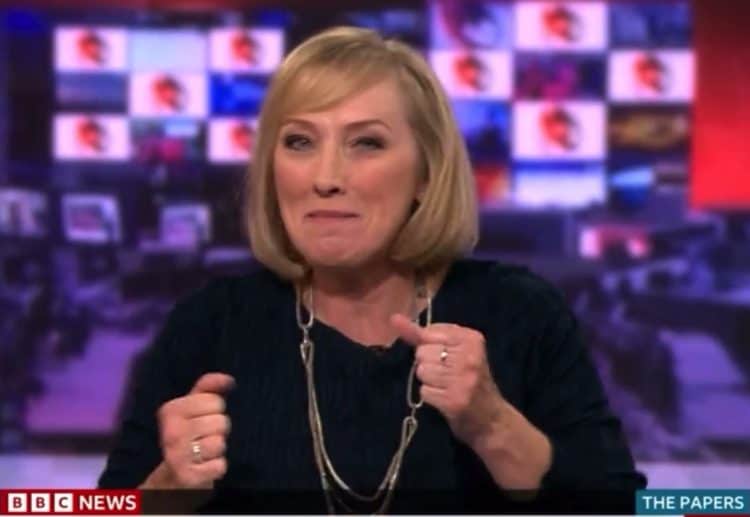 BBC News presenter Martine Croxall has been taken off air amid claims she showed bias after Boris Johnson pulled out of the Tory leadership contest.

During her introduction to Sunday night’s edition of The Papers, in which members of the press and experts look at how the main stories of the day were covered, she said: “Well this is all very exciting, isn’t it?” adding: “Am I allowed to be this gleeful? Well I am.”

The programme started at 10.30pm on Sunday, around 90 minutes after Mr Johnson pulled out of the Tory leadership race.

In her first question to her guests, Croxall also remarked: “Can we even show you the front pages just yet, have they arrived? No they haven’t arrived.

“It’s all a little bit, you know, lastminute.com isn’t it? Because all the front pages were probably out of date by the time we received them.”

Croxall also suggested during the programme that her comments could have breached BBC guidelines.

Responding to a guest’s joke aimed at Mr Johnson, she said: “I shouldn’t probably (laugh). I’m probably breaking some terrible due impartiality rule by giggling.”

Some viewers, including several Tory MPs reacting to a clip on social media, complained it displayed bias.

A statement from the broadcaster said: “BBC News is urgently reviewing last night’s edition of The Papers on the News Channel for a potential breach of impartiality.

“It is imperative that we maintain the highest editorial standards. We have processes in place to uphold our standards, and these processes have been activated.”

Former culture secretary Nadine Dorries said on Twitter: “This lack of impartiality demonstrates how deep seated the bias is.”

On Sunday evening, Mr Johnson claimed he had the nominations needed to make it onto the ballot paper but admitted he could not unite his warring party.

The former prime minister said there was a “very good chance” he could have been back in No 10 by the end of the week if he had stood.

However his efforts to “reach out” to his rivals, Rishi Sunak and Penny Mordaunt, to work together had not been successful so he was dropping out.