Both leaders have been asked about the potential for their countries to become republics. 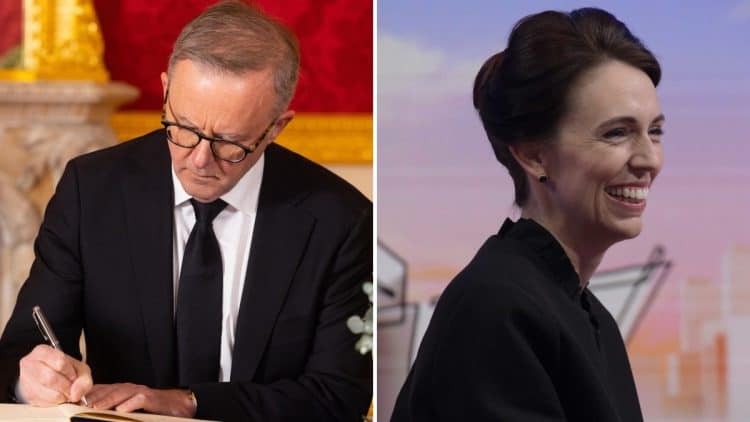 The prime minister of Australia has said now is not the time for constitutional questions, as his counterpart in New Zealand made clear she had no intention of steering away from a monarchical system.

The leaders were both asked about the potential for their countries to become republics as they visited the UK for the Queen’s funeral.

Jacinda Ardern suggested she still believes New Zealand is likely to make the transition in in her lifetime, but said bonds will remain between Commonwealth nations even as relationships with the UK evolve over the years.

Meanwhile, Anthony Albanese batted away questions over Australia’s constitution in the wake of the Queen’s death, arguing now is not the right time to discuss these issues.

Reflecting on the change in sovereign, Ms Ardern said the move from Queen to King will not be “jarring” for New Zealand as Charles is “well known” in the country.

She told the BBC’s Sunday With Laura Kuenssberg show: “He shares many passions and interests that New Zealanders do.

“And I think that means that that relationship already exists. It’s a transition, but it’s not a jarring transition for New Zealand.”

Asked why she has said in the past that she believes the country will become a republic in her lifetime, she said: “I think even the Queen herself has observed and acknowledged the evolution over time in our relationships.

“My observation is that there will continue to be an evolution in our relationship. I don’t believe it will be quick or soon, but over the course of my lifetime.”

Pressed on how and when this might happen, she said: “We have complex arrangements, the Treaty of Waitangi – a very important founding document for Aotearoa, New Zealand, signed between Maori and the Crown.

“This is why it’s not a process I have any intent of instigating, but if and when it does occur, it will take time, and it will need to be very carefully worked through.”

Mr Albanese said now is not the right time to discuss whether his country may become a republic.

He was asked in a separate BBC interview when the question might arise again, with Australians having voted against the move in a referendum just before the turn of the century.

“I don’t think now’s the time to discuss those issues, and I have made that clear,” he said.

“This is a time in which we should acknowledge the life of service of Her Majesty Queen Elizabeth.”

He said the late monarch had a “close affinity” to Australia, always standing with its people at “times of difficulty”.

In addition to the UK, New Zealand and Australia, the King is head of state for 12 Commonwealth realms.

But the monarchy’s future role in some of the countries appears less certain with the start of a new reign.

The prime minister of Antigua and Barbuda, Gaston Browne, said after the Queen’s death that he would call for a referendum on the country becoming a republic within three years.

Jamaica is expected to follow Barbados, which became a republic in November 2021, although it remains within the Commonwealth.

Ms Ardern also reflected on her first meeting with the Queen, during which she asked how the late monarch managed being both a mother and a leader.

“Just get on with it”

The New Zealand prime minister, who was pregnant at the time of the exchange, said: “I asked her, for instance, of course what was one of the things on my mind alongside being a new prime minister was being a prime minister and a mum.

“I said to her: ‘How did you manage?’ And I remember she just said: ‘Well, you just get on with it’.

“And that was actually probably the best and most, I think, factual advice I could have. You do, you just take every day as it comes. And she did.

“But I have such respect for her because I see now what it takes to be a mum and a leader and she did it more times over than I.”

Mr Albanese also said in his BBC interview that he would be “very comfortable” with the King expressing views on the “importance of climate change”.

“And that’s why this issue shouldn’t be a partisan political issue. It should be an issue which the world needs to confront.”