A father and son’s bid to become the first in 50 years to cycle across the English Channel failed when the French REFUSED them permission to land. Andy Lang, 50, and son Bradley, 22, decided to undertake the 24-mile journey to raise money for Cancer Research following the death of friend Dominic Donoghue. They built […] 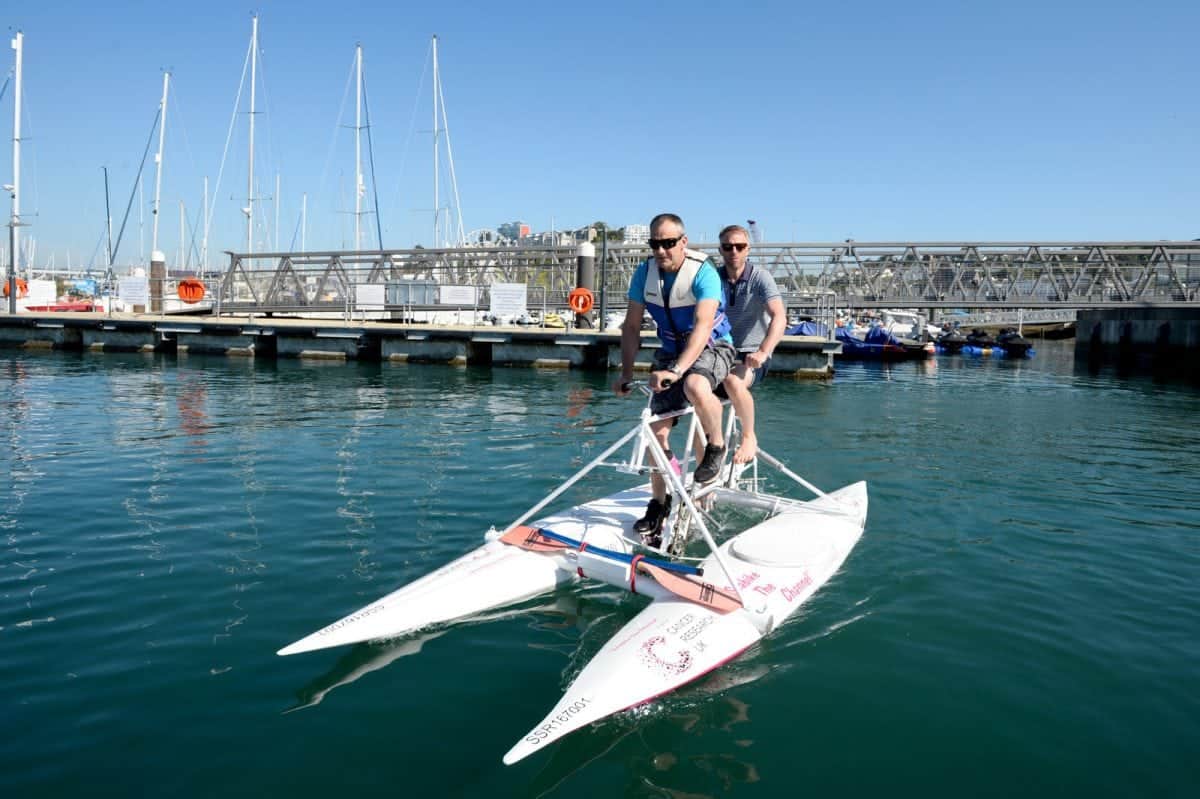 A father and son’s bid to become the first in 50 years to cycle across the English Channel failed when the French REFUSED them permission to land.

They built their own tandem ‘Seabike’ and tested it off the Devon coast it before setting off from Dover on Monday.

But halfway across, after 12 miles and four hours exhausting pedalling, they had to turn back because of a French law that bans ‘unorthodox vehicles’ from docking.

The 2013 rule prohibits man-powered vehicles from crossing to France.

It states that ‘unorthodox craft’ are ‘not adequate for deep-sea navigation in a heavy traffic area’, and won’t be able to proceed more than 300 metres from the French coast.

Father-of-two Andy, form Torquay, Devon, said it was a blow to them to find out they wouldn’t be allowed to complete the challenge.

He said: “We were hoping to get across, but we were almost sure it wouldn’t be a possibility, so we weren’t surprised.

“The French have a rule on unorthodox vehicles crossing the Channel, it means that anything human powered can’t get in – but a swimmer still can, which is weird.

“It’s more to do with bathtubs going across than Brexit.”

After realising they wouldn’t be allowed to complete the crossing, the pair turned back halfway and returned to the UK – still completing the full 22 mile distance.

Andy added: “It was really tough, the sea was really rough for the first hour.

“We didn’t realise it would take us seven hours, the physical side is very tough.

“Going past the shipping containers was very intimidating, the noise they made was incredible.

“The whole journey was amazing but very intimidating. It took us just over seven hours in total.

“We set off from Dover at 7am, I can’t remember looking at my watch when we arrived back at Folkestone, but it was definitely over seven hours.”

Andy, who runs his own business call PVC Fix with his wife Natalie, 51, and son, Alfie, 19, completed the crossing to raise money in memory of his close friend Dominic.

He added: “Dominic and I grew up together and he was a lifelong friend of mine.

“He had a tumour in his back and it spread. He fought it for six or seven months. When he died last year, people jumped at the chance to do something.

“We had to give the Seabike a name to register it, so it is now officially called Dominic which is lovely and it was very touching to say that Dominic was crossing the Channel.

“His widow is so pleased about it and finding it helpful which is very rewarding.”

The Channel has been successfully crossed by water bike previously, in the late 1800s and in 1967 before the French banned them.