"The consequences are going to be horrific. I think it’s entirely unsafe, entirely impractical for Priti Patel to suggest that we do pushbacks in the Channel.” 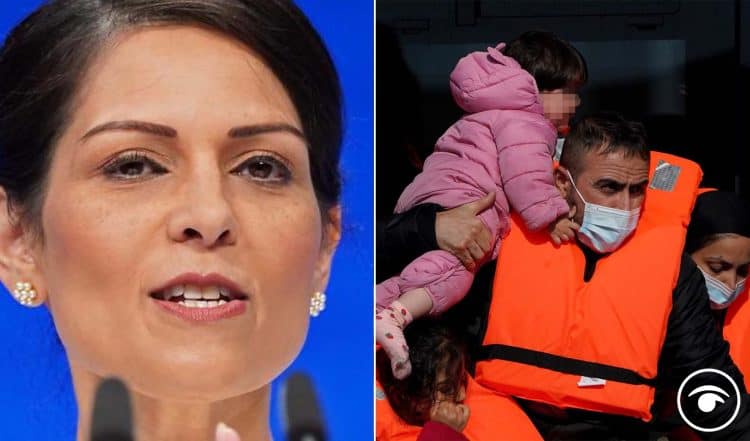 The UK has been urged to keep its word by a French minister who claimed none of the £54 million it promised France to help tackle migrant crossings has been paid.

Interior minister Gerald Darmanin said “not one euro has been paid”, following his visit to Dunkirk on Saturday.

Earlier this year, the Government pledged to send millions of pounds to support French efforts to stop the crossings.

However, Home Secretary Priti Patel recently threatened to withhold the funding unless more people were stopped from reaching the UK.

The call came as a charity which observes migrants arriving in small boats across the English Channel said the consequences of using controversial pushback tactics could be “horrific”.

Kim Bryan from Channel Rescue said in the last two weeks her group had spotted, from the cliffs of Dover, Border Force officials practising a pushback using jet-skis.

“What they seem to be doing is pushing the boat from the stern and from the bow, and I guess the idea is they’re going to push them back into French waters,” Ms Bryan told BBC Breakfast on Sunday.

“These boats are incredibly flimsy. Just the wash from jet-skis going around them in the first place could cause them to capsize.

“What we will be seeing, then, if this starts happening, is tragedy. The consequences are going to be horrific. I think it’s entirely unsafe, entirely impractical for Priti Patel to suggest that we do pushbacks in the Channel.”

The Home Office’s permanent secretary, Matthew Rycroft, last month said only a “small proportion” of boats could legally be turned back towards France using the tactics.

Mr Rycroft was also unable to tell the Commons Home Affairs Committee when, or if, the policy – instigated in a bid to tackle the number of crossings to the UK – would be put into practice.

More than 17,000 people have succeeded in making the dangerous trip across the Dover Strait aboard small boats in 2021, according to data compiled by the PA news agency.

“For now, not one euro has been paid,” Mr Darmanin told the Associated Press on Saturday.

“We are asking the British to keep their promises of financing because we are holding the border for them.”

He also called on Britain to take measures to reduce its “attractiveness” for migrants without residency papers, without elaborating.

“We are speaking of human beings. There are children, babies who are taking these boats, who are risking their lives. There are people who die in the Channel. I don’t what them to be hostage to political debates,” he said.

Meanwhile in Dover on Saturday, dozens of people were seen being brought ashore by Border Force after making the perilous crossing.

A woman was seen ushering a small child ahead of her as the pair were guided up a gangway by a border official.

It came after a large number of people are thought to have succeeded in reaching the UK on Friday.

The Home Office has yet to provide numbers on arrivals for Friday or Saturday.

A Home Office spokesman said: “This year record numbers of people have put their lives in the hands of ruthless people smugglers and risked perilous channel crossings from French beaches.

“Joint co-operation with the French has led to nearly 300 arrests, 65 convictions and prevented more than 13,500 crossings. But with hundreds still risking their lives and making the crossing, all sides must do more.”