Images of people queueing in the snow for food parcels from charity Kindness Homeless Street Team Glasgow earlier this week sparked an outcry on social media, with some comparing it to Eastern Europe under communist rule. 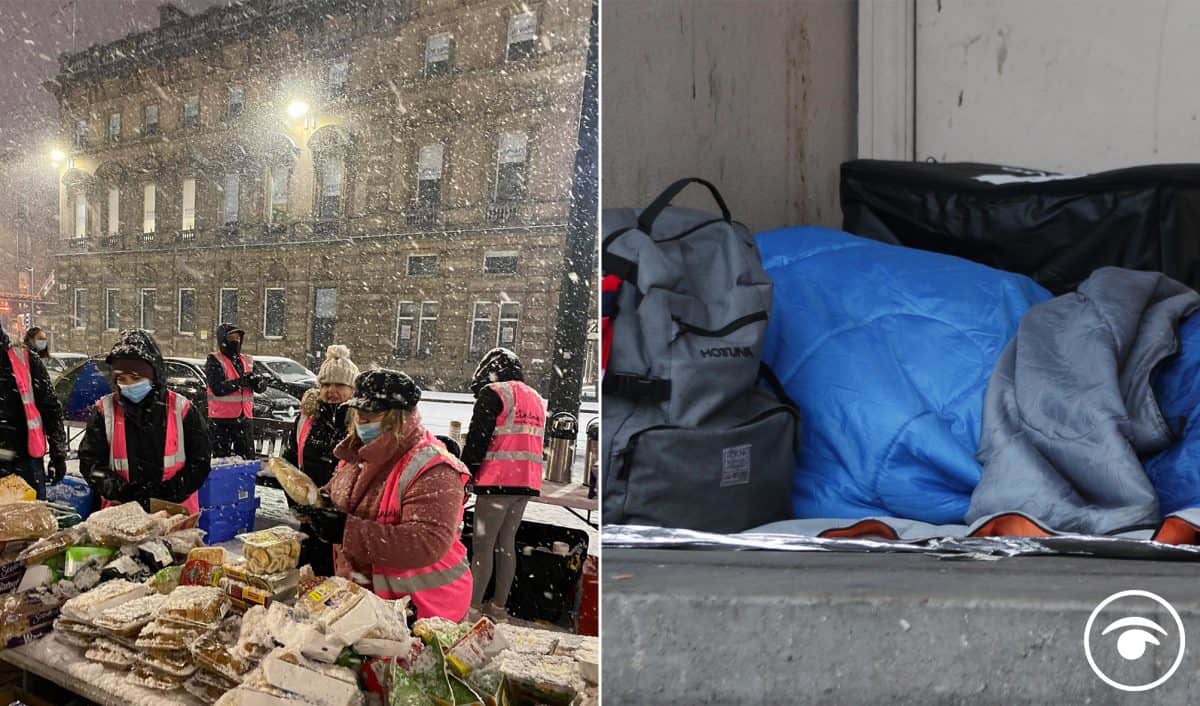 Showing rough sleepers a little kindness this winter could be the turning point to helping them off the streets, the head of one of the UK’s leading homelessness charities has said.

Shocking images of people queuing for food support during some of the coldest weather seen in Britain for a decade has prompted many to ask charities on social media what they can do to help.

Temperatures plunged to minus 23C (minus 9.4F) overnight into Thursday in Braemar, Aberdeenshire – the coldest temperature recorded in the UK since 1995.

Jon Sparkes, chief executive of Crisis, told the PA news agency: “If people feel confident enough to go up and try and talk to someone, my first piece of advice is ask them what they need.

“If you do decide to give someone money, do it good faith as one human being to another, and as a matter of kindness.”

He added: “The people I talk to often tell me that moment someone showed them some kindness was a real turning point for them.”

Mr Sparkes praised the Government’s Everyone In scheme, which was introduced in the first phase of lockdown to get people into secure accommodation.

But he urged ministers to signal “loud and clear” to local authorities that it is equally vital that everyone is off the streets in the current wave of the pandemic.

In London, 535 people were placed in Covid-19 emergency accommodation between October and December – a 58% drop on the previous quarter, according to data from the Combined Homelessness and Information Network (Chain).

“The Government needs to be very, very clear that we are still in a public health emergency situation,” Mr Sparkes said.

“When they use words like ‘everyone’, they need to mean everyone.”

Manchester-based Mad Dogs Homeless Project said a 25-year-old man had died last week after a “bitter cold night out on the streets”.

In a post on the initiative’s Facebook page, it said John Scott Wrench died on February 1 while rough sleeping on Market Street in Manchester.

The post said: “Shocking that a relatively fit young man who had been rough sleeping for a short time could be found dead!”

Images of people queueing in the snow for food parcels from charity Kindness Homeless Street Team Glasgow earlier this week sparked an outcry on social media, with some comparing it to Eastern Europe under communist rule.

The charity has asked anyone wishing to help to donate to its GoFundMe page.

Several homeless charities are sharing a five-step plan to help keep those sleeping rough safe as the cold snap continues.

Passers-by are urged to say hello and ask if they can do anything to help.

If an individual would like support, the public can help them contact StreetLink via their app or by visiting StreetLink.co.uk to arrange for them to be visited by an outreach worker.

Alternatively, search the Homeless Link Directory on Homeless.org.uk for nearby hostels, day centres and places serving free food and drink, or accommodation advice.

You can also offer food, drink, warm clothing and blankets.

Fiona Colley, director of social change at Homeless Link, a membership body for homeless charities in England, warned it is also important not to forget how vulnerable those on the streets are to the virus.

She urged the Government to ensure they are not overlooked in the vaccine drive.

Ms Colley said: “People experiencing homelessness are much more likely to have long-term health conditions, and already be old before their time, and being out in the cold, they are particularly vulnerable.

“More so than perhaps you and I would be for a single night because they are highly likely to have already to have serious health conditions.”

The exact number of people sleeping rough in the UK at any one time is unclear, although more than 30,000 people sought support from the Everyone In campaign.

A spokesman for the Ministry of Housing, Communities and Local Government said: “We’re providing over £700 million this year and £750 million next year to tackle homelessness and rough sleeping and so far have housed 33,000 people during the pandemic through our ongoing Everyone In initiative.

“Supported by our £10 million Cold Weather Fund, councils are working hard to ensure people who are at risk of sleeping rough are given shelter, and severe weather emergency protocols have been activated to protect those that are vulnerable.

“Backed by a further £10 million funding, we have asked all councils to redouble their efforts to help accommodate those sleeping rough and ensure they are registered with a GP, so they can receive vaccinations.”