Laurence Fox claimed he will be identifying as a "trans vegan" from this day forward. 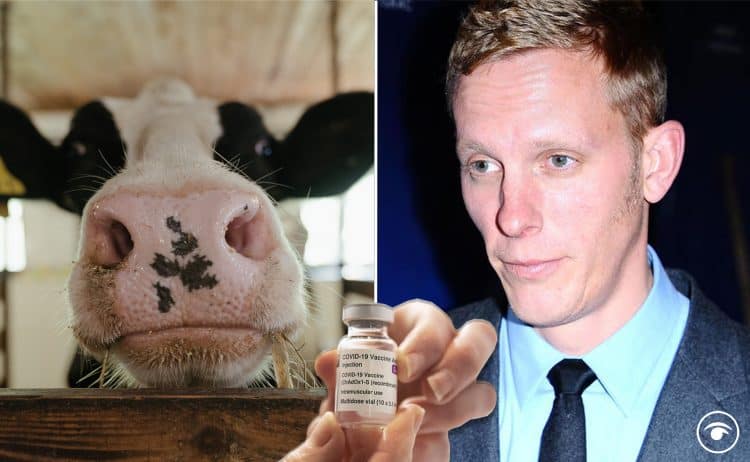 Anti-vaxxers are declaring themselves vegan on social media after a Daily Telegraph article claimed companies couldn’t force employees to have the Covid-19 jab if they abstained from animal products.

Following a 2020 tribunal that concluded ethical veganism was a protected status in the workplace, vegans are able to refuse the vaccine if it becomes necessary in workplaces based on the fact that it has been tested on animals in the UK and other countries.

At present, only a select few companies are requiring staff to be double vaccinated before returning to the office. However, more organisations are expected to follow suit.

News of vegans being exempt from having these vaccination regulations was met by tweets from a number of anti-vax conspiracy theorists, suggesting they’d become vegan in order to avoid having to get the vaccine.

The actor followed it up with another tweet stating: “I will only eat plant-based food and medium-rare sirloin steaks. And chicken, pork scratchings and salami.”

Actor Matthew Marsden also responded with a tweet stating: “I identify as a vegan”, in response to the news of compulsory workplace rules not applying to vegans.

Although the COVID-19 vaccines used in the UK are tested on animals, animal rights groups such as PETA have responded by encouraging all people, including vegans, to get the vaccine if eligible. While animal testing is condemned, it’s a legal requirement for passing vaccines in the UK.

“I’ll tell you why I’ve had both vaccines”

Speaking to Euronews, Dr Julia Baines, science policy adviser and author at PETA UK, said:  “As a scientist working to end animal testing and a vegan, I’ll tell you why I’ve had both COVID-19 vaccines. While science is changing, we still live in a world in which companies that make medicines, including vaccines, are required by government agencies to conduct certain tests on animals before they can market their products.”

On the COVID-19 vaccines, Dr Julia Baines added: “The goal of being vegan and advocating for animal rights is to bring about positive changes for animals. As long as tests on animals are a legal requirement, refusing to take a medicine on ethical grounds will not help the animals who have already been used in tests or spare any the same fate in the future.”

Unlike advice from anti-vaxxers, guidance from certain animal rights activists encourages preventing animals from suffering and humans from contracting the virus by getting vaccinated, then going vegan (not just for social media).