A swift transatlantic FTA was repeatedly trumpeted by Leave campaigners, including Mr Johnson, as the biggest prize from Brexit. 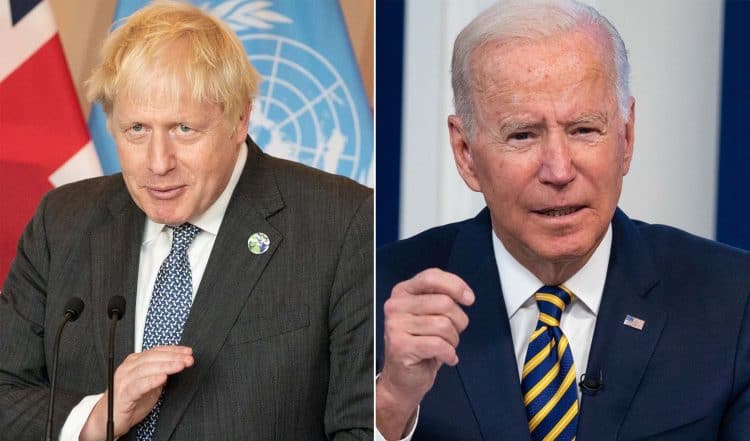 The PM has accepted that the UK will not get a quick trade deal with the US, in an embarrassing admission as he prepares for his first White House meeting with Joe Biden.

Johnson made clear that he recognised a free trade agreement (FTA) with Britain was not a priority for Mr Biden, who he said had “a lot of fish to fry”.

A quick FTA was repeatedly heralded by Leave campaigners, including the PM, as one of the biggest prizes from leaving the EU. Johnson made clear on his arrival in Downing Street in 2019 that he was hopeful of a quick deal on tariff-free commerce with Donald Trump. That has all changed with the new President, already angered by Brexiut’s effect on the issue of Ireland.

It is a stark reminder of former president Barack Obama’s 2016 warning that a vote for Brexit in that year’s referendum would put the UK to “the back of the queue” in seeking a deal, which seems to have come true.

“On the FTA, the reality is that Joe has a lot of fish to fry,” said Johnson. “He’s got a huge infrastructure package, he’s got a ‘build back better’ package.

“We want to do it, but what we want is a good FTA, a great FTA. And I have quite a lot of experience of American negotiations, and they are pretty ruthless, the American negotiators. And I would much rather get a deal that really works for the UK than get a quick deal.”

Boris Johnson has insisted “we are not counting our chickens” over hopes Joe Biden could make a major commitment that would spur on a financing drive to tackle the climate crisis.

The Prime Minister said it would “send a massively powerful signal” if the US president announces extra support to help hit a target of giving 100 billion dollars (£73 billion) a year to support developing nations to cut emissions.

Mr Johnson had earlier downplayed the prospects of reaching the figure by the Cop26 summit he is hosting in November, but ministers appeared hopeful that Mr Biden could spur things on during his speech at the United Nations on Tuesday.

US climate envoy John Kerry had suggested the 100 billion dollar target will be met, hinting that Mr Biden could announce more money.

But, speaking to reporters at the UN on Monday, Mr Johnson said: “We have been here before. We have all heard lots of pledges and positive noises.

“We are not counting our chickens here.”

Asked if it could be a game-changer if Mr Biden adds more funds, the Prime Minister said: “It will make a huge difference.

“It will send a massively powerful signal to the world, the developing countries, that we in the industrialised West really do take it seriously and we really are willing to step up to the plate and help them.”

Cop26 President Alok Sharma appeared positive about the prospects of making a stride towards the target after hearing from Mr Kerry.

“Certainly a good announcement from the US will make a big difference in terms of getting us over the line,” the minister told reporters.

During discussions Mr Johnson hosted alongside UN Secretary-General Antonio Guterres, the Prime Minister told world leaders including Mr Kerry he is growing “increasingly frustrated” that their commitments to the crisis are “nowhere near enough”.

He said the gap between what industrialised nations have promised and what they are actually delivering remains “vast”.

And Mr Johnson urged them to redouble their efforts to hit the financing pledge, saying: “Too many major economies – some represented here today, some absent – are lagging too far behind.

“When the summit ends, when most of the world has committed to decisive, game-changing action, it will be clear to all which of us has lacked the courage to step up.

“The world will see, and your people will remember, and history will judge.

“So you can look away, you can do the minimum, you can hope that if you feed the crocodile enough it will devour you last. Or you can show leadership.”

On Sunday Mr Johnson conceded there is only a “six out of 10” chance of hitting the 100 billion dollar target before the the Cop26 climate summit in Glasgow.

But, in New York, Mr Kerry told Sky News: “I think we’re going to get it done by Cop and the US will do its part.”

Asked if Mr Biden will announce more funds this week, the former US secretary of state added: “I’m not hoping… I’m telling you to stay tuned into the president’s speech and we’ll see where we are.”

Mr Johnson congratulated Mr Bezos, one of the world’s richest men, on his efforts to protect the environment, adding: “Amazon is coming to the rescue of the Amazon.”