It comes as the Texas attorney general Ken Paxton has called for teachers to be armed after the massacre in Uvalde. 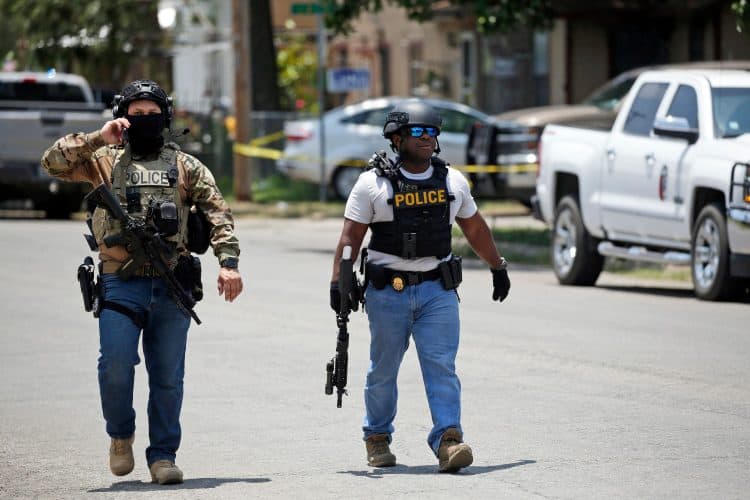 The latest figures come from Travis Considine, a spokesman for the Texas Department of Public Safety. The gunman also died.

Authorities offered no names or descriptions of the two adults.

It was the deadliest shooting at a US grade school since a gunman killed 20 children and six adults at Sandy Hook Elementary in Newtown, Connecticut, almost a decade ago.

On Twitter, people struggled to come to terms with the scale of death and destruction wreaked by gun-toting killers in the US.

One woman called Aparna wrote: “199 mass shootings so far this year. That’s an average of 10 shootings every single week. Cue the empty posturing and hollow condolences from the powers that be. Sickening.”

James Shepard added: “There have been 199 mass shootings in the US in 2022. There have been 27 school shootings. There have only been 144 days this year. My heart is broken for so many people that I will never know. Enough is enough.”

Others called it an epidemic in its own right. Stephen Froude wrote: “199 mass shootings in America already this year with just over 19 weeks into the year. Which averages to about 10 attacks a week… now tell me there isn’t an epidemic of gun violence in America.”

But not everyone was in favour of stricter controls.

The Texas attorney general spoke on Newsmax in the middle of campaigning in a runoff primary against Land Commissioner George P Bush where polls close Tuesday evening.

Mr Paxton proposed having “one point of entry” at schools to make it more difficult for shooters to enter a school, as well as arming teachers and “potentially other administrators”.

Later on Fox News, Mr Paxton pushed back on the idea that there should be more laws to restrict gun ownership.

“We can’t stop bad people from doing bad things,” he said. “If they violate murder laws, they’re not going to follow gun laws. I never understood that argument.”

He later reiterated his point about arming teachers.

Related: America, what is it going to take? Reaction as tragedy unfolds in the States once again