It is thought to be the oldest discovered pollinator of the first flowers. 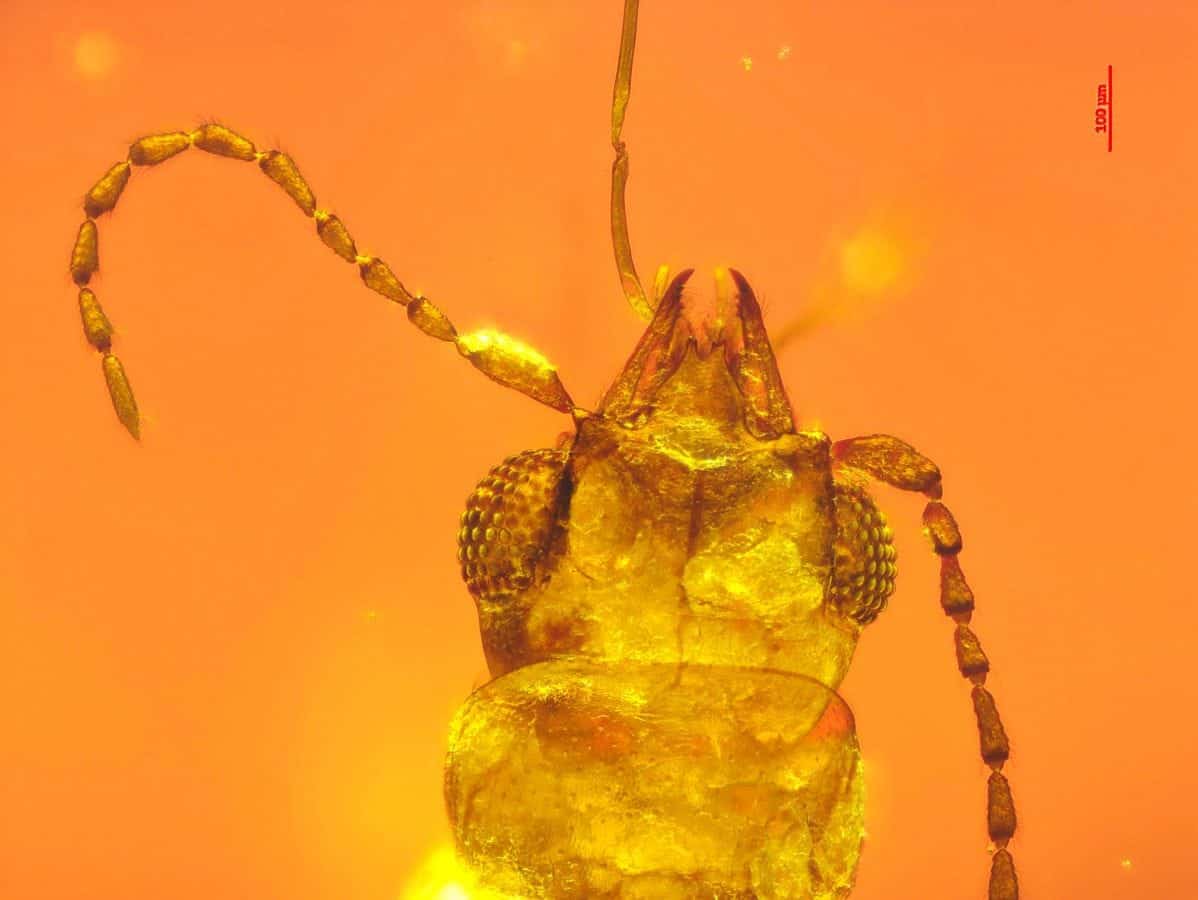 These amazing pictures show a 99 million year old beetle trapped in amber, believed to be the world’s earliest insect pollinator of the first flowers.

Its body was coated with pollen grains when it became encased in the clear tree resin, the superglue of the fossil record. It sets hard and fossilises remains over time.

The creature would have been crawling over plants for nourishment when it was frozen in time during the Cretaceous, while T Rex was roaming the Earth.

It has been preserved in astonishing detail – even revealing specially adapted cavities in its jaws that it used to transport the pollen.

Dr Chenyang Cai, a research fellow at the University of Bristol, said: “It is remarkable several aggregations of exquisitely preserved pollen grains are located along the left side of the fossil beetle and with two pollen grains close to the head.”

Named Cretoparacucujus cycadopholis – or ‘lover of cycads’ – it had an unusually large head, big eyes, sharp claws and huge antennae.

The creepy crawly belongs to a family of beetles known as boganiids and had been pollinating the world’s oldest seed plants, called cycads.

These primitive evergreens resemble palms and have been around for 300 million years but are now among the most threatened on Earth.

Dr Chenyang Cai, a research fellow at the University of Bristol, said: “Boganiid beetles have been ancient pollinators for cycads since the age of cycads and dinosaurs.”

The finding suggests they could have been pollinating plants for 200 million years – much longer than previously thought.

Dr Cai said: “Our find indicates a probable ancient origin of beetle pollination of cycads at least in the Early Jurassic, long before angiosperm dominance and the radiation of flowering-plant pollinators, such as bees, later in the Cretaceous.”

Beetles were among the first insects to visit flowers, tens of millions of years before bees or butterflies appeared.

They remain essential pollinators today, especially for ancient species such as magnolias and spicebush.

Flowering plants, or angiosperms, are well known for their special relationship with insects and other pollinating animals.

But cycads are gymnosperms that have no flowers or fruits and were on the scene long before.

They may have been the first insect-pollinated plants – and the beetle described in Current Biology is the earliest definitive fossil evidence.

The most impressive feature of Cretoparacucujus is the big head with a powerful lower jaw that jutted out, massive compound eyes, sharp claws and extremely long antennae.

Dr Cai explained: “These features probably suggest an open habitat, and most likely habitation on the surface of gymnosperms.”

The beetle was unearthed at a fossil site in the town of Tanai in northern Myanmar which has become a treasure trove of prehistoric insects and vertebrates during the past 20 years. 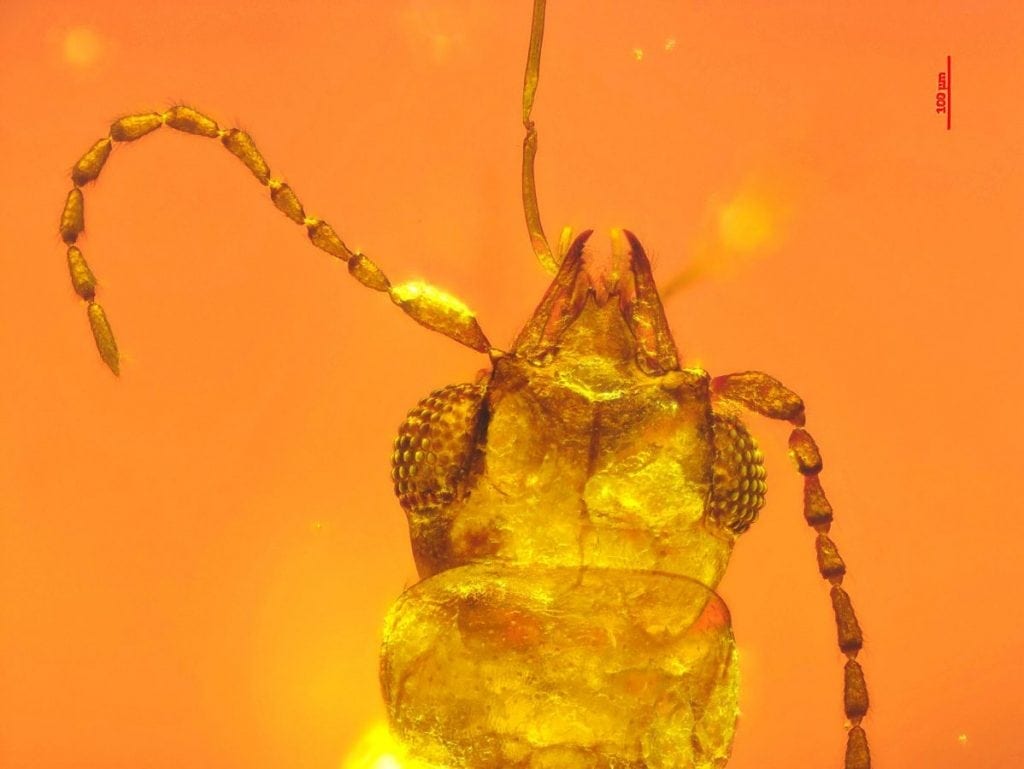 Added Dr Cai: “Our discovery indicates a probable ancient origin of beetle pollination of cycads at least in the Early Jurassic, long before angiosperm dominance and the radiation of flowering-plant pollinators later in the Cretaceous.”

The Early Jurassic is a geological period that spans from 201.3 to 174.1 million years ago.

When his supervisor Professor Diying Huang at the Chinese Academy of Sciences at Nanjing where Dr cai was based at the time first showed him the beetle, he was immediately intrigued.

He recognised its large jaws with bristly cavities might suggest the beetle was a pollinator of cycads.

After cutting, trimming, and polishing the specimen to get a better look under a microscope, his excitement only grew.

The beetle carried several clumps of tiny pollen grains. Dr Cai consulted Dr Liqin Li, an expert in ancient pollen, who confirmed that the pollen grains belonged to a cycad.

This suggested the fossilised beetle belonged to a sister group to the Australian Paracucujus, which pollinates the relic cycad Macrozamia riedlei today.

Beetles commonly pollinate cycads in South Africa and Australia – supporting an ancient origin of the relationship, say the researchers.

The findings together with the distribution of modern boganiid beetles lead Dr cai to suspect similar beetle pollinators of cycads are yet to be found.

He’s been looking for them for the last five years. The challenge, he says, is that older Jurassic beetles are generally found as compression fossils not trapped in amber.

Beetles will eat their way through petals and other floral parts. They even defecate within flowers, earning them the nickname “mess and soil” pollinators. Research has shown that beetles are capable of colour-vision.

Today, most flowering plants, including many food crops, could not reproduce without the insect transport of pollen.

Cycads today they face a risk of extinction four times greater than the average for plants.

One of the worst threats comes from the trade in wild plants for the horticultural trade.