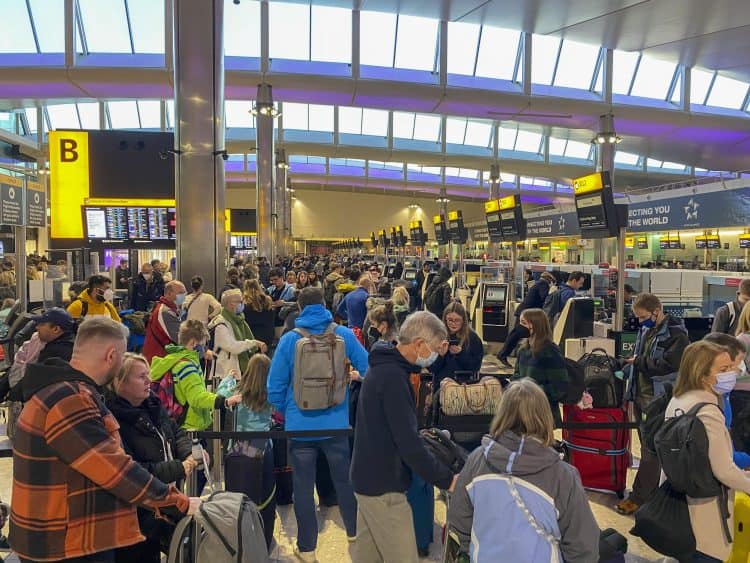 Heathrow Airport has introduced a cap on passenger numbers this summer as the aviation sector struggles to cope with demand for travel.

No more than 100,000 daily passengers will be able to depart from July 12 until September 11, the west London airport announced.

Airlines planned to operate flights with a daily capacity averaging 104,000 seats over that period, according to Heathrow.

The airport said it has ordered airlines to “stop selling summer tickets to limit the impact on passengers”.

The measure will lead to more cancellations on top of the thousands of flights axed in recent months.

Discussing the issue on LBC, Kully Sandhu, managing director of the Aviation Recruitment Network, told Shelagh Fogarty that Brexit is largely to blame for the issues airports are facing.

“We’re not allowed to have individuals applying from Europe unless they’ve got the right to work in the UK freely”, he said.

“At this time we’re not allowed to recruit individuals from Europe.

“We are only relying on individuals who already had the right to work in the UK pre-Brexit and UK citizens.

“The challenge is now we’ve come into a situation where not only Brexit has taken place, but we’ve lost a large amount of skillsets from the aviation industry to non-airport businesses.”

He replied: “It is a big issue, certainly within the hospitality industry.

“If you’re explaining to an individual we want to give you a job but it can take up to 6, 7, 8 weeks to security clear you, they want to be working now not in 8, 9 weeks’ time.”

Earlier this month Michael O’Leary, boss of Ryanair, said airport disruption over this summer is “completely to do with Brexit”.

He added: “This government couldn’t run a sweet shop.”