"During a cost of living crisis, she’d cut fundamental support because she has no idea about the range of very real circumstances that makes it absolutely necessary for so many." 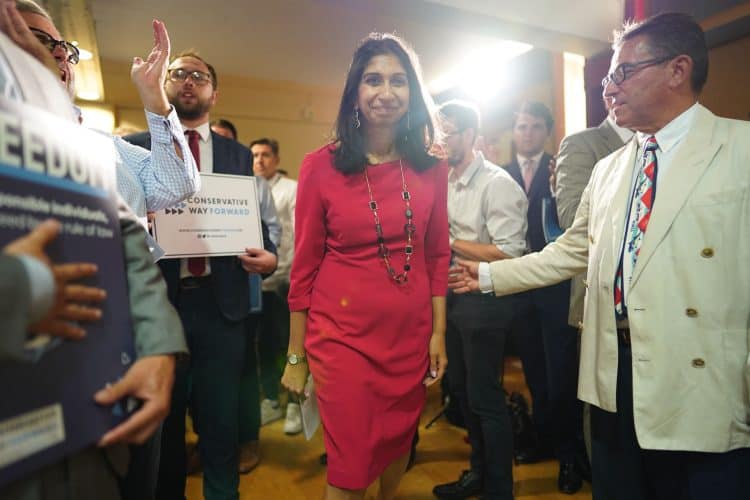 Tory leadership hopeful Suella Braverman has vowed to tackle “stubborn” working-age people who “refuse” to get jobs to help cut the cost of Government and fund a “radical” plan to slash taxes.

To cut spending, she set out long-term public service reforms – but also pledged to tackle “multibillion-pound wastage” in the way taxpayers’ money is used.

She told the PA news agency: “In so many areas we are spending too much in an inefficient way.”

That included looking at the “size of government department budgets”, she said.

But she insisted spending could be cut without dramatically reducing public services.

She added: “It’s about spending money more smartly and I think we waste too much money.

“I think there are too many people in this country, for example, who are of working age, of good health and who are choosing not to work full time and they are taking benefits.

“Whilst universal credit did a very good amount of work to stamp out that welfare dependency, we still have a stubborn tail of the population that refuses to enter into economy activity.

“I think we have to introduce much more rigour and incentive to get people into work.”

She pointed to “unsustainable demand” on services and an “ageing population putting strain on the NHS and social care sector” as examples of why reforms – such as improved access to primary care to reduce pressure on hospitals – were needed.

Ms Braverman has also pledged to take the UK out of the European Convention on Human Rights (ECHR).

She rejected the suggestion that would put the UK in line with Russia – which was booted out of the Council of Europe over the war in Ukraine and subsequently voted, symbolically, to withdraw from the ECHR.

“No, it would put us in line with countries like New Zealand and Canada and Australia and many other Western democracies who function perfectly well without being members of the European Convention on Human Rights,” she said.

“That is not the source of our rights and our civil liberties in this country. Britain was very competent and able and indeed exemplary in protecting rights, in safeguarding liberties, many centuries before the European Convention on Human Rights came along.

“No longer fit for purpose”

Speaking at the Churchill War Rooms, she said the ECHR was drawn up for a post-Second World War world and was “no longer fit for purpose”.

An interim ruling by judges at the European Court of Human Rights, which interprets the convention, blocked plans to send some asylum seekers to Rwanda.

Ms Braverman said:  “It’s acting as a constraint on our powers when it comes to controlling our borders, for example, when it comes to a whole range of things that individuals want to do in our society.”

In a speech to the Thatcherite Conservative Way Forward group, she took aim at leadership rival Rishi Sunak, the former chancellor who has played down the prospect of imminent tax cuts, and warned colleagues against telling “comforting fairytales” about the nation’s finances.

Ms Braverman hit out at “timidity” and the “moderate centre way”, adding: “They say that the tax burden is too high and that cutting taxes too quickly is not the serious thing to do. But in a cost of living crisis with spiralling costs. We know there is no alternative.”