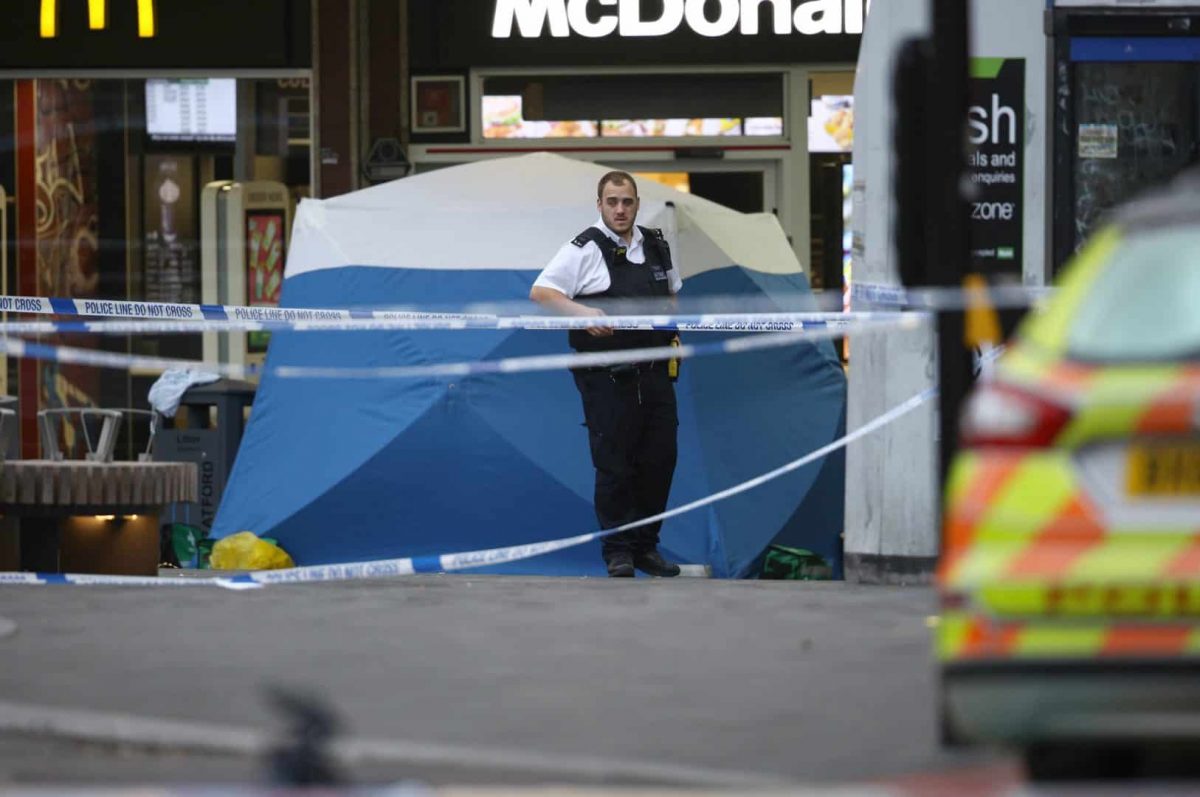 A 15-year-old boy has been arrested on suspicion of stabbing a schoolboy to death outside a busy shopping centre in broad daylight, Scotland Yard said.

Officers were called to Broadway in Stratford, east London, shortly after 3pm on Thursday following reports of a stabbing.

The schoolboy, who police named on Friday as 15-year-old Baptista Adjei, from North Woolwich, was attacked on or after getting off a bus which had stopped close to the Stratford Shopping Centre.

Police said a 15-year-old boy who handed himself in to an east London police station on Friday was arrested on suspicion of murder.

He remains in custody.

Police and witnesses said the teenager’s friends and passers-by rushed to help after he was knifed outside a McDonald’s at the shopping centre.

But police and paramedics found him with “critical injuries” and, despite battling to save his life, he was pronounced dead at the scene at 3.49pm.

“He was a nice boy, the fact that he died in his school uniform is horrific.”

Baptista’s aunt, Aretha Adjei, told the Evening Standard that her nephew was a “fun-loving boy, very popular with everyone in church”, who would “always make you laugh”.

She added: “He was a nice boy, the fact that he died in his school uniform is horrific.

“He had just finished school. He spoke to his mum on the phone about coming home after popping in to McDonald’s with a friend. Twenty minutes later he was stabbed to death.

“His mother is not coping well. She only has two children. You can’t imagine her pain. She keeps saying how she should have gone and picked him up.

“He was a fun-loving boy, very popular with everyone in church, everyone in the street knew him. He would come and put his arms around you. He would always make you laugh.

“No-one could say a bad word about him, he would never join a gang or a group. That’s not him.”

It added: “Dark moment at Mindset as one of our former players from the U16s last season went to sleep today at Stratford due to knife crime.

“All of us at Mindset have the family in our thoughts and prayers. RIP Bap.”

Five hours later, officers were called to the Brandon Estate in Camberwell, south London, where they found an 18-year-old man with stab wounds who died an hour later.

Police said the teenager had been chased by a group of men who then set upon him on the ground, inflicting fatal injuries.

A forensics tent could be seen on grass on Grimsel Path on Friday afternoon, with a number of police officers still patrolling the area.

London Mayor Sadiq Khan has said he was “devastated” by the two fatal stabbings and urged witnesses to come forward, saying: “There is no honour in staying silent.”

One witness described the scene in Stratford after Baptista was stabbed to the PA news agency.

They said: “At that moment there were not many people around him so I could see him all covered in blood. He was in pain and tried getting up.

“There were people around, gathering. It was scary as you did not know if any of them could have had a knife too.”

A second boy, aged 15, was also found with stab injuries and was taken to an east London hospital, where his injuries were said to be not life-threatening.

Mr Khan said: “I am utterly devastated to hear that two teenagers have been killed on our streets – a 15-year-old boy in Stratford and an 18-year-old man in Southwark.

“My thoughts are with both victims’ loved ones at this incredibly difficult time.

“Knife crime is stealing the futures of our young people – and it is devastating our communities. It has to stop. That’s why, despite the backdrop of vast government cuts, we’re funding dedicated officers on our streets to tackle violence – as well as focusing on addressing the causes of crime, investing in youth and preventative services.”