The suspect was arrested on suspicion of the commission, preparation and instigation of an act of terrorism at Manchester’s Arndale Centre. 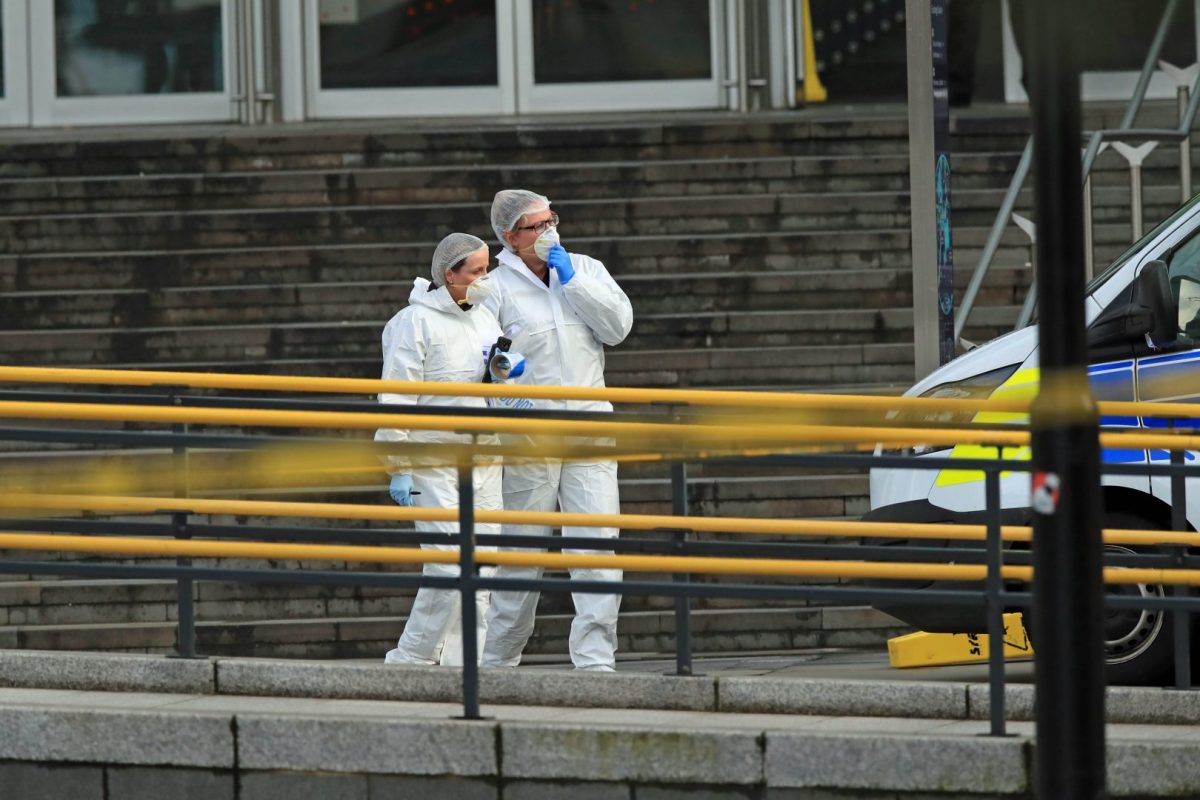 A knifeman who stabbed three people at a Manchester shopping centre has been arrested on suspicion of terrorism, Greater Manchester Police have said.

Police were called to the Arndale Centre at 11.15am on Friday to reports of a stabbing.

The 41-year-old suspect was detained and three people were taken to hospital with stab injuries and two others were hurt.

Witnesses described a scene of terror as shoppers, some with injuries, sought refuge in stores.

Officers from Counter Terrorism Police North West were called in to investigate, and at around 3.15pm, Greater Manchester Police Assistant Chief Constable Russ Jackson said the suspect had been arrested on suspicion of the commission, preparation and instigation of an act of terrorism.

He added that investigators did not believe anyone else to be involved in the attack.

The suspect was first arrested on suspicion of a serious assault, the force said.

Mr Jackson said the suspect had been armed with a large knife as he entered the Exchange Court of the shopping centre where he “lunged” at shoppers.

He said the first to intervene were two unarmed police community support officers who had been nearby, and who tried to confront the attacker who then chased them with a knife as they called for assistance.

He added: “Other officers both armed and unarmed quickly responded and within five minutes he was challenged and detained by armed officers on Market Street outside the Arndale Centre.

“We do not know the motivation for this terrible attack. It appears random, is certainly brutal and of course extremely frightening for anyone who witnessed it.”

Mr Jackson said the incident was “bound to bring back memories of the awful events of 2017”.

He added: “Although the injuries are nasty, we are told that, thankfully, none are life-threatening.”

He said the force had increased patrols in the area, but added: “We do not believe there is a wider threat at this time and we are hoping to return the city to normality by tomorrow morning.”

Mr Jackson called on anyone who may have been present to send any images or footage they have taken to the GMP website.

The force said there were initially four people believed to be injured but another woman had since presented at hospital with a superficial wound.

A 19-year-old woman and another woman for whom no age was given were both taken to hospital with stab injuries and their condition was described as stable by the force.

A man in his 50s was also taken to hospital with stab wounds, while a woman in her 40s was treated by paramedics at the scene but was not stabbed.

North West Ambulance Service (NWAS) said one patient had suffered “serious” injuries adding that it had been stood down from the incident at 1.56pm.

One shop worker, who gave his name only as Jordan, 23, told the PA news agency: “A man was running around with a knife lunging at multiple people, one of which came into my store visibly shaken with a small graze.

“Soon after, security staff told all retail staff to close their doors and move the public to the back of the stores.”

Freddie Houlder, 22, from Market Drayton, was in the centre when he heard “a load of screams just outside” the shop he was in.

Mr Houlder added: “Luckily she had quite a thick jacket – she thought originally it was a fake knife because of how easily it grazed off but police came in and said it was a real knife and she burst in to tears.”

He said he was evacuated several minutes later, at which point he saw “a bunch of curtains covering someone seriously injured or dead, I don’t know”.

“I definitely don’t think it was gang violence because this guy was going around trying to stab random people, I believe.”

A member of the Malone family, who frequently appear on Channel 4’s Gogglebox, was also caught up in the incident.

Someone tweeted from the Gogglebox Malones’ account that they had been evacuated from the centre.

Members of the Malone family to appear on the show are parents Julie and Tom Snr and their sons Tom Jr and Shaun.

Tom and Julie Malone also have two other children and two grandchildren.

One of them posted: “A big thank you to all MCR Arndale security and the police who attended so quickly x

“Prayers to those that have been hurt, I’m just sat outside the city centre shaking a little bit and hugging my grandkids.”

Prime Minister Boris Johnson said he was “shocked by the incident and my thoughts are with the injured and all those affected”.

“Our thoughts are with the five people injured.

“The scene has been secured and all emergency services are engaged in ensuring public safety – the investigation is ongoing.”

The Arndale Centre is just a few hundred yards from the Manchester Arena and Victoria railway station – both of which have been the scene of recent terror attacks.

Twenty-two people were killed in May 2017 when Salman Abedi detonated a suicide bomb in the Manchester Arena following an Ariane Grande concert – the youngest victim was just eight years old.

Last New Year’s Eve, three people including a police officer were seriously injured after a 25-year-old man launched a knife attack on passers-by.

He was arrested on suspicion of attempted murder and will face trial in November.

In 1996, the Arndale Centre was damaged in a major bomb attack by the IRA in which a 1,500-kilograms device loaded on a lorry was detonated on Corporation Street.

More than 200 people were injured in the explosion, although there were no fatalities.