Adam Delves, 38, was left badly injured and has been unable to work since being tossed into the air by the angry 14-strong herd 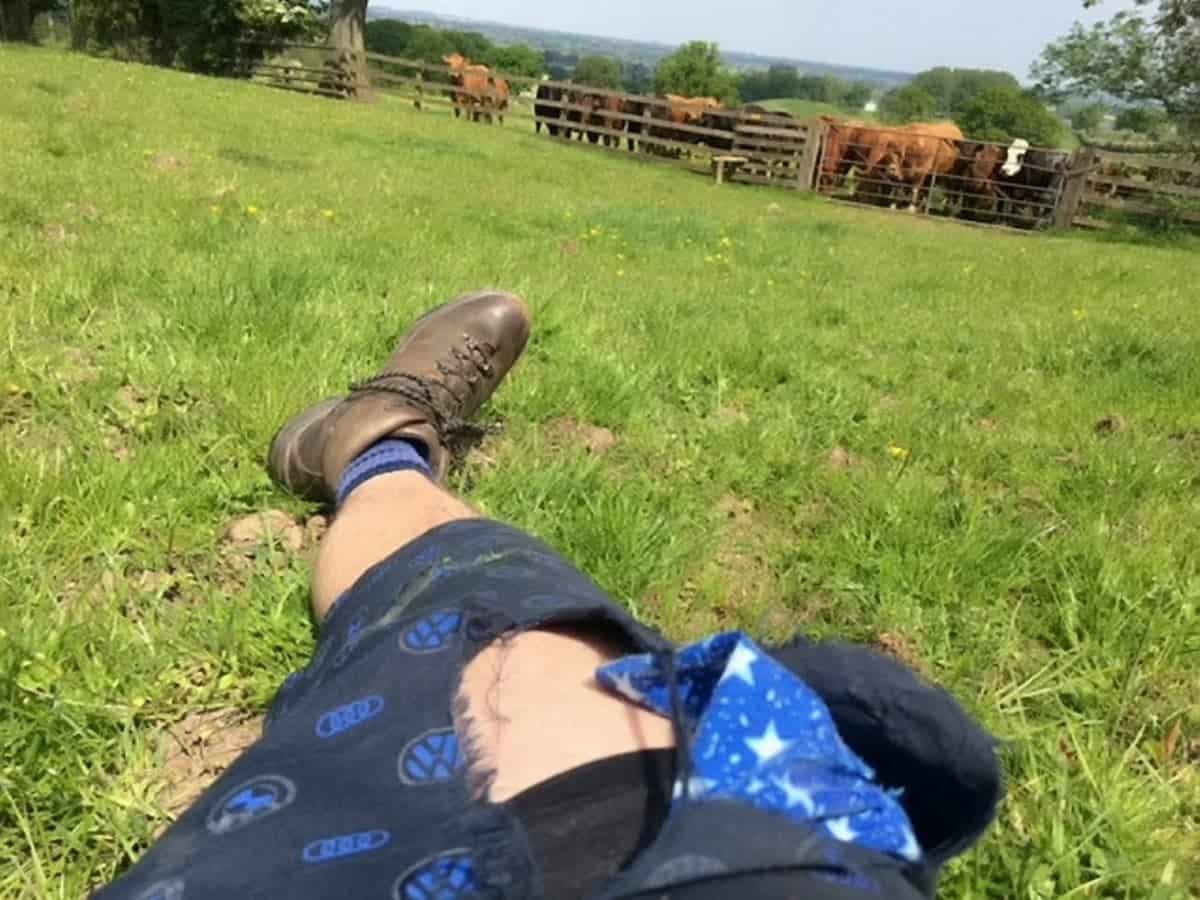 A taxi driver has described how he almost died after being trampled by an angry herd of rampaging cows as he was out walking his dog.

Adam Delves, 38, was left badly injured after he was repeatedly stamped on and tossed into the air by the stampeding animals on a public pathway.

He had been walking his pet pooch Lexi between two fields near the South Cheshire Walkway near Wirswall on the Cheshire/Shropshire border when he was attacked.

A group of around 14 cows and bullocks suddenly charged without warning and
smashed him into a nearby metal fence.

The one-tonne animals then kicked and stamped on him before he was thrown at least 5ft (1.5m) through the air back into a neighbouring field.

He has been left unable to work as a result of agonising back, arm, leg and ankle injuries he suffered during the terrifying attack.

Adam, a self-employed cab driver, from Buckley, north east Wales, said he thought he was going to die when the animals struck at Wicksted Old Hall farm.

He had left his dog in one field while he crossed a style into another and believes the animals became aggressive because they were protecting suckling calves. 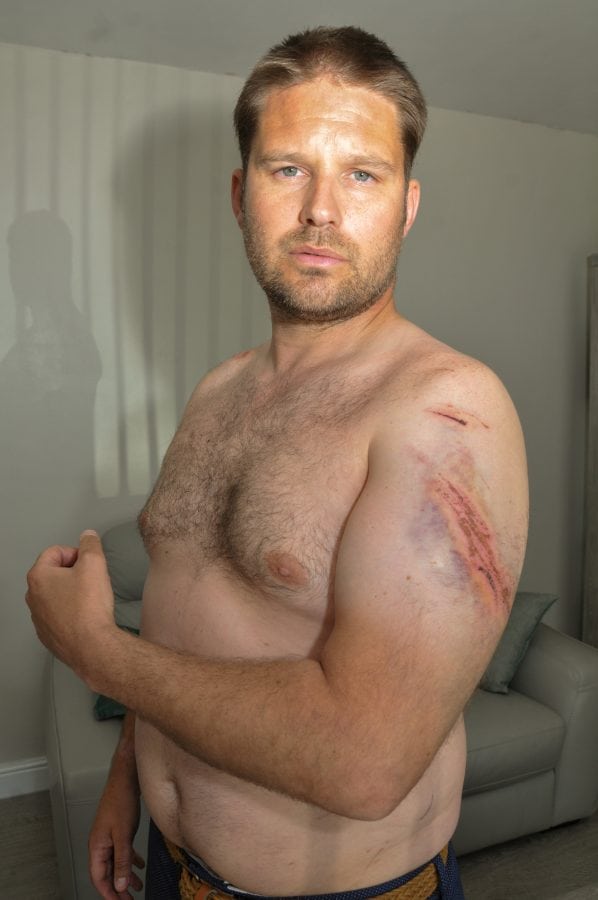 He added: “I was quite quickly approached by a herd of cows and bullocks.

“Normally you can shout or clap your hands to get them to go away – that normally does it. In this instant they were not moving.

“I was stood still when one lifted me in the air and knocked me back into the fence. I thought ‘I had better get out of here’.

“I walked back to the style but by this time I was covered by cows – they absolutely rammed me. I don’t know how long it went on. It was very violent.

“It was a blur of hooves and I was just trying to cover my head. They were really going for it.

“I thought that was the end of me.”

Mr Delves lost his glasses and his watch during the stampede and was left with torn clothes.

He added: “One must have got on its back legs and kicked its hooves at me.

“I was knocked to the floor and was trying to get away from the metal fence – I thought ‘they will crush me to death’.

“What saved me was I got launched in the air. I landed on the fence and went over to the other side. I was free.

“If they had not knocked me over the fence, I don’t know whether I would have survived to tell the tale.

“When I came round I was so shook up. I was still pretty scared. I crawled away from the gate.”

It was at this point Mr Delves snapped a picture of the cows gathering at the fence in the field he had just escaped. 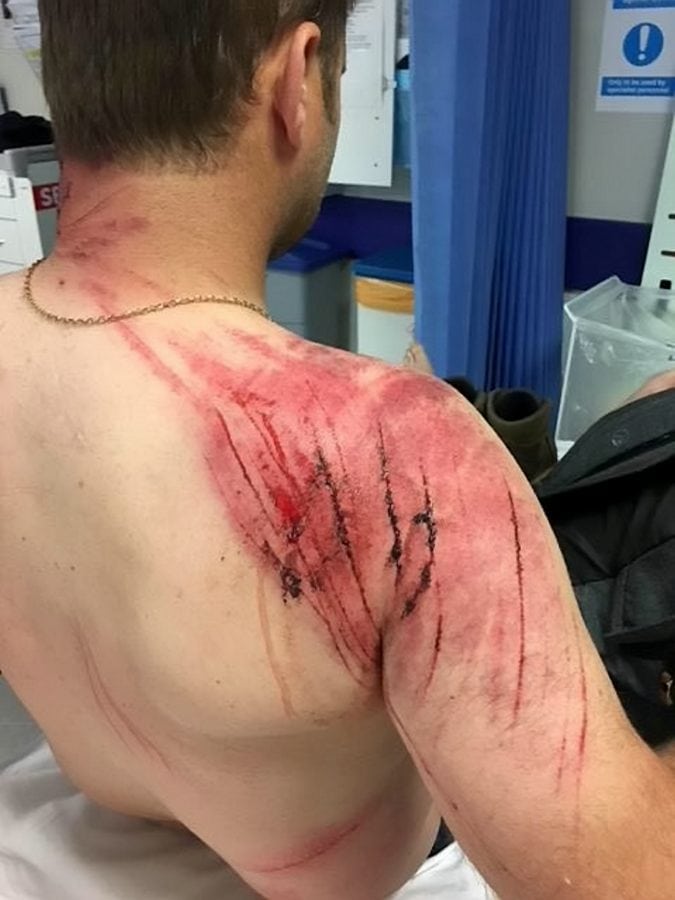 He said: “They were still snorting at me – one tried to ram the gates. I crawled away and phoned for an ambulance.”

Both an air and land ambulance arrived to take Adam to Leighton Hospital in Crewe where he was given a scan to check for organ and spine damage.

Luckily he avoided any permanent injuries but was diagnosed with nerve damage to one of his legs.

He said: “Luckily I am a fit young lad – I am quite a strong lad. If it had been a younger or older person they could have been done for.”

Since the incident on May 19, Mr Delves was signed off work for two weeks by a doctor – but as he is self-employed he will not be paid for this time.

He had not walked along that footpath before, and has said he can’t understand why the cows weren’t cordoned off during suckling season.

He said: “I certainly won’t be going near any cows in future, that’s for sure.

“I am in absolute agony. I literally can’t move out of bed without taking pain killers.

“I can just about dress myself now. But the first week was absolutely horrendous and I needed help from my friends and parents.

“I can’t work and I’ve been forced to cancel a holiday to Croatia but I won’t get any money back and I’m not earning either.

“Its just been horrendous.”

Figures from the Health and Safety Executive (HSE) showed 74 people had been killed by cows between 2000 and 2015.

The HSE has issued advice to farmers not to put calves and their mothers in fields accessible to the public.

Oliver Cartwright, from the National Farmers Union, said: “The countryside is a fantastic place to walk in and enjoy. However, we must remember it is a working environment where animals graze.

“So it’s important to take care and be mindful of your surroundings so you can fully enjoy the experience.

“We work with the ramblers, Kennel Club and others to offer sound advice to the public and we would encourage people to always follow the countryside code.

“We would encourage walkers to keep dogs on a short lead when walking in fields with livestock.

“Farmers are also aware of their responsibilities and they take these seriously.”