If you’ve been anywhere near Battersea Power Station in the last twelve months, you’ll have noticed that its iconic towers have become a hive of activity, lined with cranes and construction vehicles as redevelopment gets underway in earnest. It’s been an insurmountable project for countless investors over the last fifty years, but it finally looks […]

by Sam Allcock
in News 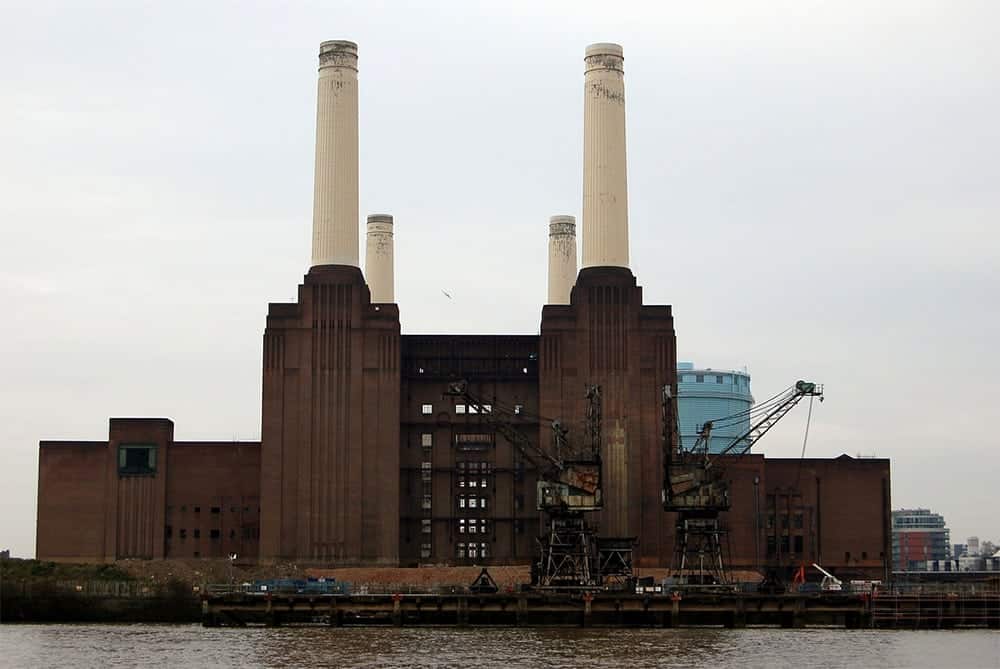 If you’ve been anywhere near Battersea Power Station in the last twelve months, you’ll have noticed that its iconic towers have become a hive of activity, lined with cranes and construction vehicles as redevelopment gets underway in earnest.

It’s been an insurmountable project for countless investors over the last fifty years, but it finally looks like the status of Battersea Power Station is going to be restored. Not as an energy plant, but as a luxury development. Curious as to what exactly is going on? Here’s a recap.

The history in a nutshell

Built in the 1930s, Battersea Power Station is one of the largest brick buildings in the world. It actually comprises of two separate (but almost identical) coal-fired power stations, which produced 20% of London’s electricity until 1983. Since then, it’s distinct shape and lavish Art Deco interior have made it a recognised London landmark and a piece of undisputed heritage – being granted Grade II listed status despite falling into considerable disrepair.

Ideas for Battersea Power Station to be redeveloped have been in the works since the station’s closure. Suggestions have included turning it into a theme park, developing it into a retail and entertainment complex and using it to host public exhibitions. These plans crumbled for many reasons, but usually largely due to the immense cost of maintaining and renovating the listed structure in a way that lends sympathy to its original form.

In 2011, Wandsworth Council gave planning consent to a design by Rafael Viñoly, and the development rights were purchased in 2012 by Malaysia’s SP Setia and Sime Darby for £400 million. The mixed-use plans include a blend of 250 shops and restaurants, leisure facilities, a riverside park, office space and around 4,000 residential apartments. The development will also include a two-mile extension to the London Underground Northern line (due to open in 2020) and a new power plant, with biomass fuels being used to generate energy for the entire 42-acre development.

If you’ve been anywhere near Battersea recently, or even just taken the train into London from further south, you’ll have noticed a hubbub of activity. Construction has been underway for several months and the site is swarming with almost 2,000 workers dedicated to complete the massive project in the next three years.

While it may be very apparent that parts of the site are years away from completion, other areas are ready for public use. The first residents received their keys just over a year ago, allowing them to move into a home in the initial release of 860 properties in Circus West – the “new town” of Battersea.

How to see it for yourself

Although building work continues, Circus West is open and ready for you to have a nose around, with new restaurants and shops opening up every few weeks. There are already a host of exquisite dining options, including an international brand of Denmark’s finest pizzeria, Mother, and an outlet to the exceptional seafood restaurant, Wright Brothers (which can also be found in Spitalfields, Soho, South Kensington and Borough Market – to give you an idea of its calibre). There are a whole host of events planned throughout May, giving you plenty of excuses to visit.

If it’s a luxury apartment you’re after, you will need to make an enquiry – and quickly. The opportunity to own a historic slice of the capital is not only appealing to the British public (Sting and Bear Grylls have already snapped up their apartments), but internationally too. See this guide from Daily Move for more info about purchasing in the capital city.

For those with pockets of limited depth, there might be a long wait. While the plans originally included 636 properties earmarked specifically for cash-strapped first-time buyers and private renters, Wandsworth’s planning committee cut this number down to just 386 at the beginning of last year. This would account for just 9% of the total available properties, although the remaining 250 homes may become available pending an “end of scheme review” to assess the development firm’s anticipated profits.

What the future holds

It’s an ambitious project that will undoubtedly continue to meet the hurdles of public opinion and a slightly uncertain London property market in the face of Brexit.

However, development appears to be continuing with gusto, no doubt encouraged by Apple’s announcement at the end of last year, where they confirmed that around 1,400 employees would be relocated to work from a purpose-built office in the heart of the station. This will secure their position as primary tenant by 2021 by occupying approximately 500,000 sq ft of office space over six floors.

Phase two – the main power station building – is set to open in 2019, which will no doubt boost interest again, ahead of the final completion date in 2025. Providing construction stays more or less on target with the high street opening in 2019 and the tube station launching in 2020, it looks like the towers of Battersea Power Station are securing their place on the London skyline for a few more decades at least.