A shocked mum told how she nearly fed a banana containing a nest of spider eggs to her baby. Debbie Campbell – who has a fear of spiders – says she spotted a clump of white eggs on the fruit as she was about to feed 18-month-old Albie. The beauty therapist screamed when she suddenly […] 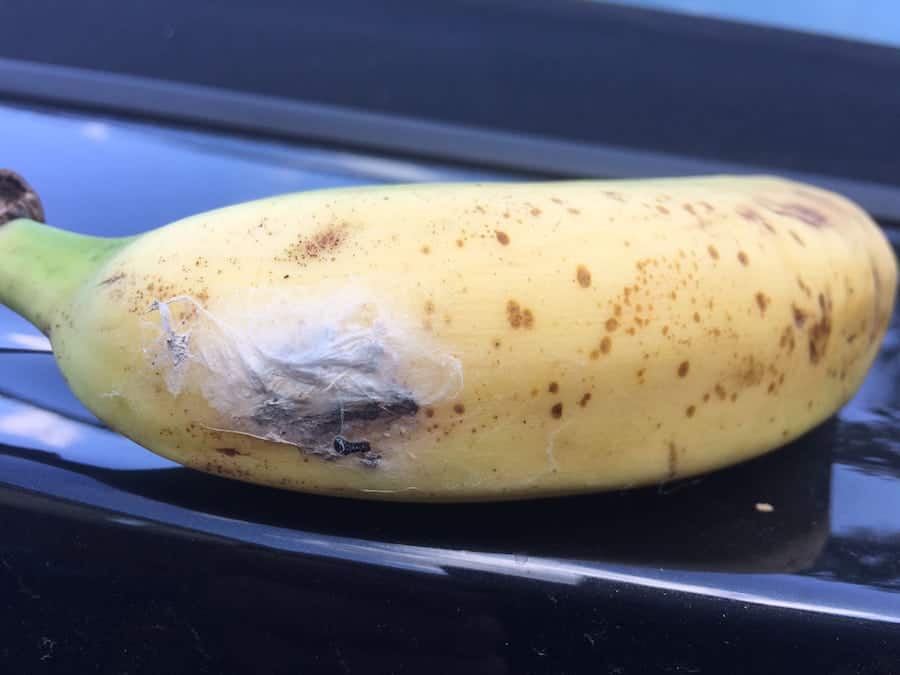 A shocked mum told how she nearly fed a banana containing a nest of spider eggs to her baby.

Debbie Campbell – who has a fear of spiders – says she spotted a clump of white eggs on the fruit as she was about to feed 18-month-old Albie.

The beauty therapist screamed when she suddenly realised the white mark on the fruit looked identical to nests laid by the world’s most venomous spider, the Brazilian Wandering Spider.

The arachnophobic mum immediately returned the loose bunch bananas to a Tesco Superstore she had bought them from in Milton, Cambs., on Friday.

Ms Campbell, from Cambridge, said: “When I Googled it the first thing that came up was Tesco spider eggs and I didn’t even finished reading the story.

“I screamed, grabbed my partner and said look at the banana and look at the picture and please tell me that’s not it.

“I had heard of it before but I never expected to get it in mine.

“They need to check them more because it’s not as rare as some people are saying.”

The mother spotted the spider nest as she was packing food for her son Albie for a family day out on Saturday.

The shock discovery saw her frantically place every piece of fruit she had bought from the supermarket in a bag and return them to the store.

“I’m petrified of spiders and I couldn’t even think, I just wanted them out,” she said.

“To think that anything could have crawled of of that and get in my house, I would probably just moved.

“My older son was saying sometimes the mother spider can hide in the nest and that made it even worse.”

A Tesco spokeswoman said: “We sell millions of bananas every week and our growers work hard to clean and inspect all our fruit carefully.

“However, given the freshness of our produce, this sort of thing can happen on very rare occasions.

“We would like to apologise to Ms Campbell and will be investigating with our supplier.”