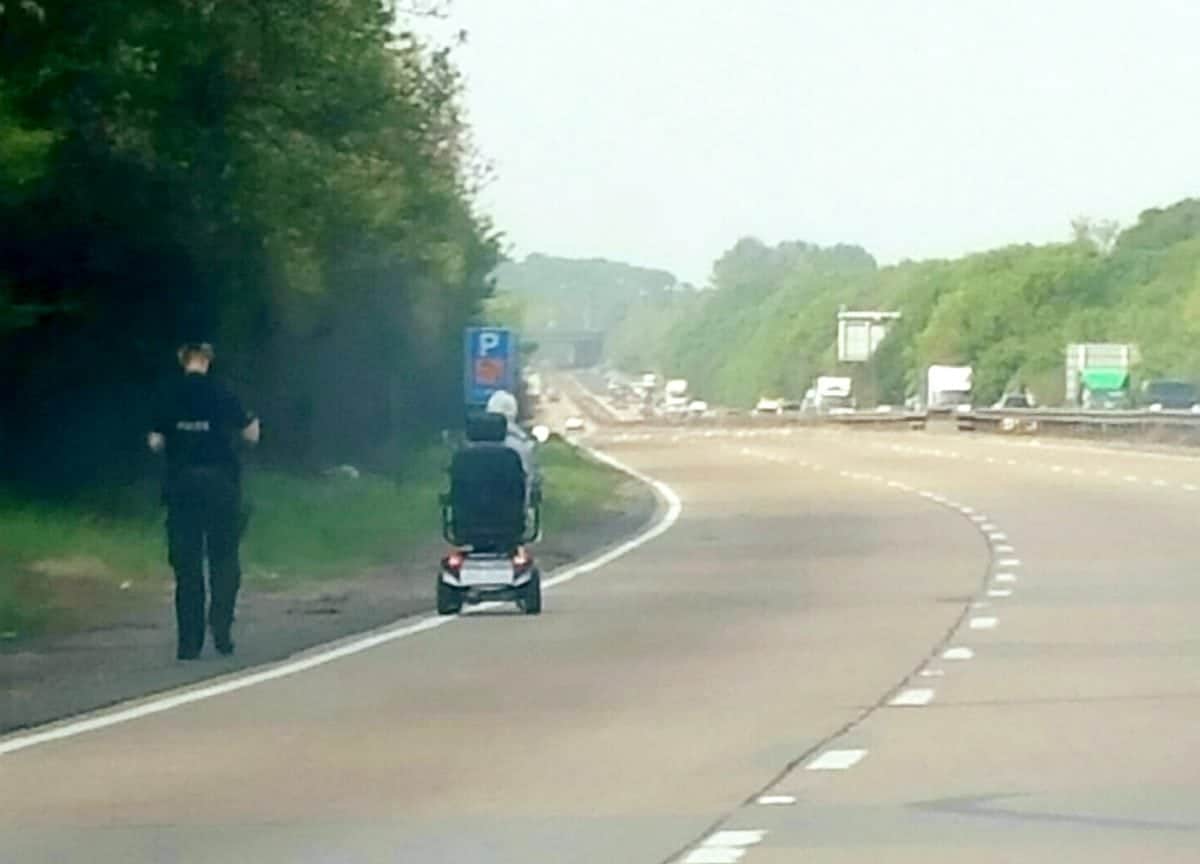 An elderly woman took a wrong turn and ended up on a busy dual carriageway – while riding a mobility scooter.

The disabled pensioner was spotted driving at around five to ten miles per hour in the left hand lane of the A12 in Marks Tey, Essex.

She caused travel chaos as drivers swerved to avoid her and had to be escorted to safety by police officers who set up a rolling road block.

One driver described how they “nearly ran into her” as they were driving to work.

Jay Butler, 44, said: “She was seemingly completely oblivious, like she was off to do her shopping.

“It looked like several people had to take action to avoid her.

“To be fair, it is not what you expect to find in front of you on a fast road. She was pretty lucky not to get hurt.”

Jay, from Suffolk, added: “The danger was that people couldn’t see her once she was behind another vehicle, so for anyone joining the carriageway it was incredibly dangerous.

“I first saw her as I drew close the the Stanway turn off and she was still travelling along the road after I had passed her.

“I could see her in my rear-view mirror and traffic was starting to build up around and behind her when I finally lost sight.

“She must have been on there a good while afterwards too as there were no police in sight for a while.

” I did see a few people having to brake hard and swerve coming off the slip road entrance onto the A12, as they were obviously speeding up to join the motorway when they almost ran into the back of her.”

Following the incident on Thursday, Essex Police took to Twitter to post a picture of the woman, apologising to motorists for the inconvenience she caused.

They wrote: “Vulnerable female took wrong turn onto A12 at Marks Tey – the team had to put in a rolling road block and escort her to safety – sorry if you were slightly delayed.”

In a statement, the force added: “We were called to concerns for the welfare of a woman on a mobility scooter on the southbound A12 near Stanway at around 8.30am.

“We located the woman and brought her off the road and ensured her safety.”

Government guidelines say that class 3 mobility scooters should use the pavements where possible. If used on a dual carriageway the driver should use a flashing amber beacon.

Caution is advised when using the road and drivers should use a reflective jacket.

The Highway Code adds: “When negotiating major roundabouts (ie with two or more lanes) it may be safer for you to use the pavement or find a route which avoids the roundabout altogether.