Legendary cheese-chaser Chris Anderson hurled himself into the record books for chasing a wheel of Double Gloucester down a super-steep hill - in an annual tradition that is regularly dubbed 'Britain's barmiest race.'

by Ben Gelblum
in Food and Drink, Sport, Weird News 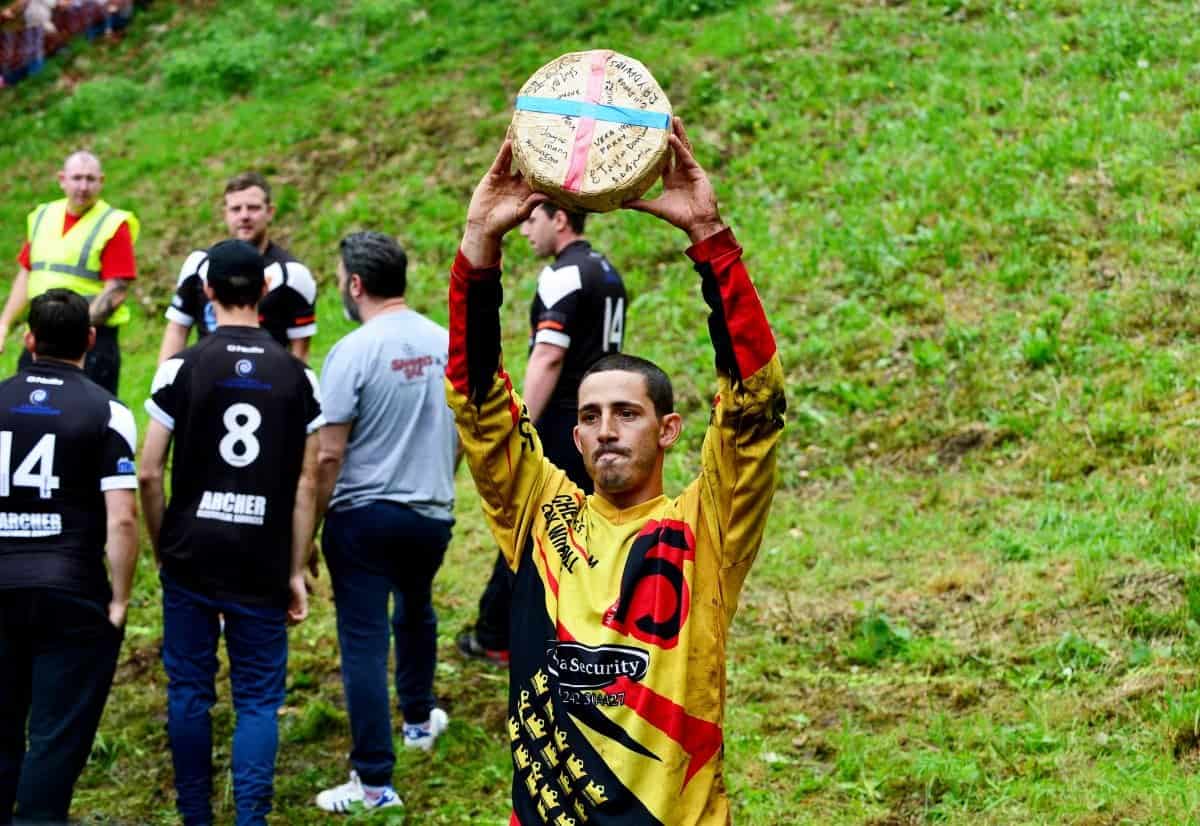 A soldier was named the gratest athlete in the world today after his record-breaking 21st win – at CHEESE-ROLLING.

Legendary cheese-chaser Chris Anderson risked life and limb – well mainly limb – hurling himself into the record books for chasing a wheel of Double Gloucester down a super-steep hill.

Thousands gathered to watch one of Britain’s wackiest sporting events, where runners sprint (and tumble) after a heavy cheese that goes hurtling down a steep hill at break-neck speeds.

Chris, who was just 17 when he won his first event, came first in one of the five races at Cooper’s Hill at Brockworth, Gloucester, yesterday, during the annual bank holiday tradition.

He said: “I won’t be here next year I’m on holiday but we will see I don’t want to say its my last year.”

As each hand-made, 1ft wide wheel weighs 9lbs, the 30-year-old soldier has taken home an impressive 189lbs of Double Gloucester over the years – enough for more than 3000 cheese sandwiches.

But remarkably, brave Chris, who smashed fellow legend’s Stephen Gyde’s record of 20 wins, has said in the past that he doesn’t even like cheese – he just likes chasing after it.

Local boy Chris has been crowned the ‘King of Cooper’s Hill’ for his record-breaking win – which came off the back of a remarkable three wins last year.

Thousands gather every year for the barmy tradition – which sees runners hit speeds of up to 70mph as they hurtle down the ultra-steep 200yd hill.

Injuries are common, but because the hill was so muddy this year, the ground is softer and there are likely to be fewer breaks than during previous competitions.

Chris, who serves in the Rifles Regiment based in nearby Chepstow, had to sit out the 2014 competition due to injury.

The world-famous Cheese Rolling features five different races – three for men, one for women and a safer uphill chase for children.

Runners hurtle down the steep slope after the rolling cheese and injuries in the past have included broken arms, legs and even backs.

The last official cheese rolling was held in 2009 following health and safety fears.

But the event is returned unofficially ever year since – without proper medical cover or insurance.